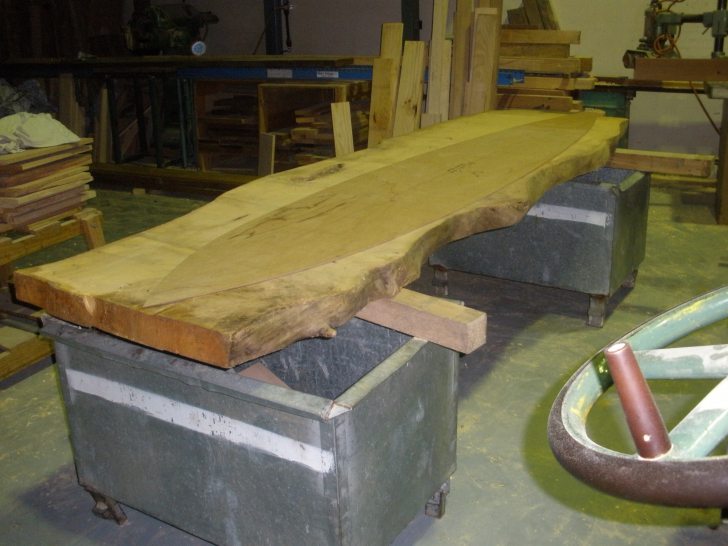 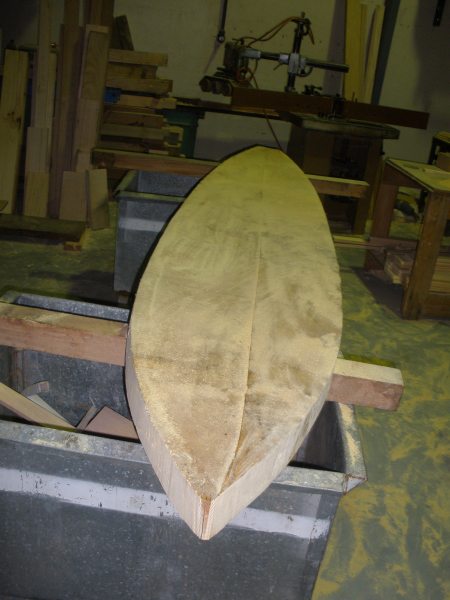 That's redonkulous! Can't wait to see that finished. Looks like a Jim Phillips project, and I hope you know that's about as high as it goes on my scale.

All this finless talk made me dig around in my shed to find one of my little experiments from 20 years ago. Now I have to shoot some pics and put 'em up here....

4'3'' x 22.75''. I rode it for a while 20 yrs ago, but some of the neighborhood kids loved it so much I ended up loaning it to a family for about 5 years. It sat in their backyard so it could get a suntan. PU/PE, all those crisp edges sanded by Larry Pope.

I've had it back in the water lately (yes, I know I should have fixed the dings first). Kids still like it but I haven't been able to stand up on it anymore, too old. I had a 6'0'' x 170lb guy who's primarily a really good longboarder ride it and he had enough fun that he wanted to ''borrow'' it. 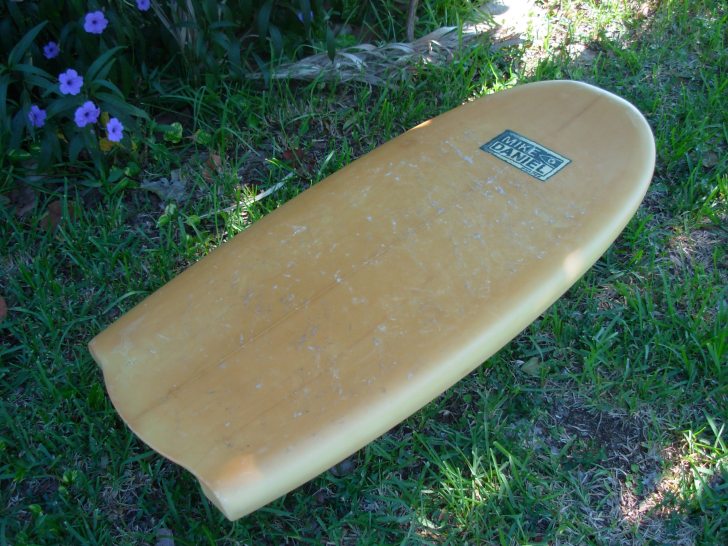 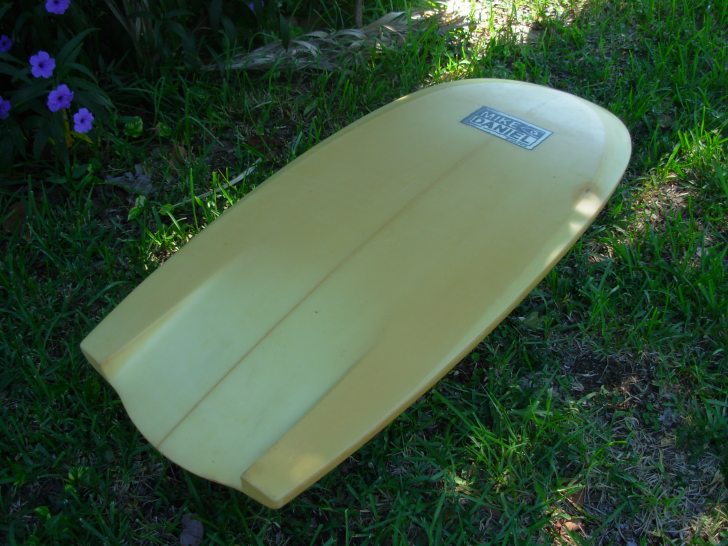 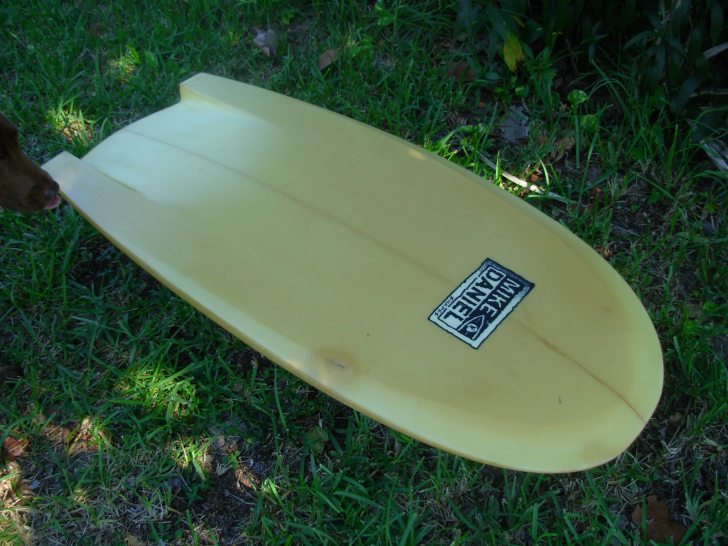 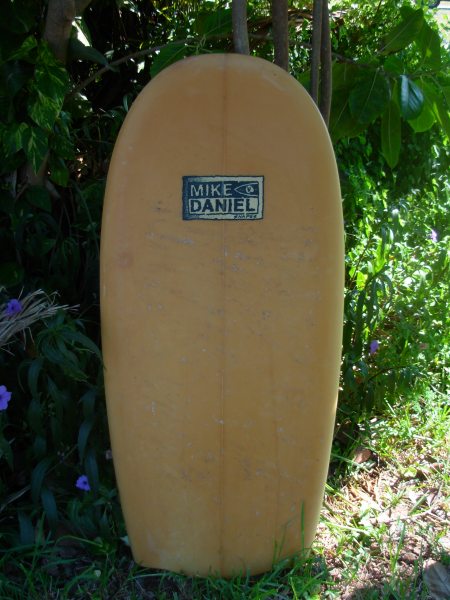 That's pretty neat Mike !.....and could inspire anyone with a broken longboard layin around in the backyard!!

What's it got a 17 inch tail? I can see why kids like it, or a younger (lighter?) Mike might have liked it. Given the way its likely to be surfed, someone coming in around 150 plus [or possibly plus plus] might want the full 22.75 to run all the way back, unless their on some pretty big waves.

Also, I have no idea how the contour worked, but damn, it does make a statement. Sort of reminiscent of the razor hair-cuts and hard-edged fashion of the same period when it was made (-i.e. 20 years ago that is).

I like it, awesome story too but the story needs to continue, get a ripper on it, maybe a few pics too....ever inspired to do another ?, continue the evoltion 20 yrs down the track ??? c'mon, you can do it.....

kc, you'd enjoy the physics of this one - water gets pulled up into the ''tunnel'' with any forward motion, much like some of the modern flats boats that use this principle to allow the prop to run above sea level. On the board it provides a force that holds the tail down, as well as making sure the walls of the tunnel are fully engaged with flow (which provides the lateral stability).

These comments are made for the sake of those who like to push their boards around on flat water, run garden hoses across their fins, or stare at underwater photos for hours; all in that quest to figure out just exactly what is happening down there. IOW, the truly obsessed.

My take, and call me crazy, was that it was likely to operate as a “twinzy-cheater” (I just pulled that term out of the air - at this point its likely to mean little.)

So my my guess would have been, given the steep walls of the concave, that you'd basically created a sort of bizarre tapered fish with a lot of tail-rocker and really shallow twins – hence the 'twinzy-cheater'.

Of course, the twins won't be of much use (-i.e. perform much in terms of fin function), unless you're sitting on them - i.e. your weight was loaded towards the tail.

But then again, I've been wrong before.,, or to coin a phrase "I'm no Floridian, and I've papers to prove it."

The walls were definitely intended to act as ''fins''. The board does have some lateral stability, but still spins pretty easily. Riding that line is where most finless design is likely to occur, it'll be cool to have someone like you evaluate some of the different approaches.

A few years after doing this one, I was around for the birth of the ''finless'' wakeboard. The bottoms got really crazy then. Some of the current finless surfboards are using very similar contours.

The walls were definitely intended to act as ''fins''. The board does have some lateral stability, but still spins pretty easily. Riding that line is where most finless design is likely to occur, it'll be cool to have someone like you evaluate some of the different approaches.

Throw some short ultra low aspect fins on the rail to "extend" the walls to a more standard fin depth, and see if it still spins out...