Keep it up mate, i feel like noone cares and then you say thanks for the post some times and it makes me stoked!

BTW moving house this friday, and i wont be getting the boards finished before i go which is sad. and just life. 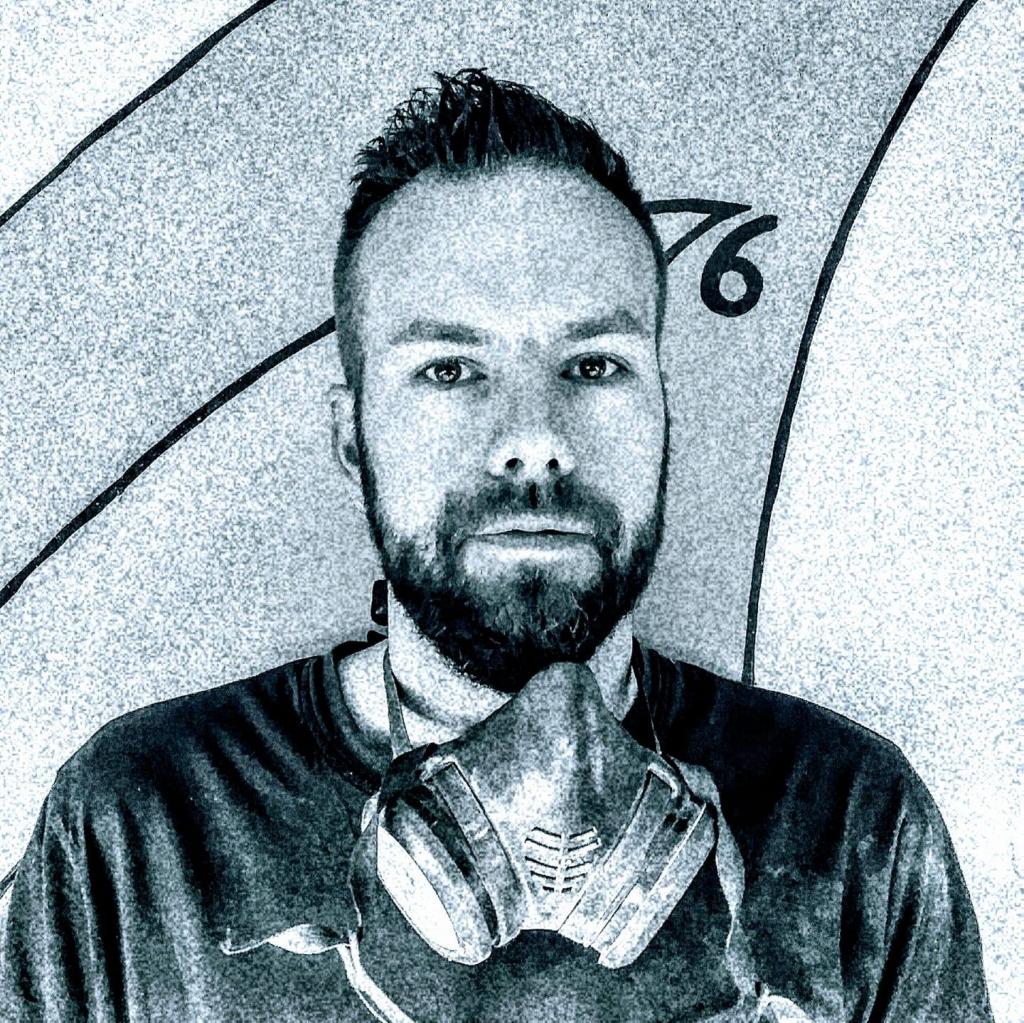 I´ll second that. Keep it up. Even if there are no answers sometimes, I bet there are a lot of silent followers out there.
I´ve always followed this thread with great joy as a silent unregistered guest.

Thanks for the encouragement! Here's what I'm thinking for my next board...

A tangent off the Gordita, probably using the same big boy blank, which worked really well for the Gordita.  This one more shortboard oriented in shape, whereas the Gordita was more fish or stubby oriented.  An inch narrower, with a pulled in nose, thruster fin setup, and single concave.  But similar foil, rails, and rocker to the Gordita. 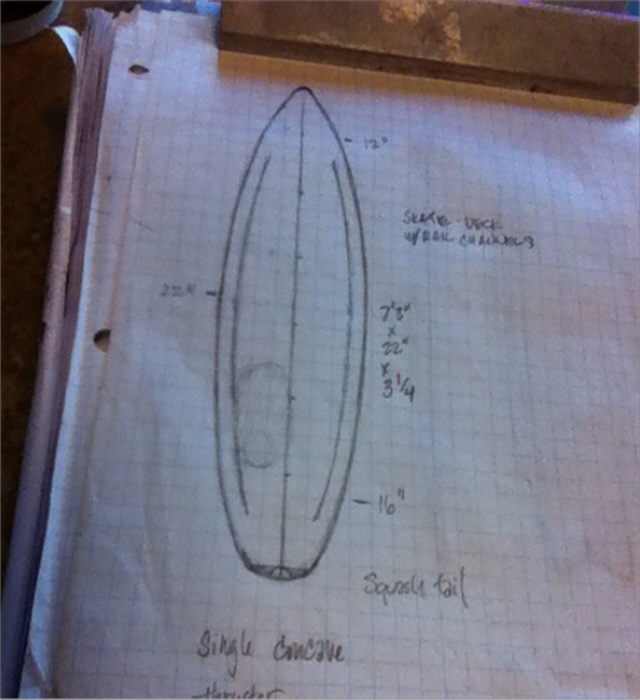 Michael Junod is an established shaper with a reputation, cool for me to see that he's working in the same general dimensions that I have been exploring as well, The Joe Blair zone haha!  This has to have been a custom for a big guy (or old guy). 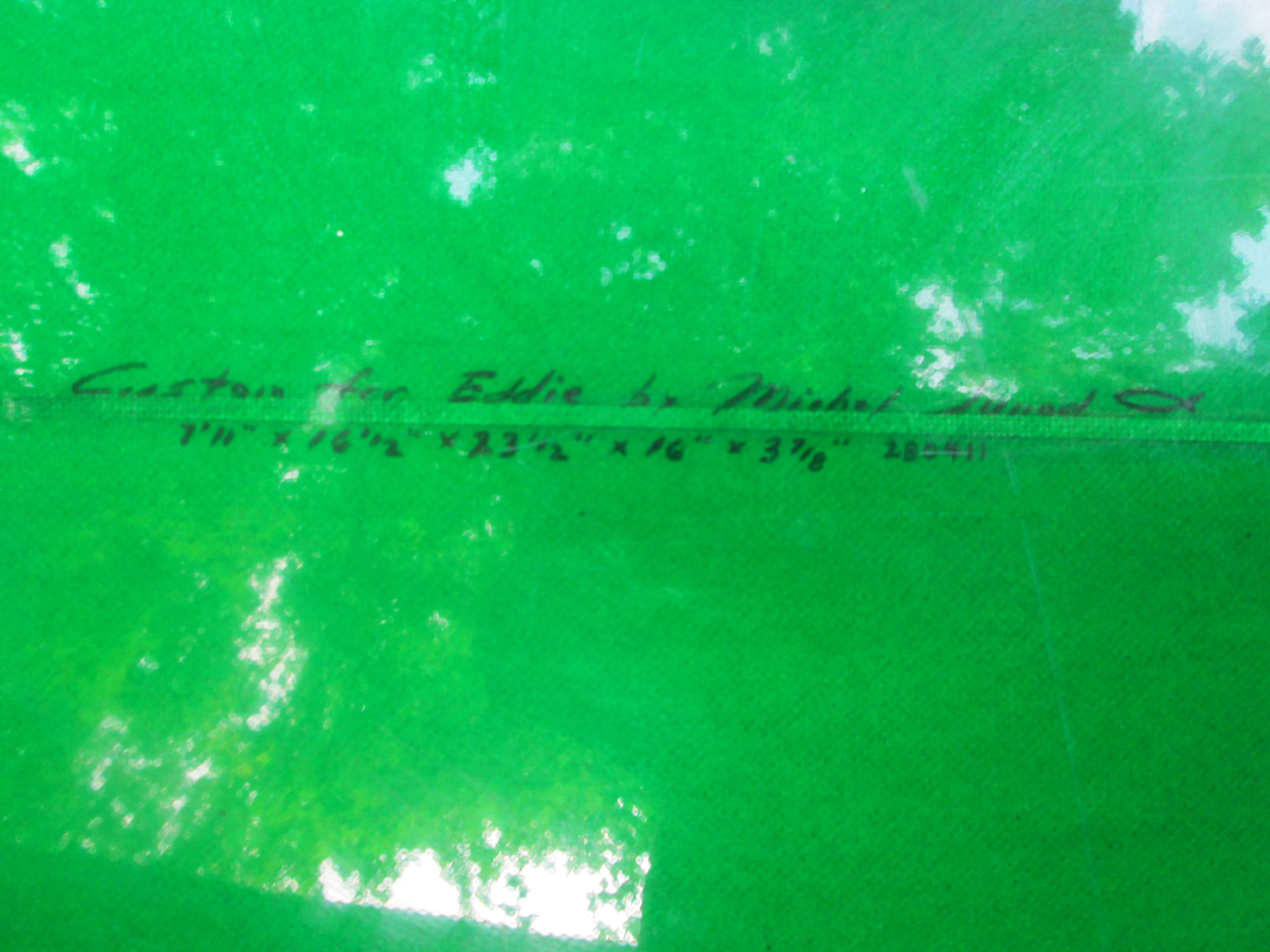 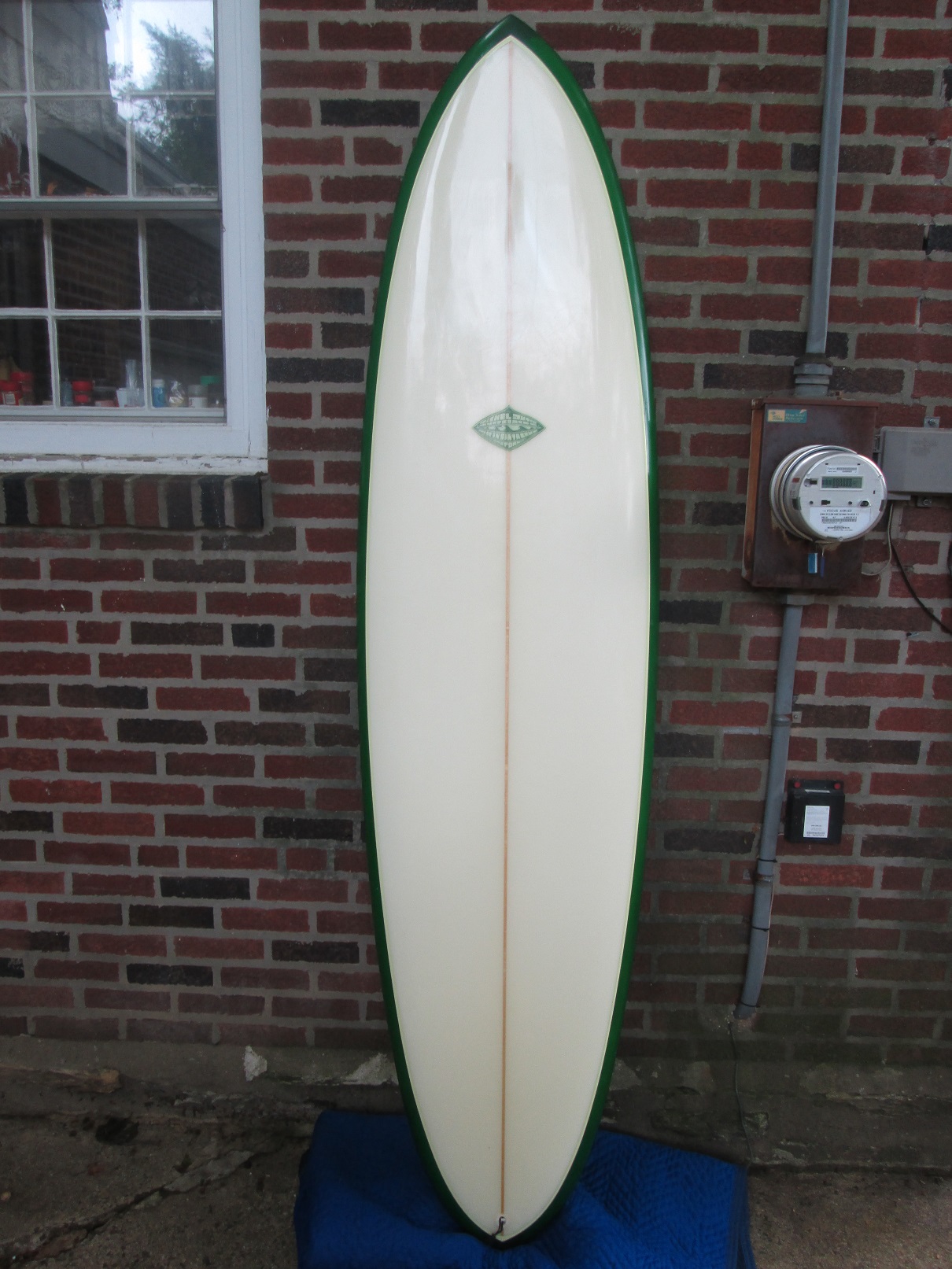 The sketch of your outline looks nice an clean. Are you planning to do railchannels again ? (I guess thats what the stripes are for in your sketch).
22x3.1/4 would suit me well, too.
I noticed (since I started reading here in 2015) you like a little more volume in most of your boards. Thats why I´m always curious when you tell about your boards and your shapes and why I´m following this thread closely.
Beeing a big guy and on top of that landlocked, I like to have a little more foam as well. I never felt a 22 (or even 22.1/2) wide board would hold me back or be a disadvantage, and I feel like everything under 3 is simply to thin for me.


That Michael Junod outline is pretty sexy.
23.1/2 and 3.7/8 are quite "remarkable", but hidden well in that shape.
I will keep this as a good example next time my "98 pund weakling" buddies tell me my 22 wide /  3 thick boards are tankships.

That bit of extra volume takes a little getting used to, but comes in handy in a crowded lineup with no consideration for age. I have also seen Stretch boards in this same general size.

Yes it is planned to have rail channels like the gordita.  I am not a large surfer, but age and aggressive crowds have pushed me into riding these. "big boy" boards, and it's been working pretty well for me.

Currently I've been dialing back the volume a little to see if I can keep my advantages but get just a tiny bit more performance. 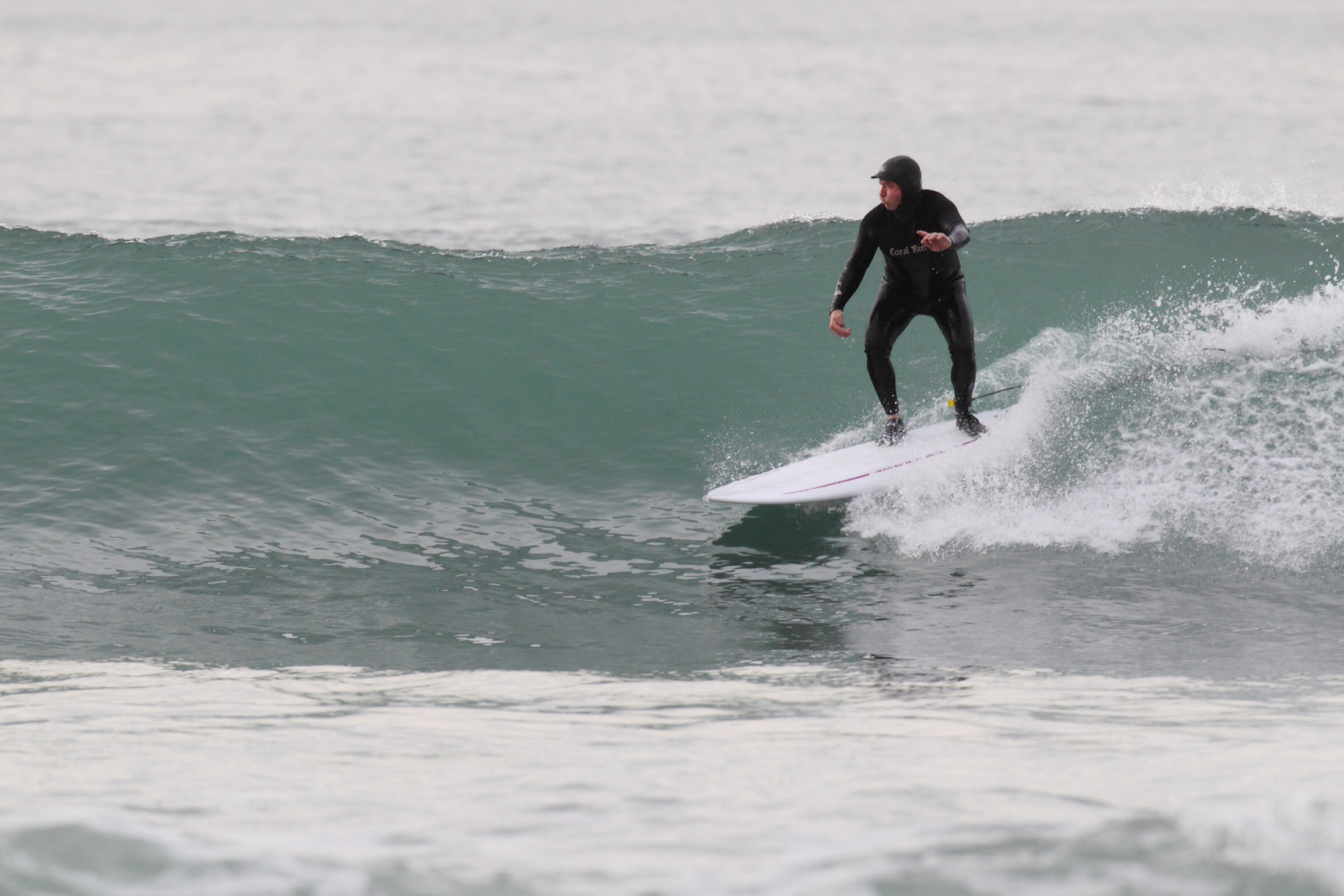 Nice picture !
(I know all the other pictures of you surfing, nice to watch everytime)

"I am not a large surfer, but age and aggressive crowds have pushed me into riding these."
I know, I´ve read every single page of this thread. :-)

By far I neither got your surfing- and shaping- experience/knowledge, nor do I have your surfing skills. I´m only 37, so quite young.
But: I get a lot of inspiration and ideas from your concepts and all the thoughts in this thread.
If you ask "Why?". I´m struggling with arthritis since I´m a boy, the doctors always estimate me 20 years older judging by my x-rays. Which means I´m simply not as elastic as most of the other guys in the water.
That plus beeing big guy, plus beeing landlocked and only surfing sporadic means I´m looking for some "advantages" here and there as well.

Thanks for sharing your thoughts and your experience. It´s a good source for inspiration for me.

Glad to hear I could be of some positive good here, sorry to hear about the arthritis but lack of flexibility comes with age too as you say.

In this regard, the bigger boards also make a stable platform for pop-up, which has proven beneficial as well.

As far as a prevailing prejudice against these larger boards, I encounter this too, but take my solace in my wave count and fun factor.

Huck
Last seen: 15 hours 55 min ago
Joined: 12/07/2009
Haven't shaped anything new for awhile, jonesing to mow some foam. Life and all its weird circumstances kinda getting in the way lately, but been getting plenty of waves, up until this week. Started a new job in Hollywood, missing my beachside project, but still have work there when I can get to it. Same property owner on both projects. So I have had plenty of time to ride my volume-laden boards, and reflect. Still considering my foray into surfboard design for the aging surfer to be successful, even 'tho most people find the subject "taboo" to talk about, let alone pursue. Funny to me cuz we all grow old eventually, but its easier to put it out of mind. I know a lot of older guys turn to longboards, but the truth is longboards were never specifically designed for older surfers. Maybe I've been a little too successful, I've gotten more than one complaint that I get too many waves. I am not a snake or a wave hog, but one friend told me the problem is that I sit at the top, and get the best set waves, so it appears I'm getting all the good waves. Anyway, I get good waves when a lot of guys don't, and I'm having fun when it seems not everyone is, so I'm counting that as a win. Bummer about the other stuff, but oh well, I'm not there every morning any more since starting my new job anyway. And when its really really good, and the hot-shots take over, I can barely get a wave, so I take what I can get when I can get it, haha. Reflecting on that, I'm sure another thing is that a couple of the dawn patrol guys I surf with have a tendency to paddle for a set wave, then back out at the last second. Don't know how you guys deal with that, but me, after a couple times I will go anyway even when I see them paddling. I tell them don't worry, if you go I will kick out, but I think they get psyched out when they see me paddling, and then feel like they would have gone if it weren't for me. I just think if you let a couple good set waves go by just cuz you looked down the ramp and changed your mind, then don't beef if someone takes off next time even 'tho you're paddling. Its a tricky situation, but in crowded L.A. surf a wasted set wave is a sad thing, IMO. I'm guessing that's part of the problem. And the other thing, I hate when guys sit right inside me, and kinda block me from paddling for a wave, then take it themselves. So when they do that, I run right over them, well, mostly I veer just left of them (its a right point) then turn hard on takeoff. That sounds kinda rotten I guess, but it happens a lot and I never sit right inside anyone else, I feel like if you do that you take your chances when they go for a wave. Maybe I need to re-think that, haha. Like to know what you guys do in those situations. As we age, we lose muscle strength, stamina, and our balance and reflexes aren't what they used to be. Everyone is different, but most of us over 60 can physically feel a difference in the way our bodies respond now from how it was 30 years ago. These are all things that can be addressed in a surfboard's design, so that's my idea. Paddle power and stability, with a board that responds a little more like a shortboard than your average longboard, so to speak. Paddle easy, stable on the popup. I find the boards are still more trim than pump, but I find them more responsive than my longboards, and handle late or steep takeoffs better than my longboards. My next project that I'm now planning is kinda like a scaled down "beachcomber", a shortboard-type outline but in a bigger version. The beachcomber is 9', I'm thinking 8' for this next one. I can ride shorter boards, but 8' seems like a real comfortable length for me right now. I had planned to go shorter in a previous post, but now my thinking has swung back to 8'. So a board with a narrow pulled in nose, with the foam in the back half. Kinda like the picture, but 8', and thick. Still planning to use the 8-2A from US blanks, I love that blank! My photog buddy showed up the other day and said he got some pics of me, dunno if or when I'll ever see 'em, but I told him I'll buy whatever he's got. Thinking back, I met him because he was shooting pics one day, and kinda singled me out not cuz I was ripping by any means, but according to him, because it looked like I was having so doggone much fun. Hope y'all are getting waves and having fun!! 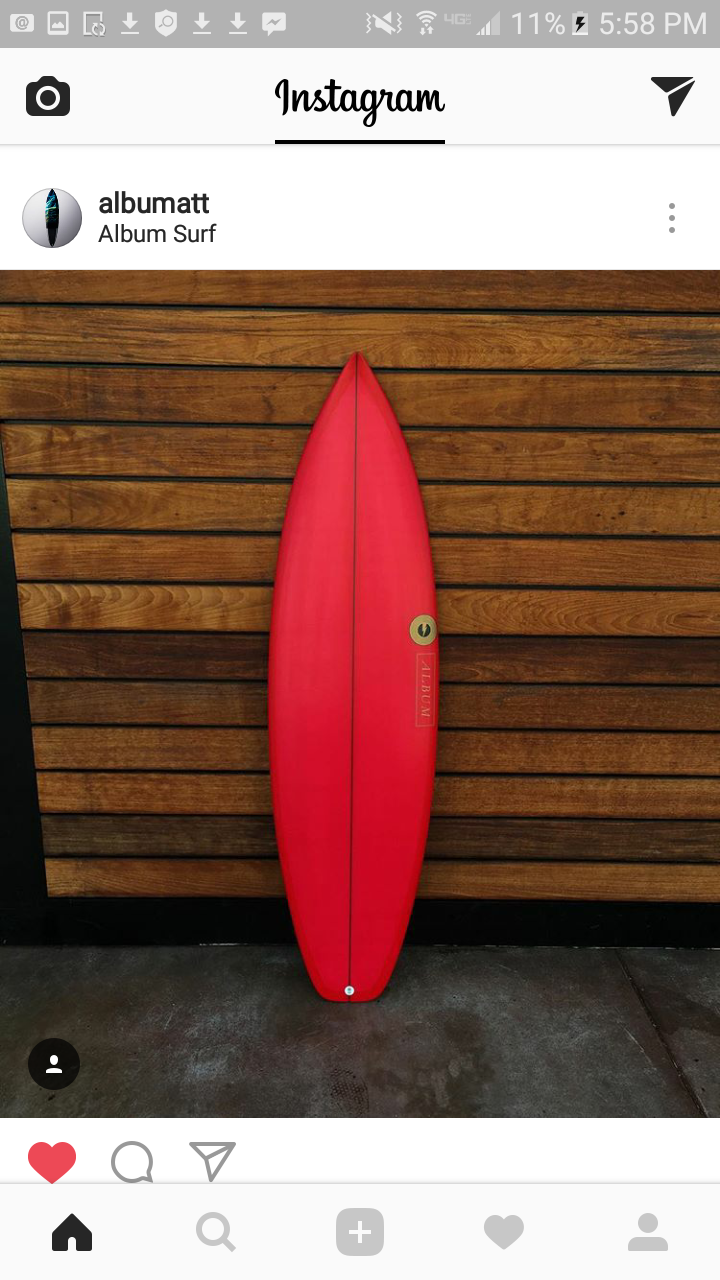 L.I.T.
Last seen: 2 months 1 week ago
Joined: 10/08/2014
Hi Huck, generally I agree with you; I'm of the philosophy of "no good wave should go unridden". Paddling for a wave and then backing off at the last second is a no-no, so, on the odd occasions it happens, if I see someone else paddling out on the shoulder and I don't think I'll make the takeoff I'll call them in. And if it ends up being me backing off and no-one else getting onto it, I'll paddle out wide to the back of the queue and wait for the rotation to bring me back into the takeoff zone. What bugs me the most though is when the summertime crowds hit at my local and the hustling for waves gets taken too far with the result that 80 to 90% of the set waves go largely unridden.... even though there's a surfer riding every single one of these waves. Sound a bit self-contradictory? Here's what happens; the summertime tourists crowd the lineup so much the locals push each other deeper and deeper on the takeoff and because they're good and can make a late drop, they'll make the takeoff, but because they're now taking off too deep, they'll bottom turn behind the curl and spend the first 2/3rds of the wave chasing the section trying to get around the whitewater and back up into the curl and out onto the face, and hurling abuse and threats at anyone who is in the perfect spot to takeoff and make the most of that unridden curl and face that's currently being UTTERLY wasted. So not only does 2/3rds of the wave go effectively unridden, it's the BEST 2/3rds of it as well. Aaargh!! On these days I'll sit in the right spot and wait for the very occasional wave where whoever's riding it wipes out and I can take off and do that unridden curl and face justice. But so much of the time I've got to watch wave after wave after wave go by. All of them largely wasted, thinking to myself "this is just STUPID". A lot of the summertime tourists have no idea what they're doing,.... but the locals should know better than this.
like
1
Top