You might actually like a twinzer.  I should have thought about that before.  A twinzer puts a leader fin ahead of the main fin with the trailing edge of the leader overlapping the leading edge of the main by 1/4", and at a 10* cant to provide some extra hold.  Those take all the drama out of riding a twin on your backside.  At your weight you just need to be careful to not overfin the board. 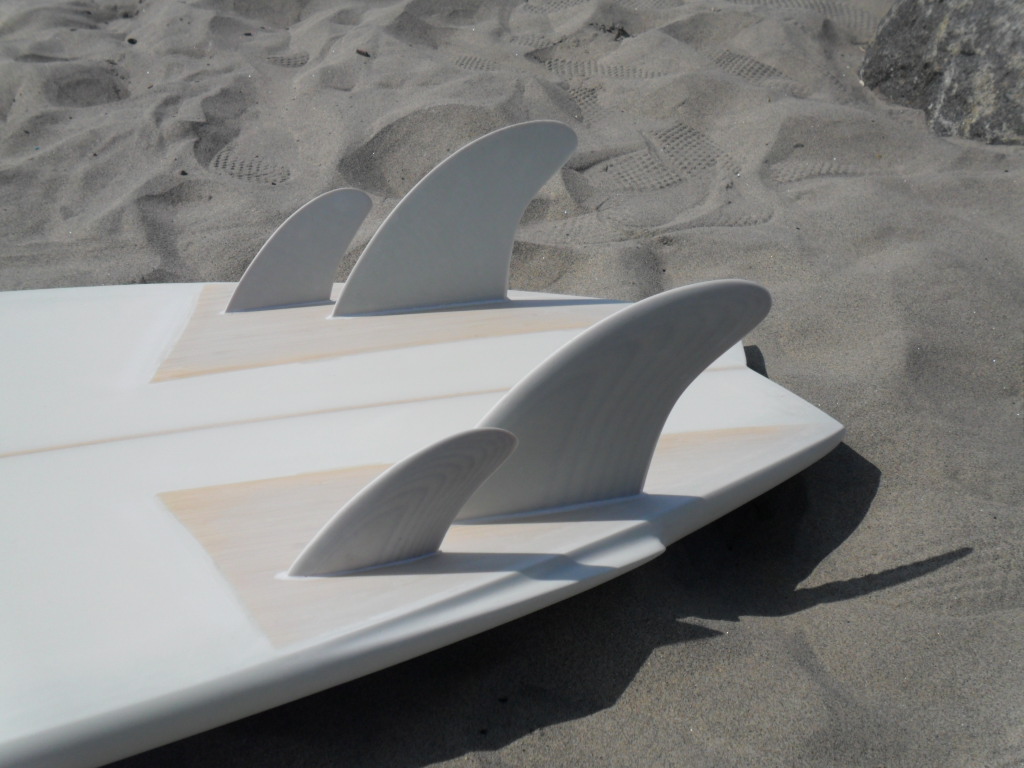 I know i keep harping on this, but another alternative you might consider is the 2+1 the way that Neal Purchase Jr does them.   If you watch him surf he stands more forward in a closer stance and can still wrap the board around pretty well because how he does the 2+1 cluster (which is different than what other shapers do).

That's a great little vid you found there.  My stance isn't quite as narrow as his but his little red sled looks really fun. The video shows him surfing that board and then cuts to a shot of some 7'0" dims, but unless he's more than 7ft tall those dims are for a different board.  I had a 7'2" Walden 2+1 Mini Magic for a little while and had few fun sessions on it.  Other than that, I haven't really tried a 2+1 setup.

Same goes for twinzers - no experience with them but it looks interesting.  How does it differ from a quad in terms of performance?

Quote:
Same goes for twinzers - no experience with them but it looks interesting.  How does it differ from a quad in terms of performance?

For his personal boards, NPjr posts 6-0 lengths more/less for his own daily drivers, and longer for his step up boards.  His designs have zero in common with anything Walden does.  If you look around you can sometimes see some examples listed on Mollusk's website, as well as others.

The thing I came to understand about his designs from watching him surf them is that his shapes are aimed directly at the fin setup and manner in which the board will be surfed. Some other shapers do that too, but not everyone does that.

If he was going to shape a thruster that he intended for someone to surf from the tail he'd set that up differently than a board he intended surf from a more forward position.   If he's going to surf the board more from the middle he gets the foil and distribution going that way, too, so the board will more naturally trim for him under his stance.

Dave Parmenter (Nowtro surfboards) is another shaper you might have some interest in if you look, and he's probably more local to you.   He was one of NPjrs influences along with NPsr (the dad).   These guys are all legit and doing their own thing.

If you start building your own you'll be able to test some of these ideas out for yourself to see what you do and don't like; what does and doesn't work for what you're trying to do.  That's the whole point of Swaylocks.   You wanna work your own progression.

Thanks Gdaddy.  I really appreciate your thoughts on this.  It’s interesting to get your take on varying the fin setups to accommodate some of the issues I mentioned at the start of this thread.

I’ve known about Swaylocks for a long time and have often relied on it to help answer questions I have about board performance and design characteristics. But I’ve never posted here before out of respect for the community it serves.  However, after having three very different conversations with shapers I thought it appropriate to ask members of this community for some input.  Apologies if I intruded.

In my field of work there are artists, craftsmen, and tools.  Artists are visionaries and are passionate about sharing their skills and ideas.  Craftsmen are masters of technique and excel at executing and improving upon the ideas of others.  Tools have no creativity or desire to share what little knowledge they may have.  They might get the job done, but only because someone tells them exactly what is needed of them.  Tools tend to be the most insecure of the bunch and often pride themselves in experience rather than accomplishment.  A 60-year old plunger might be fine at sucking up shit but it's still just a plunger.

I think the same three categories can probably be said of shapers.  In case, you’re wondering, McDing, you’re clearly a tool (probably a plunger).  To everyone else, thanks for considering my post.  May you find your own progression.