The Bing “AUGA! BOARD” was made at Bing Surfboards factory in Hermosa Beach, California USA during the late 60′s by Steve Barger. Steve worked at the factory. Steve, Craig Forrest (RIP), Tom Warren (The AUGA! Men) rode these boards in the South Bay (Redondo Beach, Hermosa Beach, Manhattan Beach) doing 360′s all over the waves and blew peoples minds.

They moved to Maui in the early 70′s where they live today. The AUGA! Men were seen ripping up the waves at Lahina Harbor, Shark Pit and Honolua Bay.  They also surfed these spots at night using scuba dive flashlights! They were in a movie called The Sunshine Sea (Old title “Waves of Change”) doing many, many 360′s. by MacGillavray/Freeman! The AUGA! Men appear in “Pacific Vibrations” by John Severson. Steve Bingham featured the AUGA! Men in his movie Planet Aura.

Wayne Olsen of Manhattan Beach, California shaped some AUGA! Influenced boards that he Paul Olsen and Michael Wallow (RIP) surfed all over California and Baja. Jim Hart of MB was also seen riding an AUGA!

How I ended up with a Bing AUGA! Board

Here is the funny story about how I acquired the Bing AUGA! Board. I was a factory rat at Bing's factory on Cypress Street in Hermosa Beach in the late 60's. I will always remember Rolf Arnesse's world champion purple board hanging on the wall (that board is missing according to BING Copland).

Steve Barger inventor/shaper of the AUGA! Board showed it to my friends and me. He was really excited and said it was the board of the future and that all boards would be finless someday. The short board revolution had just started so the boards and fins were much improved in a short period of time. Finless boards were a thing of the long gone past. I occasionally saw Steve and friends ripping on the AUGA! Boards in Manhattan and Hermosa Beach. The AUGA! Men moved to Maui in the early 70’s.

Fast forward to the late 70's and my mother shows up with the Bing AUGA! Board! She bought it at a garage sale for $1.50 in south Hermosa because she recognized the Bing logo. All my friends tried it but Roddy Williams (LA County Lifeguard and North Shore Oahu underground hero) was the only one who could rip on it standing up. Even knee boarding the AUGA! Board was difficult.

I left the board in my front yard in North Hermosa so friends could borrow it whenever they wanted. Tom Hanson left the board at the beach and I could not find it after hours of searching. Three months later I found it next to a trash can at the beach a few blocks south of where it was left!?!

I had Pat Ryan of ET Surfboards shape me an AUGA! Board with a deeper, longer concave and softer rails. I rode it for 5 years all over California and Oahu as a kneeboard. I also rode it in ASA, WSA and NSSA contests but that story is for another time. Vince Ray 310-370-1918, surferjay@losangeles.usa.com

I showed the board to Bing Copland at the “Legacy of Bing” book signing at ET Surfboards in Hermosa Beach in 2008 and he could not believe any of the AUGA! Boards with a Bing logo had survived because they only made 2 or 3 of them. Bing signed the board. He wanted to put the AUGA! board in his book but had little information and only one photo.

The Bing AUGA! Board I own and photos of the AUGA! Men were shown at the “Legacy of Bing “ exhibit at the Surfing Heritage and Cultural Center in San Clemente California USA from March 3, 2014 until May 15, 2014. Link to video of show- http://youtu.be/V61j2khYVnw 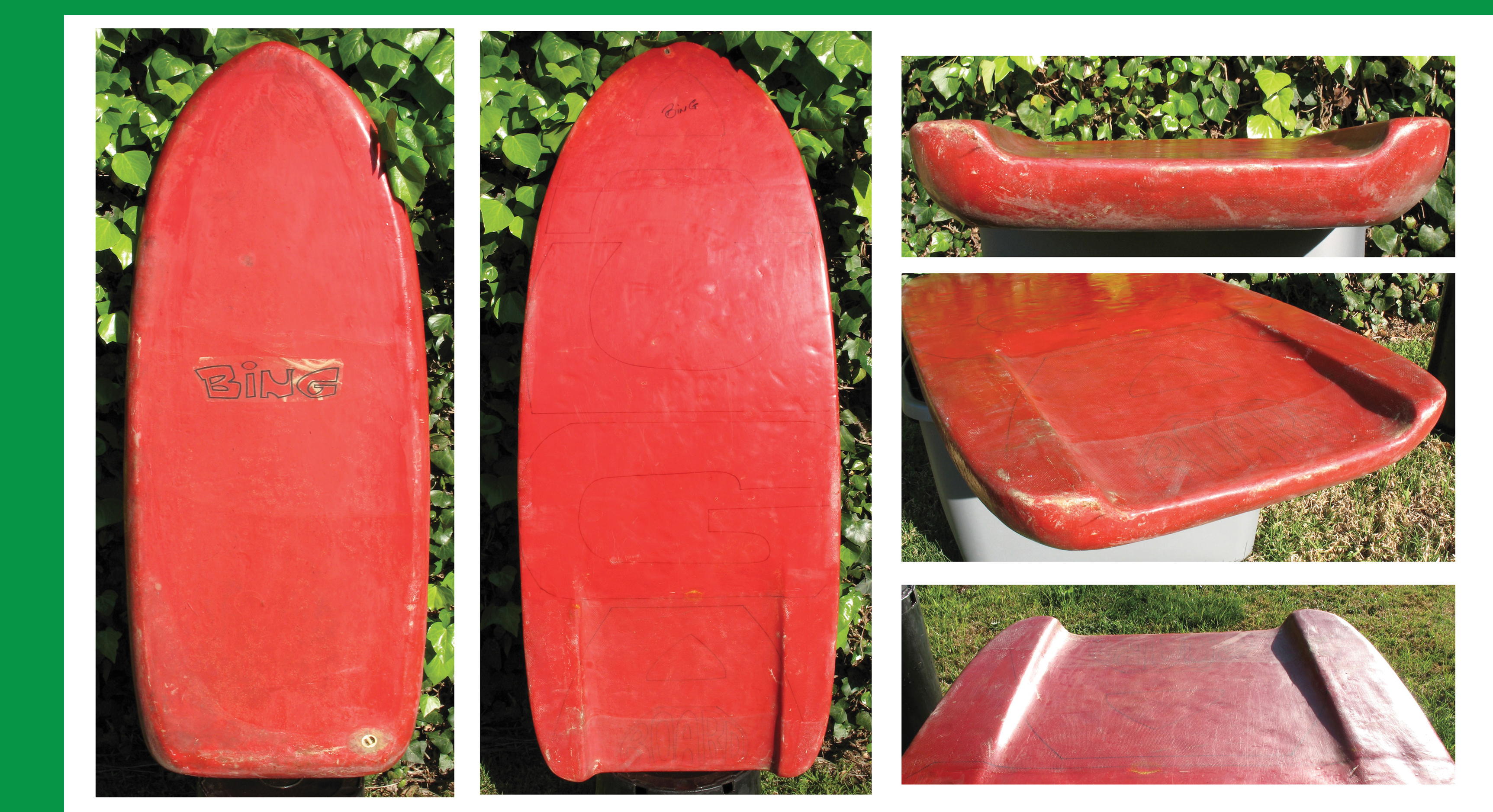 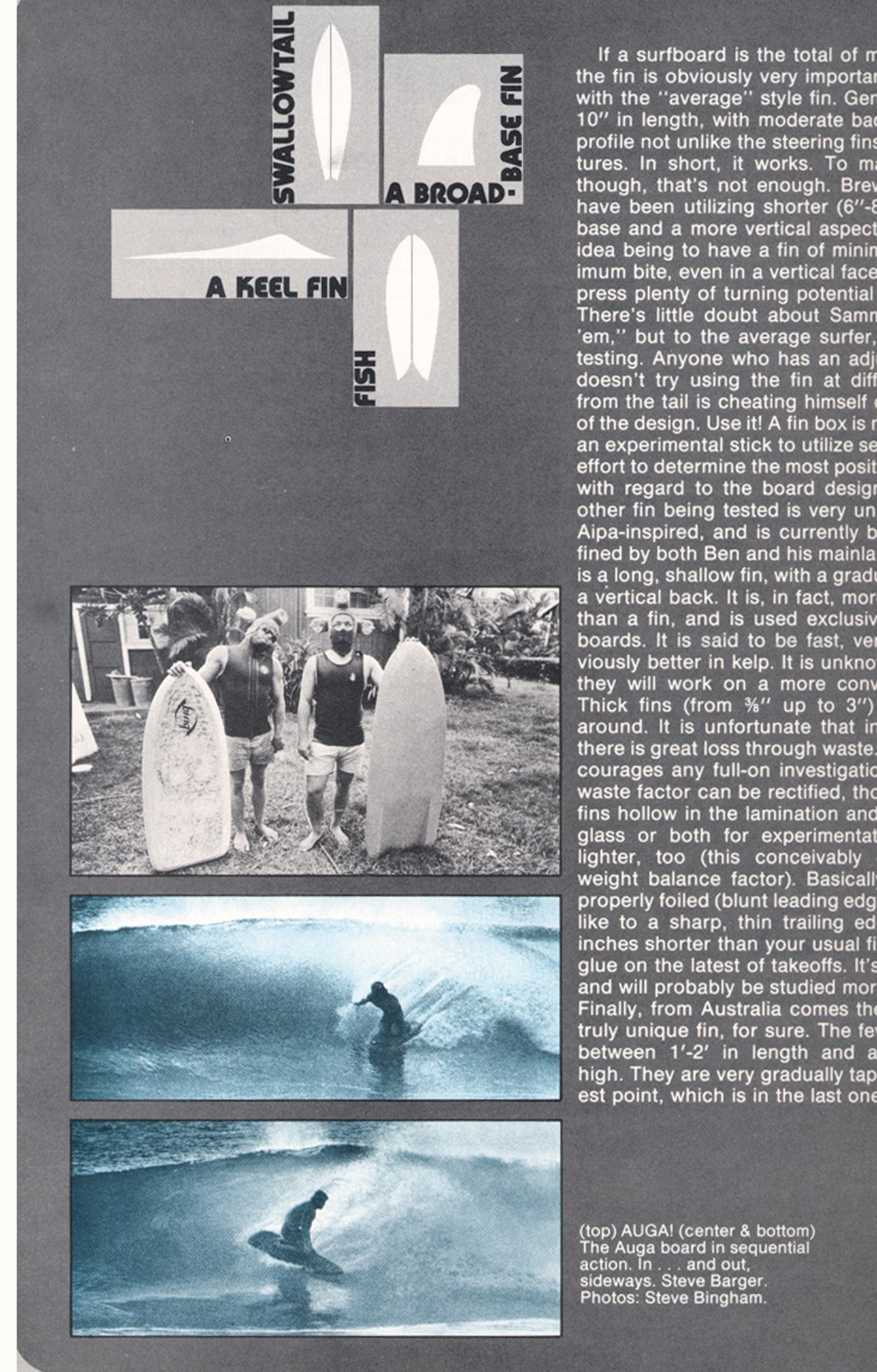 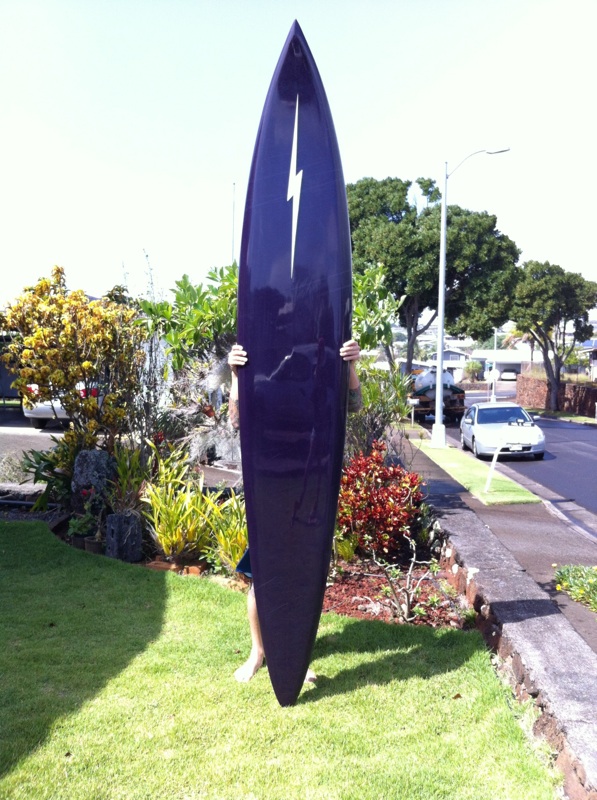 I have restored a couple AUGA! boards and always thought they were ahead of their time.  Actually rode one, that someone had added two small fins to and it made it much more directional, although eliminated the spinners.  Another one of those neat moments in design history.  Here is a pic of a Bolt AUGA!, that Gerry Lopez had his hand in making! 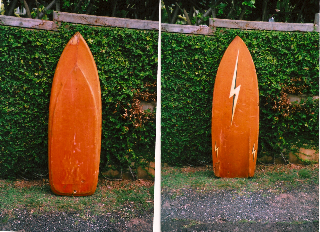 Well this was really interesting. Thx for posting.

Interesting surferjay.  What are you doing the research for?

Mike Daniels made something similar: