I got a new hip in January. I had relagated myself to prone riding on body boards, etc. the last few years because I had no pop-up, but I'm considering giving stand-up another go. There is an interesting board on my local FB markeplace, a 10' Ventura. The price is imo a bit high, at $500 for a board that is claimed to be watertight, but has a couple of rough cosmetic issues, one of which is a tail glass repair that I might feel compelled to tackle before even getting it wet. I lack pretty much any information on the Ventura brand. According to my copy of Stoked-n-Board, this brand may have only existed in 1963, That year does seem consistent with the board shape and features: neutral rails, widening outline through the hips (quite "hot-doggy"), glassed-on D fin. Anyone here know anything more about this brand, or possibly specific models of same? Thanks for any info provided. 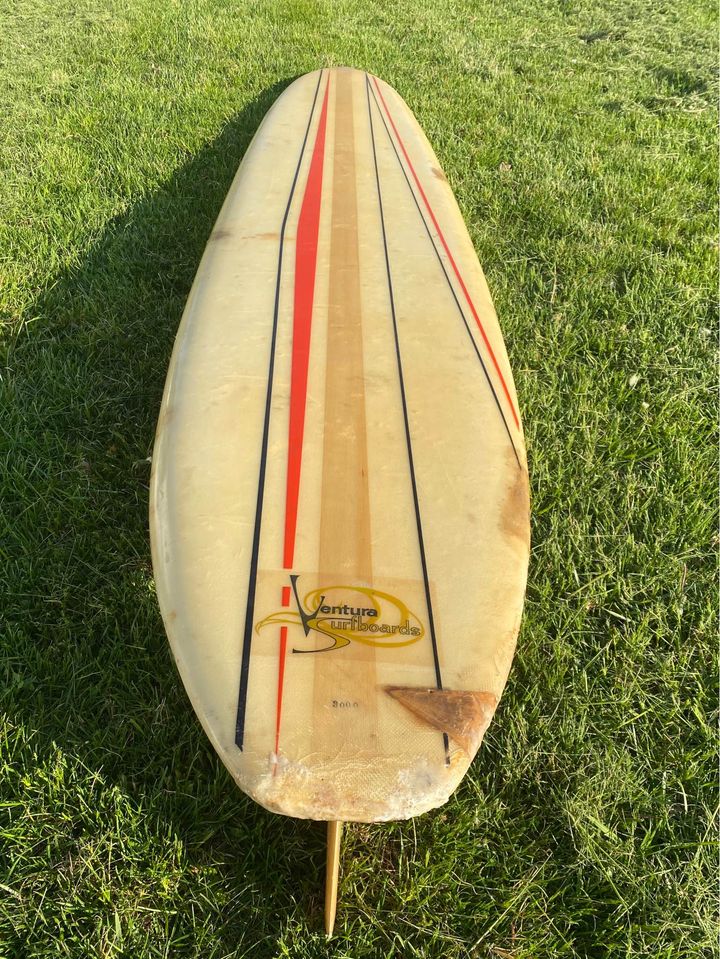 Ohhhhkaaay, a few things-
First, congratulations on the new hip. Gotta love modern medicine. Not that long ago the likes of us would be permanent cripples, no fun at all.

Next- have a look at Ventura Surf Shop (shopvss.com)  for the history of the place. It's a little vague, to be charitable, mentioning the founder, one Tom Hale, was involved with a popout factory before going to his own shop and so on.

Now, there's a stamped serial number on there, three thousand and something . While the board hasn't any of the other blatant hallmarks of a popout that I can see from a couple of pictures, that gives me pause. It's an awfully high number for a small one man shop in the 1960s. And that small shop in that era would more likely pencil on a serial number if they bothered to do one at all. Many didn't.

Now, most popouts were made with glass mat and really bad foam that would have turned ugly brown by now due to exposure. But that one has been out of the sun for most of its life.

So, couple things for you to do. First, call up the current Ventura shop and ask about that number. The current owner has been involved with that shop since the 1960s, he should know something. Nothing to lose...

Next, yes, those are really hideous cobby repairs, boat resin and hack work. You want to ask yourself if you really want to deal with those and for that matter, if you want to come back to surfing on a real early 1960s board, more or less a ballistic missle that turns like a container ship. I dunno what you were using when the hip put you ashore but I'll bet it was lighter and turned easier, I wonder if you really want to go old school to that extent, especially with that shiny new hip.

Thanks for the insights. I hadn't yet looked that closely at the s/n - good catch. The term "pop-out" did occur to me when I first looked at it. I learned on 9'6" standard Keoki pop-outs and the like that I rented in the early-mid 60's, and I don't recall any of them having intricate gloss decorations lke this one. Of course, if they made a bunch of these with the same pattern, it wouldn't have been much of an additional investment. I will note that once I got a Keoki turned on a steep wave, the sucker would fly, due to that same rocker deficiency. I may take your suggestion about calling the Ventura Surf Shop owner. Stoked-n-board didn't nail down the relationship between brand and shop, although both entities are recorded therein. Is that kind of long-term continuity of ownership common in California shops? Here on the East Coast, it would be fairly rare. I'm definitely not set on buying this one, especially at the price - it just caught my eye. I'm also considering building a board - I built myself a handful of short boards back in the 1970s, but never tackled a longboard. I'm uncertain I'd want to commit to that much work, especially as I shaped with surforms and sandpaper, not a powered planer, and that was quite time-consuming, even at under 7'. I'm thinking of trying a Tree-to-Sea hollow wooden longboard, but I'd need something to ride while that happens. Starting to ramble here :) Thanks again.

Awrigfht, a few more things- in no particular order. I'm gonna ramble a bit myself.

That's far from an intricate decoration, we're talking about more or less straight lines on top of the hot coat or 'gloss' if it's a popout, mask 'em off, have at it with a brush and some pigmented hot coat resin, pull the tape, done. Pretty straightforward. On some boards, notably the rental boards we had back when, there were similar big stripes, blue for a 9'6" and red for a 9'8". Made it easy sending out rentals in 1968 or so.

If you saw this on a marketplace ad on the East Coast, well, that's an attic board, somebody bought it back when, surfed it a few times and dinged it a few more times, somebody hacked some repairs and it wound up in an attic for the next fifty years. Explains why the foam is white and, say, the foam beside the presumably balsa stringer isn't coffee brown from seawater wicking its way along the wood as the vast majority of these wound up. Surprising number of those attic specials, actually, guys bought them that last summer before they got drafted and since then, high and dry someplace.Once saw an Abercrombie and Fitch surfboard, of all things. It had been in a garage loft and the place got sold or inherited and it came on the market pretty much unused.

But as far as I can see, it is either a pop out or effectively the same shape. Ballistic missle, unguided. Bowling for swimmers. Put a leash on it somehow and you wind up with one leg a lot longer than the other. It has a logo ( big decal) that appears the same as the current and long standing Ventura Surf Shop logo, so I figure it came from there. And if anybody would know about it, they would. And in all honesty, they might want it for their museum wall, arguably the best fate for it.

I have never heard of 'stoked-n'board' and from the sounds of it, if they can't make a connection that simple then I'd kinda wonder how good they are. I mean, I was able to find this out with one easy search, 'Ventura Surf Shop' and 'Ventura Surfboards', logo just about identical, we are not talking Sherlock Holmes here.

West coast surf shop continuity- I have no idea. I'm an East Coast guy and no historian, place I worked had the same owner since 1967. Hell, they had me as an employee for something like forty years. But the surf biz is kinda ephemeral. Like, say, restaurants, some owners get the fundamentals and stick around a good long while, some are starry eyed and fold after a year or two or get sold or whatever.. Surfboard makers the same way.

But- some other stuff-

Look, you're getting back into it after time away, not 100% sure of where you're at, don't make things more difficult by taking on an old board with questionable function or building something from scratch, especially something real heavy like a wood board or this archaic thing you saw in the ad. Don't make things difficult. It's supposed to be fun after all.

Instead, do your rehab, it's really important. Get yourself a good, used, long-ish fun shape, not too big to turn easy or too short to use on a crap day and not too hard to carry or paddle, something with a leash, removable fin and so on. A real heavy board, for instance, you will be putting a lot of strain in that shiny new hip or setting yourself up for a matching new hip on the other side.Probably don't want that, right?

Again, do the hip rehab, and with your new-to-you board, add to that, paddle around the local pond a lot. Get into shape. Take one of your body boards out in the back yard with nobody watching and work on going from prone to your feet in one move, fast, you got really rusty, and you don't want to be doing the one knee, one knee one foot thing and eating it a lot in the process. In some ways you're starting all over again.You don't want to be floundering or crashing through the lineup any more than you can avoid.

My first thought is Tom Hale. I will check with Blinky. There were some pop outs made here during that era .

Tom Hale was involved with Ventura Plastics.  They made several brands of boards "Ten Toes" comes to mind.  I think they also did "Keoki".  The boards were referred to as "Popouts" because the blanks were popped out of a mold with a layer of Fiberglass mat or cloth on them in the first phase of production.  They were then finished with more cloth and resin, color work and a fin.  They required no real shaping.  Rough cleanup before final glass only.  Dennis Ryder who shaped for Morey Pope and grew up in Ventura has done some extensive writing on early surfing and surf industry in Ventura.  Don't remember where I found it.  Maybe his website or blog.  Too bad Tom Hale has never come forward with a little history for us.  He would be a great source.  Lowel

He was a family friend.i was about 5 or 6 when I went with my dad to Toms shed which is where Patagonia now is.i was awestruck by all the globs off different colored resin drips on the floor of glassing area.

PS --  If I wanted a board to ride, it wouldn't be that one.  The repairs are ugly because when the repair was done the foam was exposed.  Without the layer of mat, the whole board would be ugly brown.  Without seeing the bottom;  I can tell you that the 2" Balsa stringer is an "inlay" and does not goe thru to the bottom.

Look around the shops down on Thompson.  You should be able to find a decent used longboard for that kind of money.

It's a popout. Made by Ventura International Plastics. They also made Ten Toes, Tiki, Stingray, and the Inland Surfer wakeboard. 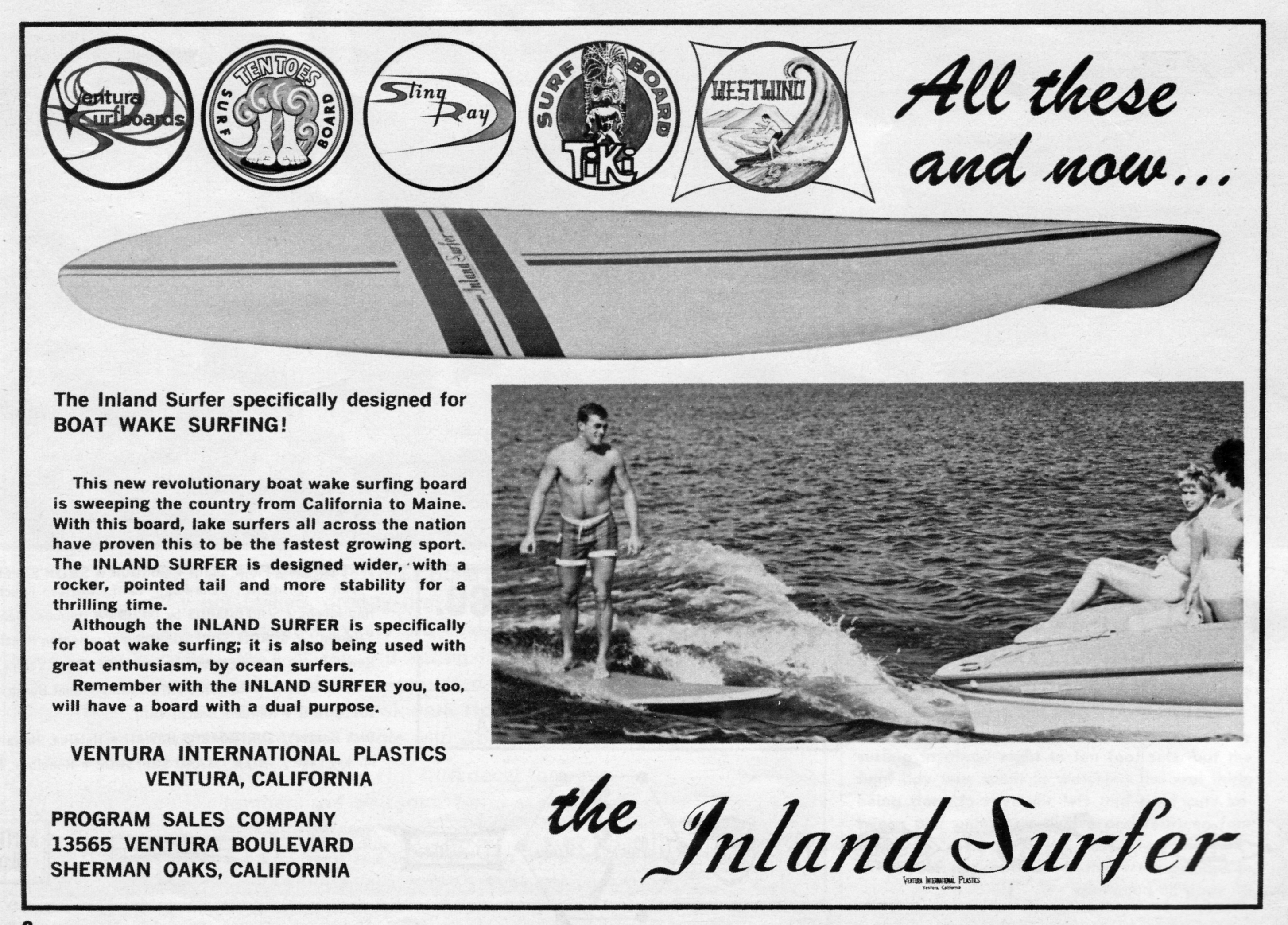