Hello out there, I would like to get one of our local shaper here in Mallorca/Spain to make me a copy of the Takayama Scorpion 2 in 6'4". Does anyone by chance has detailed (i have the rough once, see .jpg) dimensions of this board in paper or digital form? Any help would be very much appreciated and thank you in advance.

You already have the pics and dimensions on the internet.  Your shaper should be able to get to a fairly reasonable approximation of the shape off of that.   It's maybe a 10-minute design exercise on one of the CAD programs.

If you want a more accurate "copy" then my advice is to just buy the real thing.   Really, unless your shaper is modifying the design with their own touches there's no reason not to spend the extra $100 to get the real thing.

Here's why:   Shapers know what they do.   In terms of handshapes, that means a 'copy' by some other shaper is seldom going to be exactly the same as the original that it's designer was actually doing over and over.   It's especially an issue when the shaper has specialized in a completely different board type, like if they normally only shape performance shortboards or traditional singlefin longboards.   Even when they're out of their comfort zone many shapers will add in their own interpretations based off of what they normally shape and for the conditions and the surfing style they are working towards.

It can easily come down to the shaper trying to do something different than what you're trying to do.  I've seen that happen many times.

To clarify, if I was going to have someone else do a custom for me I'd pick a shaper that's already doing the same or similar to what I'm trying to get.  I wouldn't patronize any one shaper to attempt to cover every different type of board in my quiver.

Depend how he work but with, what you have here a hand shaper can make an inspired scorpion board easily, ie same outline same kind of rocker and bottom. What ll change would probably be rails, each hand shaper have his one rails flow in hand and eyes, hard to modify this...on scorpion rails are "Takayama style" : thin round pinchy all the way through the board with tucked under on the back. Personally still not be able to do them like right.

Check out the thread here under General Discussion titled "Concept of a Short Nose Rider".  Full of insight and theory.  My self personally and I have said it before;  The idea of a six foot nose rider is reediculous.  An oxy-moron. One foot on the tail, one foot on the nose.  You can't walk the nose because there is no nose to walk.  I think this type of board was invented for all those Island Style 808 Surf School students.  You know;  The ones from Oklahoma.  The ones who are taught to "Pop Up!!" with the lead arm extended and their other arm bent vertically at the elbow.  You know??  The "Tea Pot" hand and arm pose?  With the rear foot parallel to the stringer and pointed at the tail.  Front foot parallel to the stringer and pointed at the nose.  Both legs spread and bowed like a cowboy who just got out of the saddle after a week out where the Buffalo roam.  I think they came up with this design so students could ride the nose and the tail at the same time.   "Jerseys and booties in the tub please".

I always thought the Scorpion was aimed at the O'side Pier surf schools.   The whole point of a shortboard disguised as a HPLB always escaped me.   I thought his Magic Slipper in a 2+1 was a better solution to the HPLB rider who wanted to ride more agressively.

(aka the Howard Special) 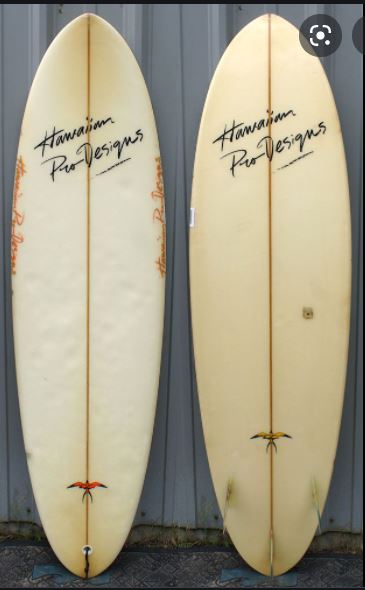 Hi guys and thank you very much for the advices. I will give the shaper this input, to stay as much as he can to the original...some personal touch from the shaper is ok.

- I would buy the real one, if I could get one here.

To get it as close to real Takayama Scorpion 2 as I can, I would like to gather as much detailed information as I can.

So, I am asking again, if any member of Swaylock's does have those information in paper or digital. It can not be possible that never ever someone from this forum copied ons :-))

- I would buy the real one, if I could get one here.

There are three places in France that carry Takayamas. Can't order one from them?

Lowel, They must be popular as they are made in all fashions. Standard Glass & Foam, Surftech/Tufflite and a soft top version.. I think the Scorpion 2 is a little more usable for the average surfer than the original.

There are three places in France that carry Takayamas. Can't order one from them?

yep, for around 1550€ plus shipping....Thats a little too much for me, I'll prefer to support a local shaper for this money

Yeah they must surf and I admit I have been a little harsh about them.  I just disagree with the reference of "Noserider".  There's no plank to walk. It's just a case of releasing the back foot  and or taking a step forward.

I repaired two surf tech and do a replica. Look at my previous post, you have all info you need. Bottom spoon front turning to vee. Dome deck with thin egg rounded rails. As I said Takayama rail shape style is a bit specific.

Save this image to your computer, print (actual size, no scaling), measure and give to your shaper.

[First images I uploaded in this post were incorrect.  Current images are correct.] 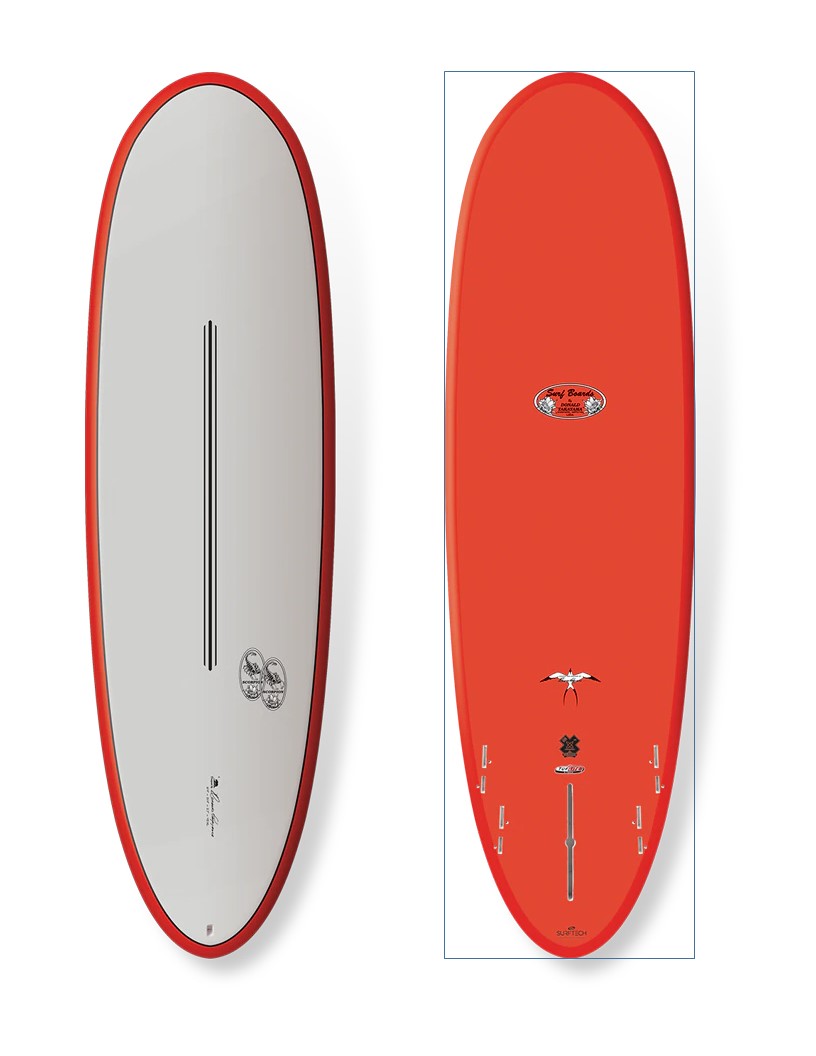 Attached as a PDF are the previous images that included fin postion.  Should be easier to download and print.

I criticize boards of this type primarily because they are not actually noseriders;   but I admit that back around 2001 I shaped something pretty similar.  I took a 10'0 template off an early Hansen Doyle model and shrunk it to seven ft.  I set it up with a single fin and side bites.  The guy that bought it raved about it.  Wish Donald T was still with us.  He was a great guy.

Yeah but the difference is that a 7-0 length gives you enough rail line (and less curve) to give you some drive when you're not actively pumping the cluster.

You can see that's one refinement they added to the Scorp II, they widened the tail in order to straight the curve a bit more.   Still not enough for the shorter lenghts, tho (IMO).   But add a little more length and that changes everything.