My dad was telling me about this colored fiberglass from back in the day called "colorflo". Just curious if anyone on here has any info on it, stories, etc.

Colorflo cloth was indeed cloth with one of a few colors 'built in', fine weave, if I remember right the lamination was pretty much opaque. You could do a cut lap, say a yellow deck and red botttom and rails, and it would look good, no dark areas or odd colored where it lapped.

Though the color really wasn't in the cloth, any more than you can dye fiberglass strands/fibers with food coloring.  Instead, they took a method used for making colored fiberglass curtains, which was to coat the fibers with either a wax or grease or sizing or something like Volan treatment that would take up the dye and there you'd be.

Now, I don't know if the colors were consistent across different lots of the stuff. I don't know if they ever made up enough of it during their short time in the sun for that to be an issue. A mile or so of red, a mile or so of blue, likewise yellow, and that may have been all they ever made. Firing up a factory to make cloth isn't exactly a cottage industry, you can't really do small runs..

I seem to recall that the width it came in was a bit odd too, an artifact of what would go through the machinery.The fine weave plus whatever goo they ued to make the dye work didn't make laminating any easier. They sold repair kits, with patches of various Colorflo cloth in there, we found a few years later. Hell, there's probably a few rolls of the stuff still in somebody's back room, geting dusty.

A Colorflo ad from around 1972 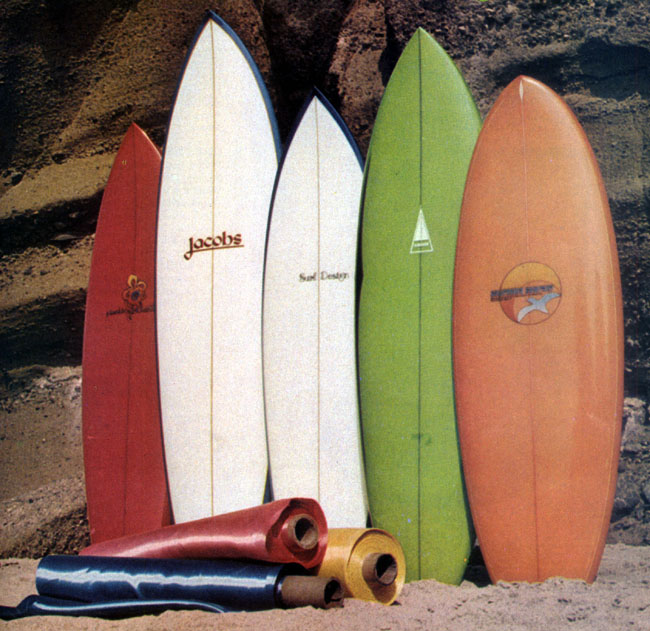 Lots of info on Colorflo in this Jacobs post. More pics, too. See the second page.

Yep, I had around 6 or 7 full rolls of various colors. I think it was someone from the SF bay area that bought the whole lot. Problem with that cloth was if you just snackled your board you could not sand and put a little styrene to clear the snackle to get the color back, then coating with resin. It had other issues. Guess thats why it is no longer manufactured. I never saw anybody ever use it for fin panels either. I think the rolls I had came from Mike Collins who owned Shoreline Glassing in the old Greg Noll factory, Hermosa Beach. Mike worked at Bay City Glassing and he may have gotten them there.