Bought a 7'6" Morey-Doyle closed cell foam surfboard in January 1981 after my quiver burned in a 1980 house fire.  Got it to ride my crowded breaks.

Most fun board I ever owned.

Another innovator has departed.

I'll remember him as a creative and innovative designer.     Condolences to family and friends.

Meyerhoffer should send flowers and a royalty check.

Of all the famous "surfer" types I've known over the years, Tom Morey might be my favorite. He was so much more than the creator of the Boogie but that of course is what he's best known for. I tell folks Tom Morey put a smile on more faces than Hugh Hefner.   Deepest Condolences to Marchia and the family.

RIP Spaceman. I will miss you. 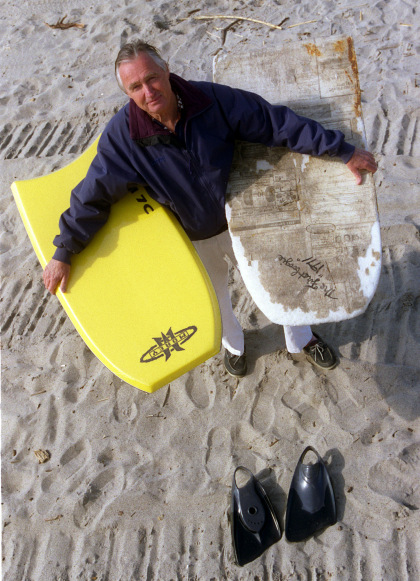 My second board was a used "Snub".  It had two 1/4" Cedar stringers at center set 6 inches apart and a "Slip Checked " nose.  Wave Set Poly fin.    Overnight my surfing improved %100.  Also in that period I rode a Penetrator, Blue Machine, Eliminator etc.  Primarily at places like C-Street, Stables, Cliff House, Oil Piers, Tanks and Stanley's.  I hung around the shop on Front Street on the weekends after surf.  Dale (Arnson) Herd was working the counter around that time.  He was kind to a rotating group of Valley kooks and Grems that hitched rides every weekend in that '57 Torquoise Bel Air.   Occasionally saw Tom Morey and Karl Pope.  We were in awe of the occasional Bob Cooper sighting.  We heard a rumor that is was really some seveteen year old kid name Dennis Ryder that was actually shaping all those Penetrators and not suave John Peck.  I had a nice conversation with Tom at Del Mar Board Room Show a few years ago. He seemed to enjoy talking about that time and era.  He was considered one of the best surfers at Rincon on any given day.  In the the 80's I hung around outside that house at the beach near the OB Pier where Tom and a few others played Jazz once a week. Got to know his son Sol on Maui.  Tom was a good man.  A real thinker.  He will be missed by all.  Lowel

My tom morey ; had the most bitchin  hand gesture to mimic a curling wave.

,me and gordon guptill , went camping at carpenteria

state campground with harry beer and his wife and kids.

we drove to the ventura shop where tom invited us

to go surf at stanleys for the evening glassoff...

me and gordon had yater spoon era boards...

when tim quance stopped in to ask morey

to sponsor him because tim was in love with

he only had only one rider ,ross cave.

Quance was crushed.we went on to newport and

tim got on the ramsey jay team.

getting out of the water at kalapaki at sand bar ,there was tom doing a

later that afternoon he showed up at the kojima house

and spent the afternoon and evening with his entourage ,jolly and the girls...

and initiates his relationship to kauai growth ,

and importing his favorite chefs,jose and evo

and buying them a 58 midnight blue Chevy Impala lowrider

he rented me the old location for h.waldron feedstore to make my

episodic appearances of tom checking in

over the years , including this year ,

sustained the template alternative to

the other father influences I have taken to heart

throughout my life.Asembling the ''What is life on earh?'''

who am I really? what do I do next?What's to become of this

whole live thing? has been filled in  by the Tom morey association,

.I will do my best

to carry on the story.

I/we owe it to the continueum

may eternity provide you comfort and grace.

I will think and tell the story of Tom Morey

for the rest of my life.

A true innovator to our sport/lifestyle.  He is responsible for putting more people into the surf than anyone on the planet.  I've owned several Morey/Pope boards and all were exceptional.
Tom, thanks for all the fun. R.I.P.