Not sure if I need 10". Let me think through this here:
The base length of a thruster fin is only about 4.5" with the tab.
Rear fin trail edge is usually placed 3.5" from tail end
This board is 7'0" length and i want it turning faster, not more drive
Moving it further back would yield more drive so start at 3.5"
Moving it further up loosens it up which I do want
The rear fin I have, with rake, length measures 6.5" from front of tab to trail edge, and this equates to approx 3.5" of extra space in a 10" box or 1.5" in a 8" box
Moving it 3.5" forward pushes it really far into the side fin area. From my experience, even 1/4" moves make a big difference, so this seems excessive
Maybe an 8" makes more sense
OR maybe I'm overthinking, trying to re-invent the wheel...and should scrap this idea and stick to the tried and true numbers

Bahne, Fins Unlimited, Futures, even the Chinook boxes (+ others?) that take the standard removable fins are all pretty much the same as far as fins and adjustments that they accept.  That to me is the beauty of them... over a remarkable span of time, that fin type has remained a standard and they all seem to fit any of those boxes. Sure, they might have slightly different installation procedures, especially the flanged Futures, but...

Another trick on the forward screw tab varieties is to cut away the back of the insert tab so the fin can slide past the back of the box.  This can put a small fin in more of a thruster position when the box is installed too far forward.

What are the origins of the Wilderness board?  Bob Duncan or Cundith?  --- Duncan, SB

Got any other pics of it? --- Not sure. I think I have some somewhere.The board doesn't look so nice any more but it's been... places.

Only way to know for sure is to just do it and test it. I prefer all boxes because you can swap out all the fins. I usually start with a long center fin box 3.5" - 4" from the tail. I try to be able to have a board that can be a thruster, single, or a single with small sidebites. My latest craze is twins, so now I'm trying large side fins and tiny center as an option for twins.
This is an old Bushman fish. Bushman made it with glassed on side fins and a matching center Bahne box fin. I've only ridden it with all 3 fins. I recently repaired all the dings and made this tiny fin with 3/8" G10 and stuck it in for a photo, but I haven't tried the board like this yet.
I move center fins much more than 1/8", depends on what setup I want. Back in the days of glassed on singles we learned to turn quicker or make sharper turns, you step back and get right over the fin. For more drawn out turns, you stay forward. Adjustments were made to your stance to get the board to do what you want. Today people do the opposite, they stand in one spot and change the board to fit their stance, but if you don't learn to feel where the sweet spot is, it won't matter. 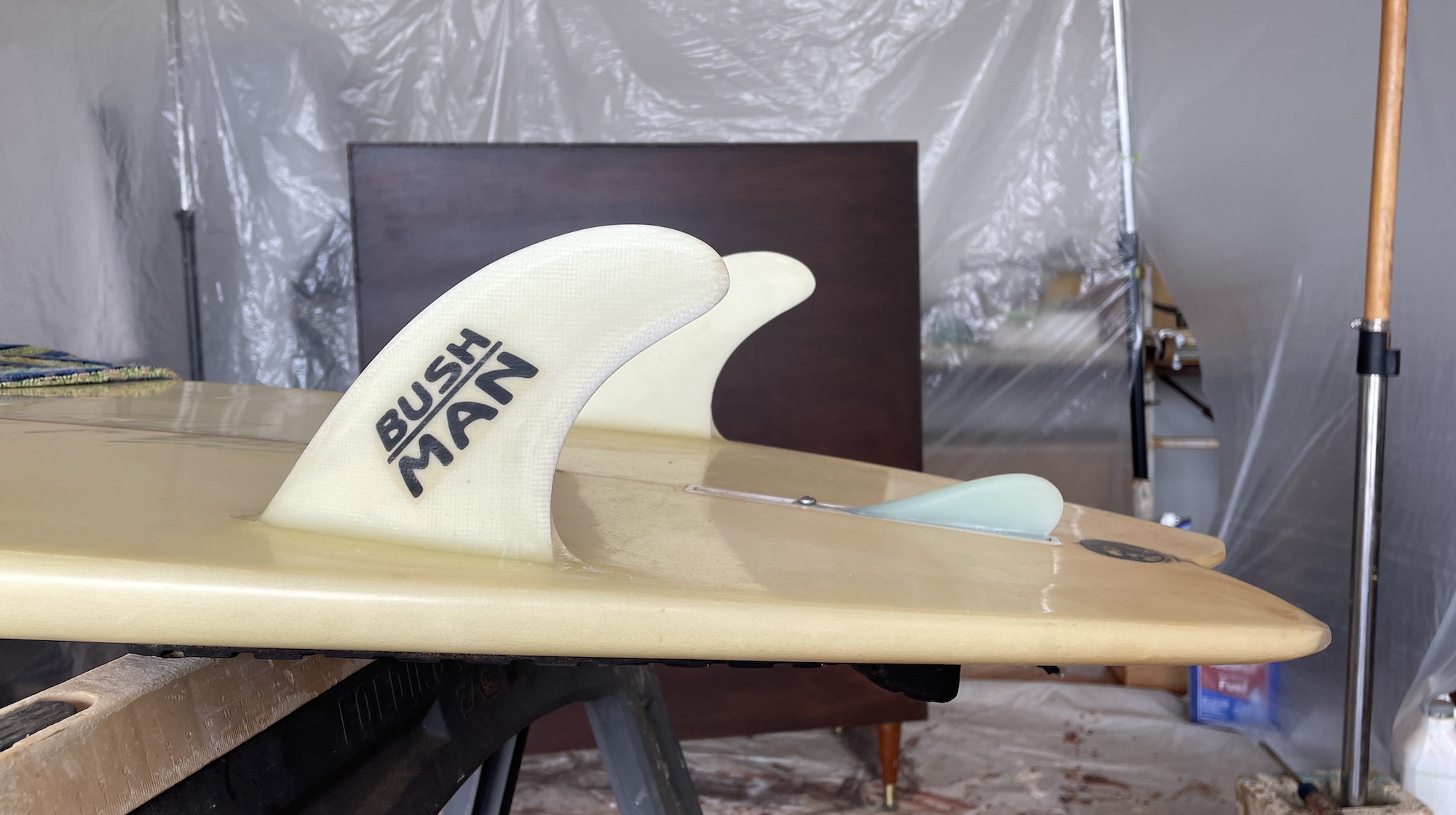 I've got a double wing round pin with a bahne box in center, and made a bunch of different size center fins for it.

Location with a round pin is a bit different,, perhaps as front footed surfers tend to favor them,  and I  had positioned the bahne box for use as a tab forward single fin, and the thruster fins I made to overhang the end of the box.

I found this board with a full sized thruster fin in normal chest high + waves was a bit stiff and slow, and moving the fin forward loosened  and quickened it up, and then from there I reduced the size of that center fin until it was feeling a bit squirrely in the juicy stuff, and then moving that smaller fin backwards just felt wrong so I went back to what felt better.

I did have a  18 month long 7.5 to 8.5" single fin phase with this same board after refining it as a 3 fin, as I wanted it to feel, with all sorts of different style/ size side fins, but when I went back to thruster with a smaller center fin pushed a bit further forward than 'normal', everything clicked again.

A lot of adjustability can also be a curse, but if I did not have the ability to move that center fin forward and reduce its size, this particular board would never have clicked, and I would have had a lot less fun.

I was rather surprised at that time,  when I figured out my favorite configuration in the chest to slightly overhead zone, that it also worked so well when it got larger and juicier.

It did not look quite right  with the smaller center fin as far forward as it evolved.  The cluster looks too close compared to what we are used to seeing.

It looked as if I needed more center fin, pushed further back, but it certainly did not feel that way.

All the original fins I made to overhang the end of the box, basically were never used overhanging the end of the box with trailing edge at the standard 3.25 to 3.5",  not more than once. I think I settled into the 5.25 to 5.5" from end of round pin with a 65% of normal size center.

Dont be afraid to try what looks wrong.  We've all been conditioned to favor what looks right, and that is largely subjective opinion, combined with fear of ridicule, whether we admit it or not.

hey thanks for taking the time to say all this. its encouraging. i'll be sure to incorporate it into my next build!

The real beauty of this post (#16) is that you had the options, explored them fully, and came up an understanding of what worked for you in a variety of conditions.  Perfecto!