There is much wisdom, in the above post.     Read it twice per day, for three days, so that it sinks in.

Let's all keep in mind the OP is surfing in Normandy, "where the waves are mostly mushy, often smaller than 2ft".

Hi friends! Quick update: I finished the board, thanks to all your replies and also other posts I saw on swaylocks. Due to different limitiations I ended with a 7 x22x 3 1/8 blending curve retro D template with quite thick rails, and little vee in the nose (to cut through chop) to almost flat to subtle vee. I went for a Greenough 4a 8.5' fin.

I tested the board for the first time today! I had loads of fun, and I love it even though I can feel that it's far from perfect. It's flowy and connects through turns if that makes sense. However I was quite surprised to realize that even though it paddles like a longboard, you really have to be in the critical section of the wave in order to catch it. It's also a bit slow. I'm wondering why that is. Could it be the rocker? But then wouldn't the paddling be also hard? Could it be the thick tail/rails? Also would the position of the fin in the box influence the overall speed? Thanks again for all your knowledge! 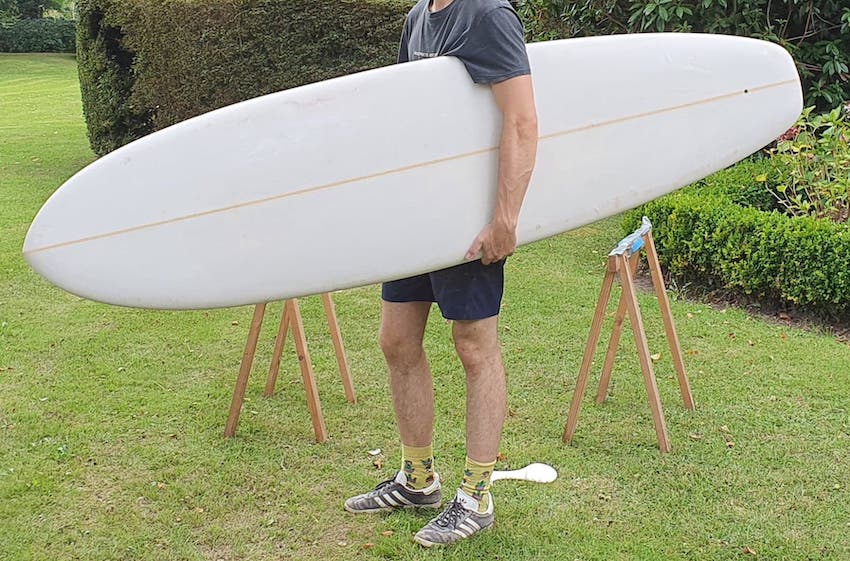 There's nothing bad about your design, but if you go back and re-read, we DID tell you from the outset that a 7ft length wouldn't surf small/mushy as well as a longboard.  The 7ft length is better suited for other conditions, including conditions where a longboard won't be as easy to surf.

A 9ft board has a 2ft longer rail line and that much more wetted surface area so of course it's going to be much more forgiving on your margin of error insofar as syncing your board speed with the wave speed.   A 2ft longer rail line has that much more rail engaged in the face of the wave, which that rail line is your engine.   Unlike with a thruster, you're not generating the energy with pumping a fin cluster, but are allowing the rail line to generate that energy - the board is doing more of the work.

A 7ft singlefin is going to surf like a 7ft singlefin; you can set a rail and run down the line but the design is really more about surfing the wave a bit more actively.  Making more turns and using more of the face, which you will have in slightly larger and faster conditions but which you don't have in really small/weak conditions.

There's nothing wrong with your rocker.  That board will almost certainly make any drop you're capable of taking.

Next time hit us up before you take the board to the glasser and we'll point you in the right direction with the rails and the foil.   But in the meantime you should enjoy this board for what it is and work at figuring out it's strengths.   Most new-to-you designs will have something to teach you that will translate into how you surf your other boards.   Build-your-own is as much about testing out new different way to surf the wave as it is about improving your shaping and glassing skills.

Thank you for your reply! English is not my native language so maybe I was unclear: of course a 7 feet board won't catch every tiny ripple wave like a longboard. However I've surfed a 5'10 groveler which I feel has a better wave catching ability than this one. I'm wondering why that is, and it is the point of my previous post :)

I've surfed it again today and I really liked it. Still figuring out the right fin positionning though. By the way I glassed it myself! hence the sloppy glass job lol. I'm starting to see some checkerboard patterns on the deck under the gloss coat, should I be worried? I'm quite sure it's not burn-throughs that happened during the sanding

Good for you for doing your own glassing.

As I've been saying, I think you should just surf this board and not worry about any imperfections.  Everyone has to start from the beginning in this process, so just enoy that process for what it is.   The next one will turn out better and in 10 boards you'll have a lot more confidence.

One reason your 5-10 may have moved better may have been if it was a thruster or a quad and you were able to use the cluster.   Most singlefin designs move faster if you just let them run.    With those you're looking for smoothness and glide, not thrust.    With singlefins you need to do a proper bottom turn and look ahead to plan your turns; you're not creating your drive, you're extracting it out of the wave for all it's got.      It's a different approach to rufing.

My guess on your speed issue is lack of lift. (the bottom rocker looks pretty flat and, funilly, flat is not always fastest, but let's leave that aside)

It's normal for first shapes to have soft undertuck and softer tail edges.

You can try to build up a resin edge from 2' off nose to tail and see if it helps.

But then again, it could be there's not enough power in the wave.

Thank you for your replies! I tried it again and as gdaddy said the bottom turn really sets the wole wave. I'm intrigued, why would a flatter rocker be slower? I might try to build a resin edge, on the tail it's not really sharp at the moment.

You can play around with Bondo or other form of bodyfiller that they use on the body work for cars/trucks.   It's a temporary fix that you can add or adjust or remove in order to see what the different contours are doing to the ride.   It's less of a commitment than adding a resin edge.