A liddle nugget of a question

"Geoff was the one to narrow the nose and widen the tail."

Weren't the Malibu "Pig" boards of the early 60's built with wide point back, wide tails and narrow noses? I think Velzy/Jacobs usually take credit for the design.

I had a Weber (not saying he came up with the design) with the wide point back literally 2 feet from center and a noticeably more narrow nose than tail. Watch old films of the "Little Man on Wheels" and you can see how easily that kind of board would cut back even with the square skeg.

Another popular design (around Malibu area) in the early 70's was the "reverse tear drop" - basically a shortened version of the Malibu pig. I'm not sure when Kirk Putnam had his Liddle but the RTD designs I remember were ridden by the stub/hull guys. They were all ridden as single flex fins.

I haven't forgotten my roots as just another poorly evolved valley kook, but I still devour all the info I can on board design.

John, All innovations/changes comes in waves or cycles. I think the idea is that McCoy helped to change shortboardboard design with his wide tails, wide points behind center, and needle noses. Simon Anderson has mentioned McCoy as an influence on the Thruster. Before then "most" wide points were at or ahead of center. As with Simon, it helps to have one of the best surfers riding your innovations.

John,
You are absolutley correct about Velzy/jacobs. My reference was to modern shortboards. Those old velzys were a trip. I doubt Geoff himself would take credit to being the first in any particular design, but his original no nose single fin is plan shape is what became the modern thruster and he has been one of the most copied surfboard makers of the last 30 years. Even Simon Anderson and Mark Richards give him credit for his influence. It did not hurt that during his first heyday surfing was going through huge changes and experimentation. The late seventies and early eighties was a good time for board designs.

I was in no way suggesting you did not know your history or cutting on your own take and knowledge of surfing. Sorry if you got that impression.

We have an interesting sport/art

Solo - Uh oh...I didn't mean it to come across defensive. I hadn't posted up until then and it was meant only as a point of reference. Same with the "roots" comment. Design progression and refinement continues...

The twenty inch tails were for Cheyne Horan not the average Joe Surf. Geoff himself is probably the best to answer all the questions about himself, since magazines decided long ago how to label him, with little regard for facts. Some of us watched it from a far and shook our heads. Geoff is in no way responsible for any strange trend in surfboards, he simply created the prototype surfboard that every modern thruster today has in it's past. There have been many contributions, but Geoff was the one to narrow the nose and widen the tail. He also had a hand in the twin fins MR rode.

The nugget seems to me to be an extension of the zap, but not so tail heavy and easier to ride for the average surfer. Since the whole idea is to make something hard look easy, to catch more waves and have more fun; The nugget is a great logical alternative. I don't think Geoff wants so much to challenge whats been going on in surfboard design, but to simply offer an alternative. Thats how I see it anyway. Geoff Mccoy is his own man and the one with the experience. He is the one who can best answer any questions.

The only wierd direction I can remember in surfing is the 90's garbage pushed by Kelly Slater wanna be's. Those things almost ruined surfing if not for such a comeback by longboards and wider zapy looking fishes. That generation seemed to want to make surfing harder instead of easier. Our sport is way to influenced by hype. That is the main problem.

There are other guys like Steve Forstall who has been shaping Eggs, hybrids, and performance longboards for 30 years with little reguard for what anyone else thinks and they keep selling. Same for Skip Frye and others.

I think that the slater type boards of the 90s were invaluble to surfboard design and really helped the overall understanding of rocker since everyone at that time was trying to see how far they could go. Obviously the designs were too extreme to be practical. Too much rocker, too thin too narrow to work for most people but its hard to deny that the rocker revoloution has helped all surfboards become more manouverable and fit into tighter places than ever before.
like
0
Top
Thu, 2004-03-25 01:00
(Reply to #16) #17

J.Troy,
Your are right we did get boards that were manuverable and fit into the wave pocket differently and we definitly learned alot about rocker, but it also created a style of surfing that fewer surfers can enjoy and is not nearly as pretty to watch. I was watching a video of Colin Mcphilips and Joel tudor surfing against each other. Colin Rips on his rockered out performance longboard, but Joel was covering much more wave and looked much better. It was a point break and you could see Colin struggling to keep up with the flatter heavier longboards Joel was riding.

To be honest that all over the wave, on top of it, and pocket surfing was first mastered on the world tour by Cheyne Horan on those twenty in tail models someone mentioned. His boards were not think nor rockered out like the ones in the early 90's. I guess it's all a matter of taste, but I think more surfers have fun on boards that float them properly on top of the water instead of in it. There is just so much talent on the tour and so much pressure to fit in to the status quo those guys make the thin little boards look good. The guys I see in the lineup with the biggest smiles sure are not the pros or the sponsored surfers.

The connection, in my mind, is the tuned round bottom. There is a definite pull or acceleration that occurs on a round or well built v bottom as soon as you put them on a rail that does not happen on any other kind of board. It's all about the bottom not the type or shape of the fin. I was wondering if that also occurs on a nugget.

McCoy has just refined the round bottom board to work with short radius turns, whereas Greg Liddle took it in another direction. Neither better or worse, just different. Personally, I enjoy the feeling of having the board and wave interaction do all the work...very similar to a mat.

talked with Spencer Kellog last night( bumped into him downtown)Anyway, he has been building a couple of nugget inspired boards and really likes them, especially for backside surfing.Anyway, he puts about a 1/2" of hull in the bottom, but the hull is focused under his feet ( which is how Steve K."dirt" likes his as well) rather than in the nose area.I have not ridden a nugget but have tried one of Steve's thta PG made.With the hull under foot, definitley a great turning board compared to the other types, so I understand the cocnept behind the hull placement on the nugget and why people say they turn like they do. 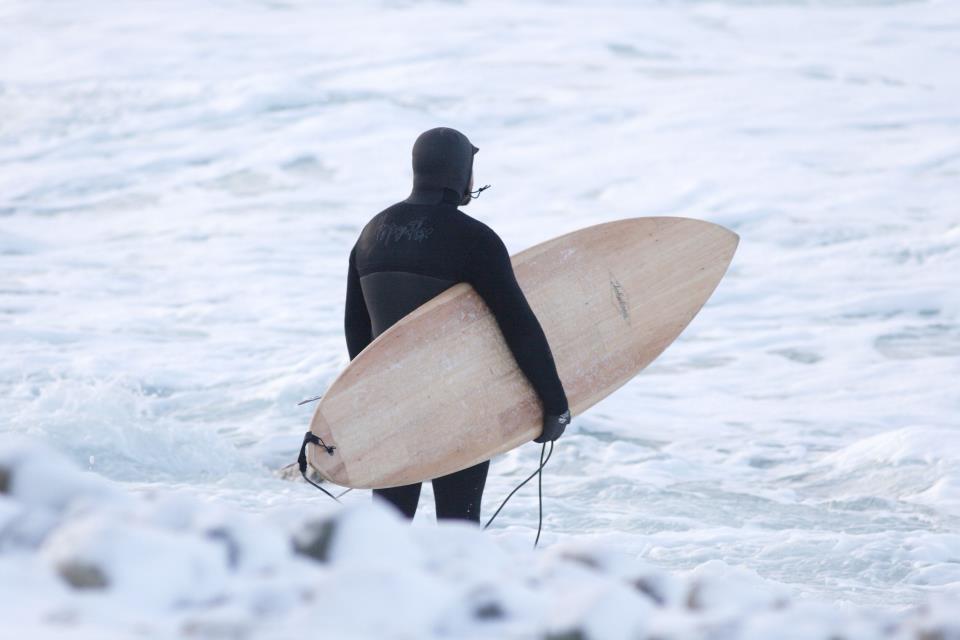 talked with Spencer Kellog last night( bumped into him downtown)Anyway, he has been building a couple of nugget inspired boards and really likes them, especially for backside surfing.Anyway, he puts about a 1/2" of hull in the bottom, but the hull is focused under his feet ...

Is the hull of the McCoys and 'clones' configured similar to the liddle hulls or is it more of a belly hull? From what I understand the Liddle hulls are relatively flat near the stringer with increasing hull depth near the rails, creating a sort of turned up rail. Any helpful info on bottom and rail configuration and rocker of nuggets greatly appreciated.
like
0
Top
Wed, 2004-03-24 22:27
(Reply to #20) #21