I'm still going through the article in the first post line by line, taking detours when I don't understand something.

It appears the performance improvement with tubercles is indeed very pronounced, not just on whale fin shaped objects.

I have some trouble identifying the exact foils mentioned in the article:

My understanding of the nomenclature for the foils is still rudimentary, can anyone who understand it better help out, please?

These two foils don't appear to be in the site's database. I think they're talking about the symetrical NACA 63A021 and 65A021.

Anyway it doesn't matter that much because the profile section of an actual humpback flipper varies so much and is not a really clean, consistant profile, being made of bone and fat. So the NACA references are just approximations. If I copy one of the flipper sections and analyse it, the performance results are going to be very bad.

I would not bother too much with the NACA nomenclature because you will find better, more modern foils for most thicknesses or applications.

Posting below, NACA 63A021 and 65A021 and the flipper they studied to estimate the foils sections

Hydrodynamic design of the humpback flipper, Fish and Battle 1995.PNG

Effects of the tip occur as a consequence of generation of lift when a fully three-dimensional wing is canted at an angle of attack to an incident flow. Induced drag is produced in generation of lift from kinetic energy imparted to the fluid from differences in pressure between the two surfaces of the wing as there is leakage of fluid from high pressure to low pressure around the distal tip of a lifting surface, resulting in spanwise flow and the formation of vortices at the tip (Vogel 1981). The flow pattern set up by the tubercles is considered to maintain a chordwise flow and reduce the induced drag due to tip vortices.

wrcsixeight has used a trailing camera to record footage of fins in action.

I suppose the rarety of visible fin vortices of tubercled fins is due to this.

Perhaps collecting footage of smooth fins in action would show more vortices, but who would want to waste surf session (and building time for the camera attachment) with inferior fin designs?

While writing the above question the answer occurred to me: I might! But I need to somehow get a more competent surfer than myself onto my board with the 'FinEye' camera in it.

Cheyne Horan is the obvious choice, I need to try to get him to do it. The ability to analyse the performance of his own fins in my board should be motivation enough.....and I know he sometimes surfs 8ft McCoy Nuggets.

I took the liberty to redesign the Gullwhale 7 with only the E168 foil. I can send you the file if you want to have a look. The thickness map has artefacts that are not really there, takes time to have a smooth one. If you want me to try anything else let me know.

Would you like to send the file as attachment in Sways or should I pm you an email address?

Thank you so much, WAO!

It will be interesting to compare them both in software and in the surf.

You're welocome ! I'm eager to give back to Sways for all the stoke and inspiration I got from here.

So that the collection is complete, I will model a last one with the method that do neither valleys or depressions behind the peaks. Tomorrow with my morning coffee may be. So we'll have all 3 modeling solutions.

I note there are no flanges at the fin base.

Also, it seems that the Eppler 168 and Eppler 169 files are identical.

But I might be mucking it up in OpenScad, not sure. Maybe I have a stray 'resize' command somewhere.

Can you please check if you uploaded the correct files?

Yes I didn't model the flange, I simply applied the foils to the planshape. What is the flange for, strength ?

The files now works as expected, thanks!

There is an ever so slight difference between the Eppler168 and Eppler169 fins, even when I adjust the thickness to be the same, because the Max Thickness is at 26.7% vs 26.5% chord.

Both of them have a slight concave fore of the trailing edge.

Having looked at this in more detail now, I cannot really say what foil I used for the G-Whale7-FRR. I started with tracing Eppler 168 into finFoil, but then I tried to work out the best thickness after an actual fin was printed, so I measured chord length and max thickness at each tubercle and at each valley. I averaged the results and adjusted the overall thickness of the fin so that it's close to E168 (tubercles) and E169 (valleys) on average across the wingspan. I did not pay any attention to where the thickest part is (meaning at what % of the chord length). The foil is really customised for the particular plan shape.

Unfortunately the WAO - E168 does not work perfectly with my standard UTFB carbon bar system, it is too thin in just one spot, so there is a surface breach when I shift the carbon bar hollows in OpenScad, see attached screenshot. The WAO - E169 fin is thick enough so I would not have to make changes. There will not be a surface breach in the actual printed fin, but too few layers between the hollow and the outer surface cause surface imperfections. Every carbon bar is fine-tuned to within 0.4mm. I think I also adjusted them so that I can make thinner versions without changing the bar system.

The E168 is probably closer to my G-Whale-7SRR (11mm thickest part), so I'll render and print one. I find it difficult to get a good impression just from the computer screen. The differences will be much more obvious when I have a real fin in my paws. 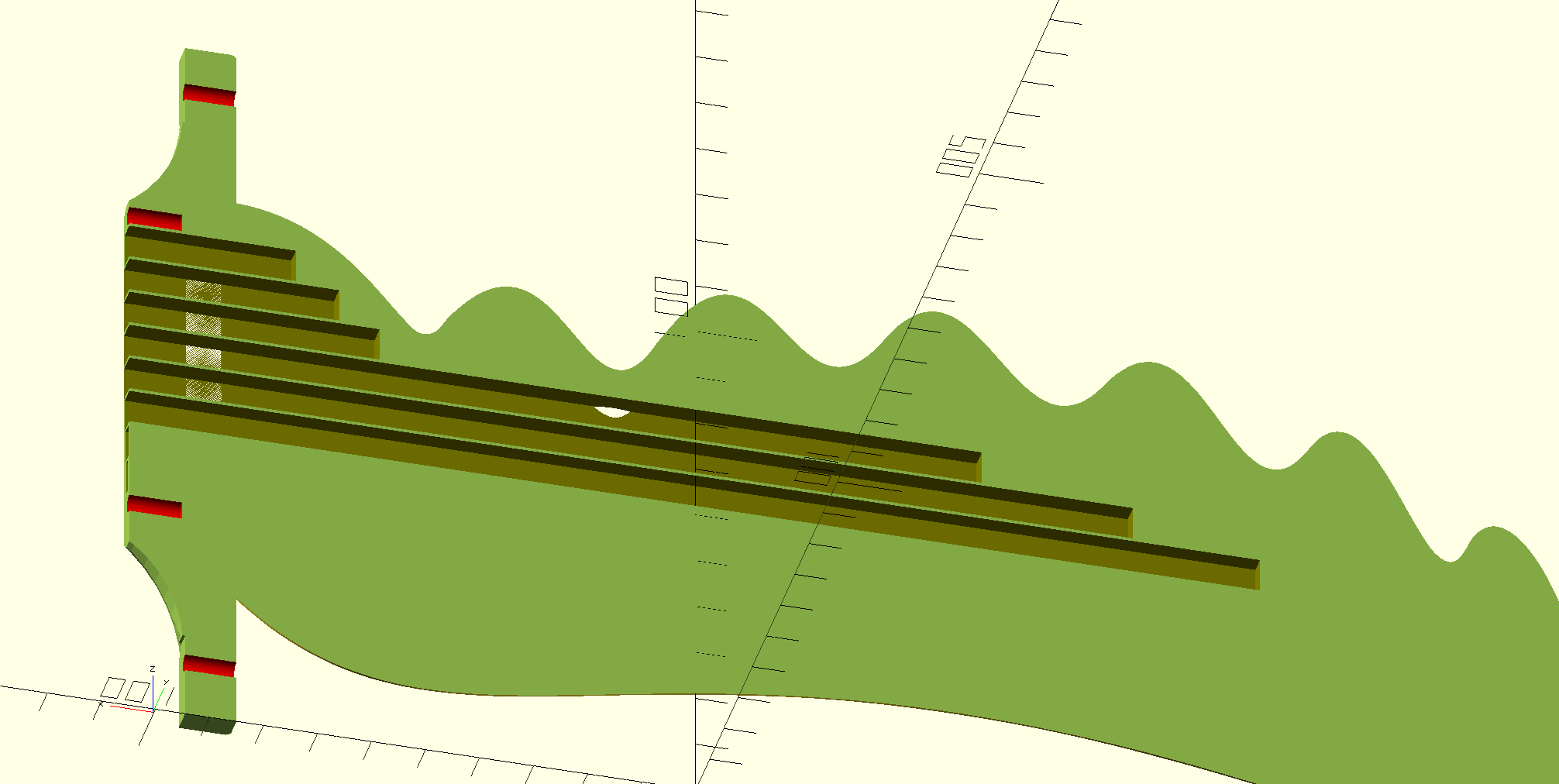