So here's the image I posted earlier.

A twingle set-up of 7" fins, spaced 2" off center, foiled inside, flat outside. Water flow along a plane halfway down the fins, so 3.5"under the board, at 3 m/s and 15 degrees AoA.

Quick note on the colors. The colors represent the velocity, so if you look at the right side of the images you see the unpertubed flow in green (3 m/s). Going to yellow, orange and red the flow is accelerated, going toward light blue and deep blue the flow is slowed. So the red-orange areas represent lift (accelerated flow, less pressure), while deep blue is flow that is almost still or even turning around as you can see in the turbulent stalled region.

I need to process the other images to make them lighter, tomorrow. Mandatory disclaimer, these are fast simulations, they give an approximate idea of what's going on, reality is more complex.

Bonus Image, same situation at 20 degrees AoA. The wake is more turbulent and the pair generates less lift than at 15 degrees but remarkably the flow is still mostly attached on the outside fin.

For comparison here's only one fin (single foiled) in the same conditions as above, 15 then 20 degrees AoA.

At 15 deg the flow is already starting to detach, from pretty close to the leading edge, but the fin is still probably holding.

Reminder, the map is not the territory, I do these to trigger the imagination. Also they are still images of a highly dynamic system, when the flow is turbulent like in the stalled regions, it actually switches between several states. And that is in a virtual water tank with steady flow ! When you add a living wave and the rider's inputs, the whole thing is beyond calculations for the forseable future. Which is good.

I have regrouped so single and twingle of the same angles can be compared.

The 20 degree angle seems to demonstrate a more significant improvement for the lower fin in the twingle.  However at 15 degrees, for the upper twingle fin, flow separation is worse than if the camber is placed externally at 15 degrees.

My first thought on some of this is that the twingle may have a bit of a "wing slat" component to it as much as a biplane effect.

This fin setup makes perfect sense to me. However I'd go for double foiled fins since the inside fin (~ top wing) is responsible for more than half the lift generated. 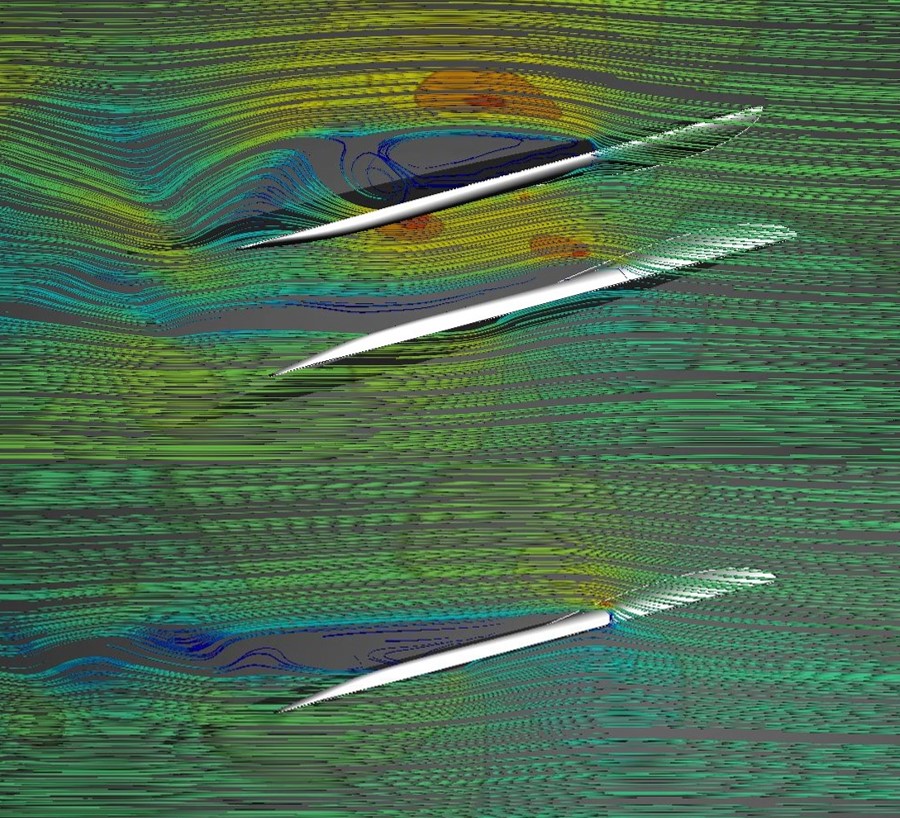 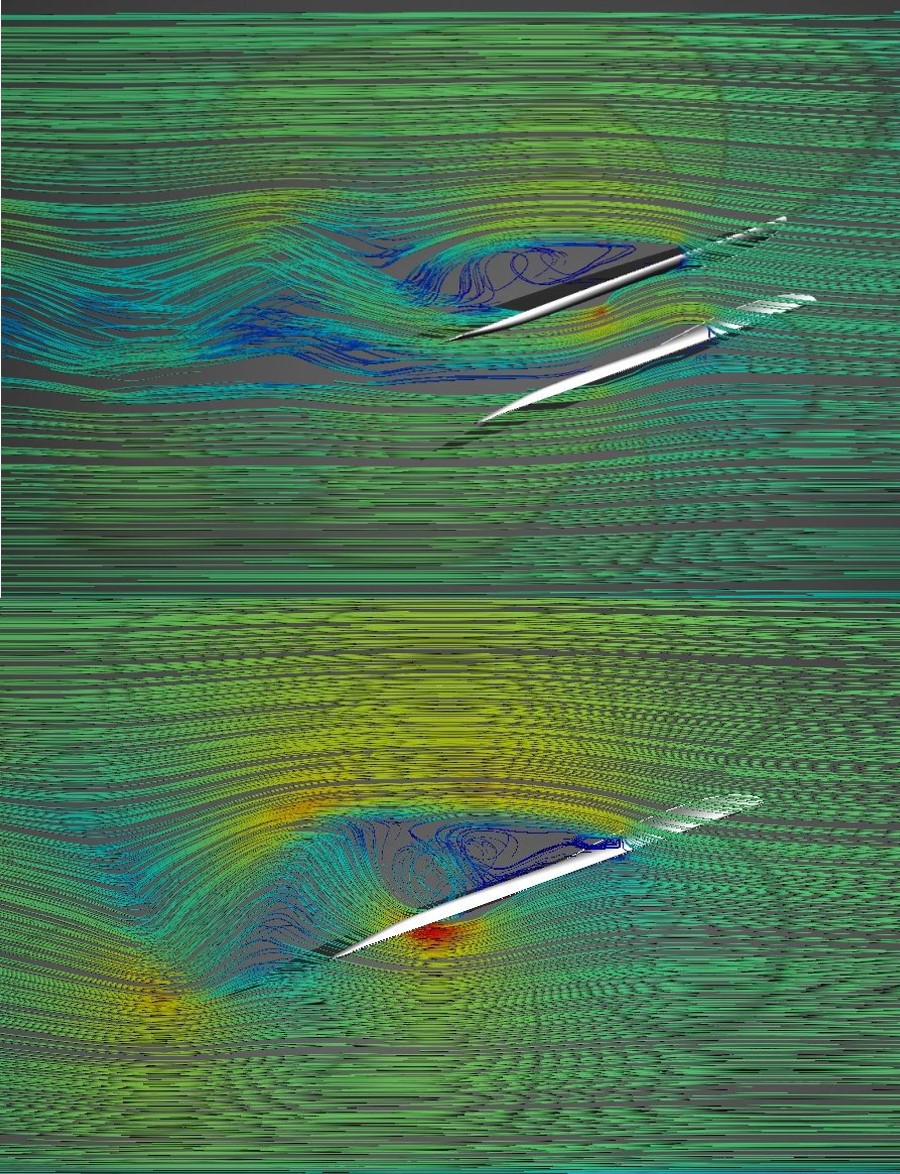 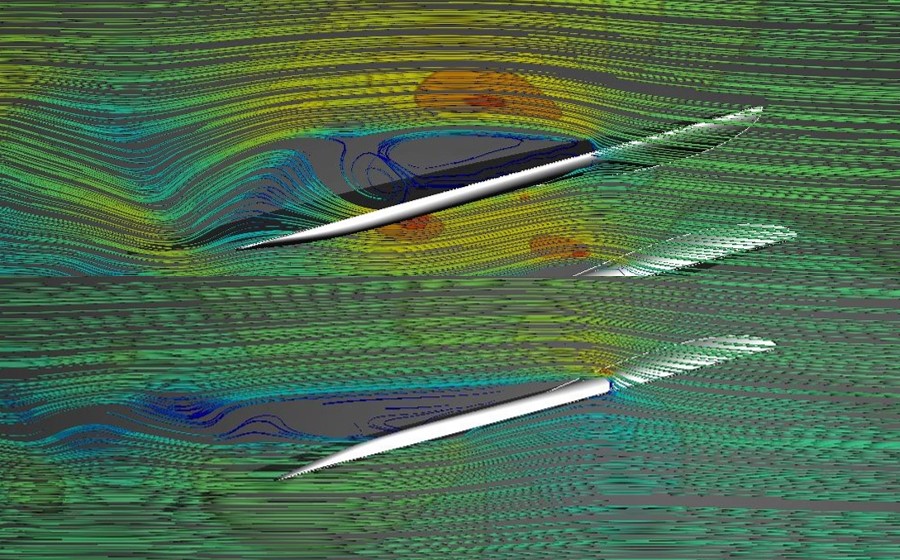 As I mentioned in the last post, to be thorough, a comparative analysis should be done for flow with these twingle configurations. (Twin blue symmetric foils and twin green asymmetric foils [with outside camber].)

Foils are proportionally correct for 3/8" thickness, 6" chord length at base and 2" separation. 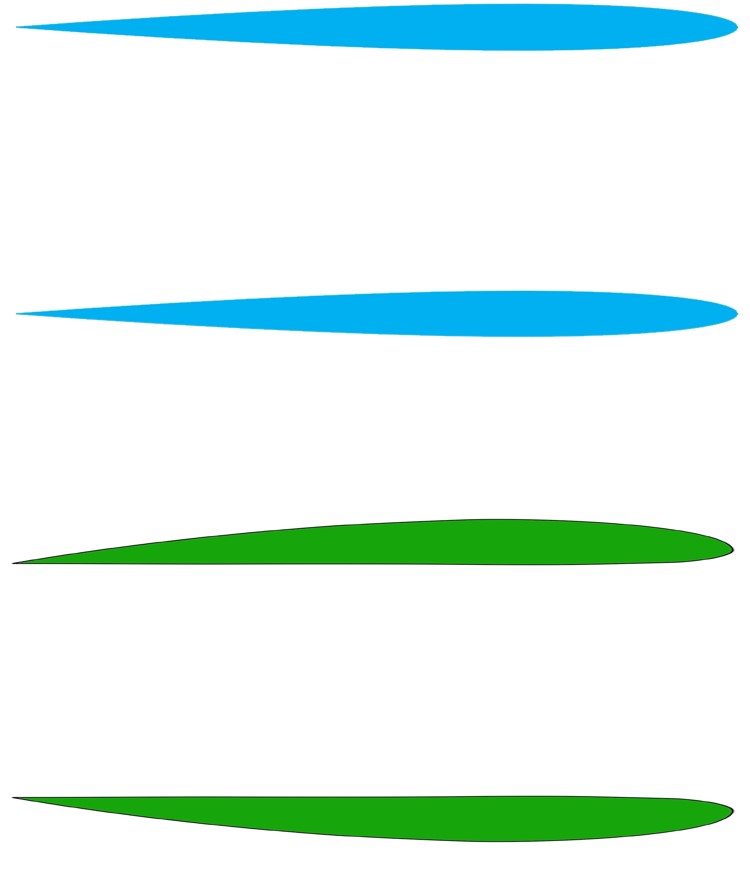 Is it possible to do the simulation with the foiled side out?

I have assymetrical foiled fins for the Bahne style center box in 5", 6" and 7". Been using the 5" fins, but I haven't ridden those boards for several months.

Ok so firstly, I must say again that I do not have the computer power to give fine results, like the difference between foil orientation or small changes, like fin spacing for example. These kind of studies would need a computer beast with 10 overclocked processors and it would need to run for days. And that would still be a "garage scientist" set-up. I am drooling over some CFD stations like that, but at $10k there are many other things I'd like to buy. And even though I would love to have one, I would still only use the results as inspirations or hints to work in certain directions (like I do with my current set-up). Nothing can replace reality.

I have read dozens and dozens of scientific publications on aero and hydro-dynamics and 99% percent of them conclude this way : "Our results in this study SEEM TO INDICATE, that so and so effect is taking place, FURTHER INVESTIGATION will be needed to determine so and so."

I love science but I recognise that for complex problems it is just one part of the process of progress, the others being intuition and real life testing. I posted the above images because they show how the flow is forced to stay attached in the bi-plane configuration. The bi-plane configuration has long been known to be a stall delaying passive flow control method, just like tubercles btw.

Here's the conclusion of a 2015 bi-plane study : "Experiments were performed to investigate aerodynamics of two-wing configurations at a low Reynolds number of 100,000 for a range of values of stagger and gap. These measurements have shown that two-wing configurations are a viable method of overcoming the challenges of low Reynolds number flight. Lift increases and stall angle is delayed significantly for certain configurations. Aerodynamic benefits are observed in the post-stall regime of the single wing."

The 20 degree angle seems to demonstrate a more significant improvement for the lower fin in the twingle.  However at 15 degrees, for the upper twingle fin, flow separation is worse than if the camber is placed externally at 15 degrees.

Yes obviously, we do not need a computer to know that an upside down assymetric foil is less efficient. But the twingle system is not an aircraft wing. I think that in this case we should rely on actual surfing and if Bill says that the foil inside/flat outside configuration is better I believe him and I try to understand why. Some other users of the twingle might prefer double foiled or foil outside better. Science is not going to change their minds.

Here's where I think the secret sauce is: With the foiled side out or with symetrical foils we have more lift but less of the venturi effect. Keep in mind that an assymetric foil has zero lift at a negative angle, say minus 3 for example. Then try to imagine what happens between 0 and 3 degrees AoA for all 3 possible foil configurations.

Is it possible to do the simulation with the foiled side out?

I could but as I said above I do not think I can produce meaningful results. Showing the delayed stall is the best I can do, differences between foils will be lost in the noise with this software and my weak computer. If you could spare a minute, I would love to hear your impressions of the differences between the two configurations, that would be more valuable than my cartoons.

Keep in mind that an assymetric foil has zero lift at a negative angle, say minus 3 for example. Then try to imagine what happens between 0 and 3 degrees AoA for all 3 possible foil configurations.

There is something particular about Bill's prefered configuration, that the two others don't have, it is more obvious between 0 to 3 degrees AoA.

There is something particular about Bill's prefered configuration, that the two others don't have, it is more obvious between 0 to 3 degrees AoA.

What is happening between 0 to 3 degrees for symmetric foils?

Thanks for the response.

For me, I haven't felt too much difference with the fin orientation on the Twingle, or with symmetrically foiled fins. The last time I rode the Twingle I think I had the fins with the flat side in and I didn't notice anything negative. The Duos are more sensitive with the fins, wrong location, size, type and you can tell immediately. The Twingle doesn't have that problem, or I just don't notice it as much.

The board below was my first attempt. It had 3 boxes and I rode this one with 2 fins and with 1 fin. I didn't notice any big improvement, but I didn't notice anything negative either. This board doesn't have a leash attachment, so I never push it too far. A few years ago I decided to reshape the board because it had a delam, and it was a little wide to carry under my arm, I also found that there was a leak between the center box, so I removed it. The last time I used this board I had a really good time, it was in smaller surf, maybe waist to head high.

The other Twingle board is more of a big wave board, so I ride it in overhead plus surf, it works fine. 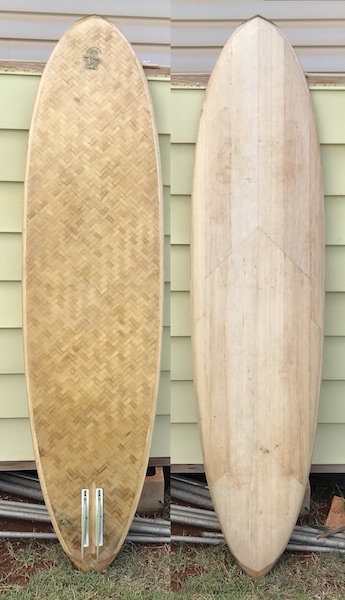 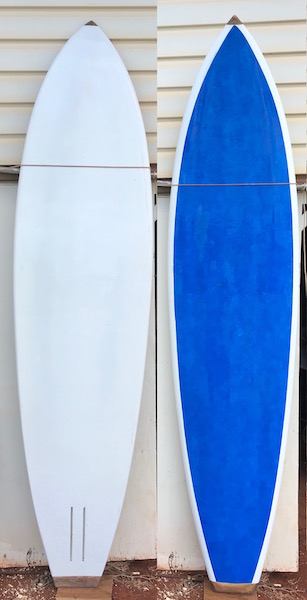 I think the question is, to what extent have symmetric foils been tested?
The Venturi effect can be manipulated with symmetric foils by varying chord thickness and separation distance between the twin foils.

BTW I am a scientist.  And for presentations and publications, "seem to" and "appear to" are known as "weasel words."

May a better computer come you way, WAO!

Thanks for sharing, very interesting.