WRT the above shape, it looks fat-boi and it is fat boi.  But the curve of the template isn't excessive or particularly slow.   Here's an overlay of a 6'1" x 18.5" hpsb.  Take 3" off the nose and egg it, and the remainder of template curve  - which is what engages with the wave - parallels that of the hpsb.

The point I'm trying to make is to start with what you're trying to do and work backward off of that. If you're surfing conditions where there are big tidal swings and lots of water moving around then you need more length and paddling speed.  If you've got the length then you can use the rail line to drive off of and you don't have as much need for a lot of fin area out at the rail to drive off of.     Wider boards are quick but harder to control, narrow boards are easier to control but not as naturally quick.

And whatever you do, set your design up first and THEN figure out which blank and rocker you need to make it work.  Better to wait for a bit for a custom rocker than to try to make do with what they have on stock.   Ask me how I know.

Gdaddy I like your angle on this subject.  Thst quad looks like it's well thought out. I may revisit one of my quads and adjust fins for bigger days.

I went back to the drawing board and had a moment! This 7'6 I posted above was a great board, but it was very stable and predictable. My love of twin fins and 2 strokes requires something with a little.... Character.

I took an old egg template and flipped it round, to make a wide point aft mid, with a rounded nose and a fat pin tail. Think the tail may be a little wide but I like what I see so far. This will be single, no side bites. Pinched 50/50 rails, rolled bottom to flat with a double concave between the feet and v aft. I'll move the rocker apex to the wide point and foil the nose back to the front foot. Tail will be hard edge from the fin box and flat right at the tip.

I rebuilt a fish a while back with the idea of building the board around my stance, wide point at front foot, concave between feet, volume in centre at rear foot and accentuated rocker after, worked out really good.

Any thoughts on this template? 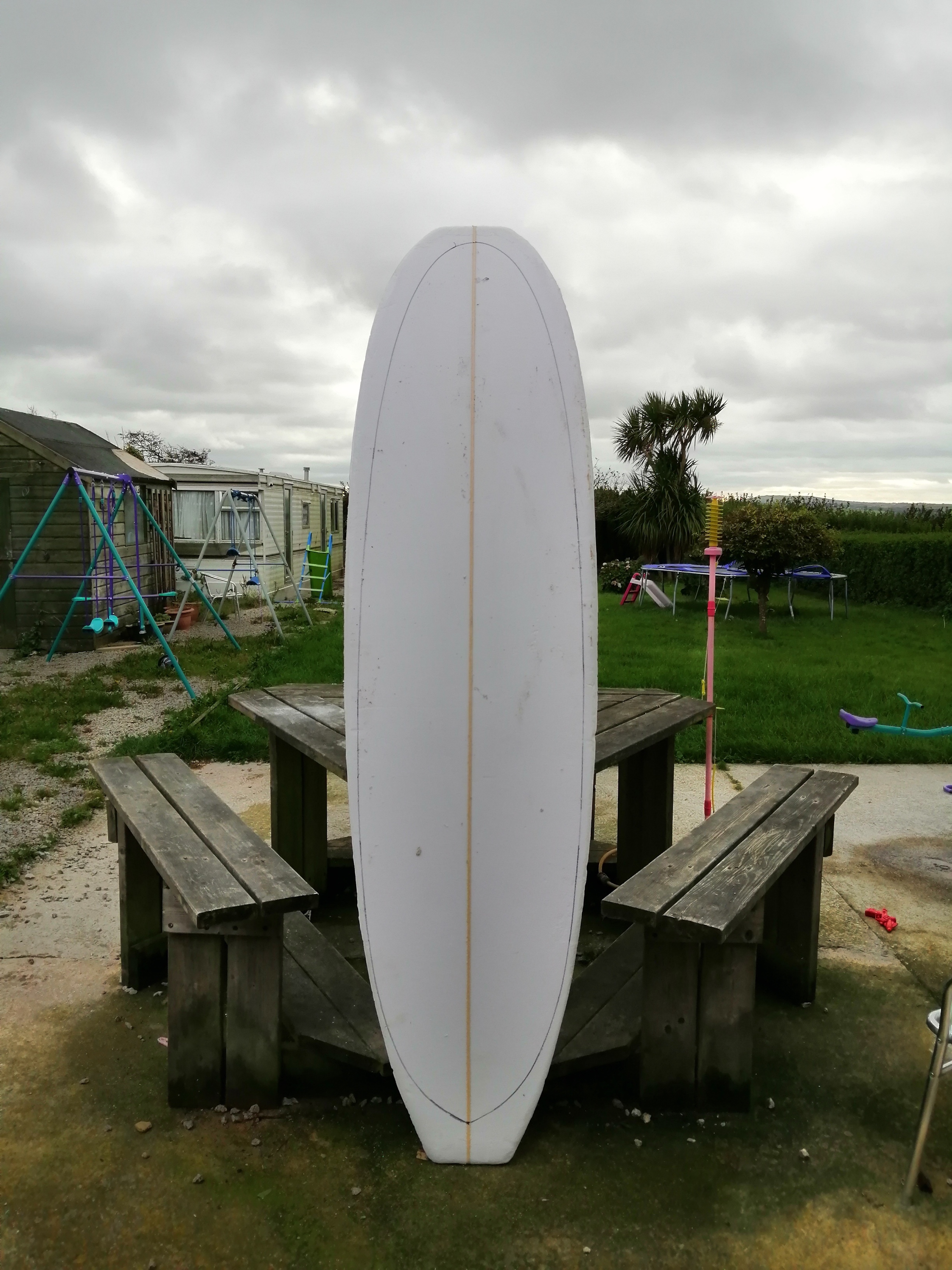 I like that template a lot, but then again I've always been a sucker for the Transition Era shapes where they were cutting the tails off of longboard blanks and surfing them off the tail.  Keyo, Gordon Woods, Bob McTavish and the rest.  I never got tired of watching clips of Wayne Lynch and Midget Farrelly and the others.  I wanted to surf those conditions like that.  I always thought the AUS shapers were on the right track with their early midlengths, and that most of the mainland US surfers should have gone in that direction instead of the boards the Hawaiians were building for their conditions.  .

10 years ago (10/2010, as a matter of fact) I did a real similar setup except at 7-0.    And for what I was using it for, it was the the best singlefin midlength I ever surfed.    Flat rocker, semi-hull bottom but with an edge in the tail, finbox a little forward (I should have gone even further forward).   Fat ass with a huge Velzy Classic or similar fin with some flex. Stringerless EPS, HD PU rails, bamboo deck and bottom.    It came out too light at first, so I went back and added another layer of 4oz to bring the weight up and get a little more glide.

One caution about wide point + flat rockers is that they're more touchy about your paddling position and they're less forgiving when it comes to your timing and transition from paddling to surfing.  If you're out of position you can bury the nose even while paddling it, and if you're timing is off the wave can run right over you (fat ass picks the wave up very abruptly).    So it's more approrpiate for a surfer of intermediate or better skills than for a novice.

This board was not suitable for a broad range of conditions, but for the conditions I was aiming for it was great.  Swamis or Church or (sometimes) the fat high tide beachies it was good.  when you want to stay with the wave and surf it from top to bottom.   But in quick dumping waves it was too much of a hassle, and it was too slow. 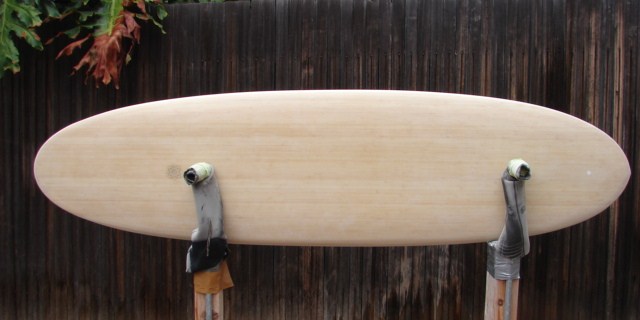 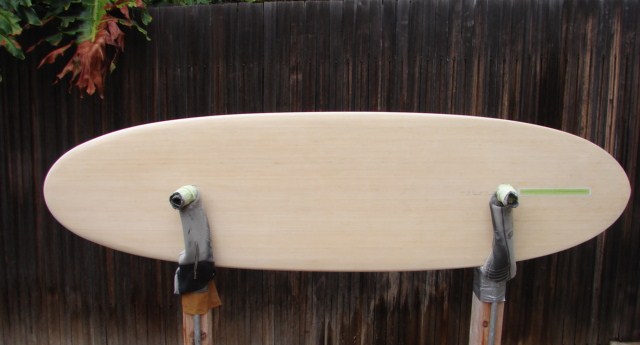 I got older and decided I needed to transition toward longboards so I built a longer version, blunted the tail and bumped the nose rocker to 4".    7-10 length.  It works, and it's fun and it's easy to surf, but it's way more board than I need or enjoy at this point.  I should have gone with 7-4 or so, and more similar to the 7-0. 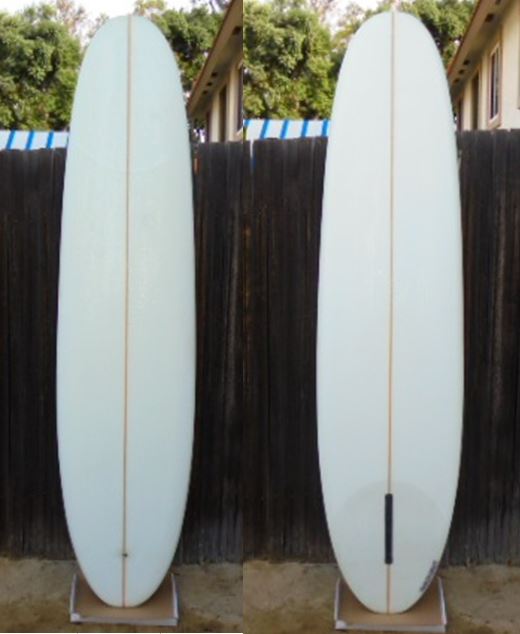 I love those outlines. What sort of rocker did you run in the super flat one. And nose tail widths?

I love what lovelace did with the v. Bowls but I can't really see it working as well with my conditions as it does for his!

One thing I've found with the wide point forward boards is you can't just throw it under the lip like you may on a twin during take off. I'm hoping rh wide point and apex of outline will allow some more radical moves, and add that little excitement that can often be missed at this length.

Alot of the local shapers here are aiming there mid boards at the begginer/Inter level. There more shrunk down minimal than performance orientated. Great if you at that stage.

When we look at West Coast U.S boards over here they are Allways finely foiled, thinner rails and flatter rockers.

Hopefully this next few boards I shape will bridge the gap. I really enjoy throwing a mid legnth round and it Allways leaves me feeling inspired

If I recall, Lovelace started doing his v.bowls a month of two after I finished the 7-0.  Now half of the longboard shapers are doing wide-point-back midlengths.  I think everyone was all watching the same things and working separate but parallel design tracks.  At the same time I had also been watching McCoy and his nugget design he had been doing for so long.

With the 7-0 it wasn't THAT flat (at or just under 3.5"), but flat enough for the length.  For the 7-10 I was watching what Broian Hilbers of Fineline was doing with his Hot Generation and the round tail variant, his Puerto Rico; except I widened the tail and tweaked the nose a bit by adding another control point  for the nose so I could get that trash can lid shape.  But between the length and the widths, that's why the rails on the 7-10 are more parallel.   Longer lengths with the same widths = less curve.

For me, the first wide-point back I did was a reshape of a 6-10 egg I had ridden into oblivion.  In that design I was trying to do a McCoy+hull mashup that I could surf off the tail.  I did that one as a single fin but later added quad boxes.  Due to the length it always rode better for me as a quad.    After doing this board, I never did another fish because FOR ME  this design out-fished the fish.  . 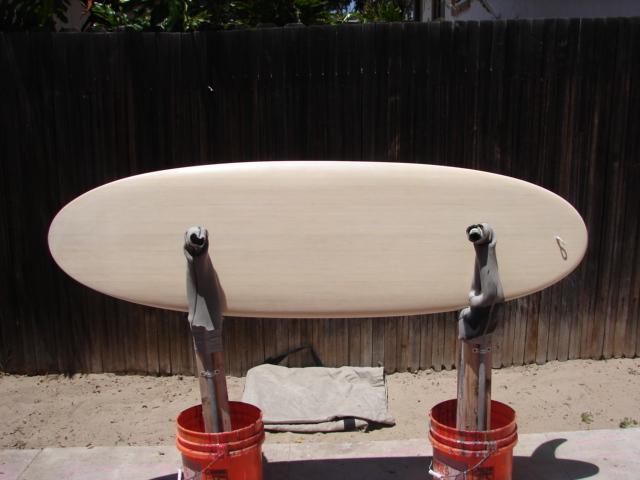 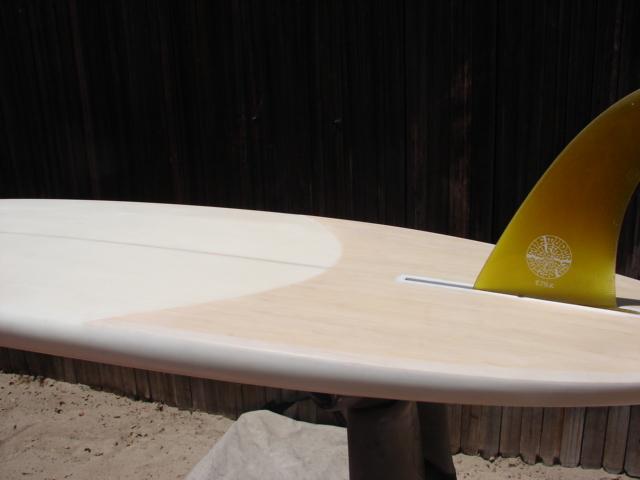 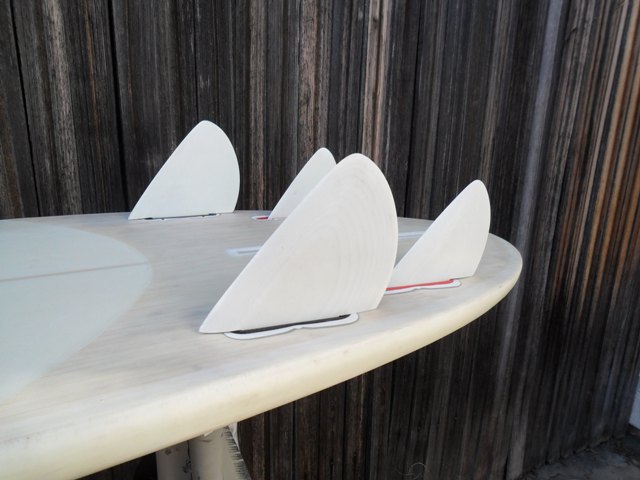 Excellent input gdaddy and thanks for helping in my thread. I follow this thread too, very interesting!

Do you use BoardCAD to design your outlines?

I use it for my current projects now and I wonder if people are using control points at the 1' mark from nose and tail. Until now I only used the control points for the wide point and for the tail block.

Yeah, that's how I did both of the end curves; added an additional control point at both ends.   That way you can tweak the curves at the ends more independently of the main curve off the wide point.

Yeah, that's how I did both of the end curves; added an additional control point at both ends.   That way you can tweak the curves at the ends more independently of the main curve off the wide point.

Picked up a new planer this morning too replace my inherited black and decker which was eating belts. It's an erbauer 240v 4mm planer and the handle setup looked about right. Little more setback than usual. I stripped the guard and kick stand off and inspected the base plate levels etc l. Was pretty good. Took her out to the bay and did the first cuts wide open and the end result was super clean! I will do a thread on it at some point because I know UK shapers are a bit stuck for choice, this could be our answer to the Wen model!

Anyway. I stuck to my off the cuff ideas and I've gone with the above template and I've gone a bit mad with the bottom. I'm hoping it will have that speed in the curl when stood up front but be really nimble off the tail.

Must confess I haven't quite decided on the rails, Mayeb 50 / 50 pinched, but with down in the tail and soft up rail in the nose. 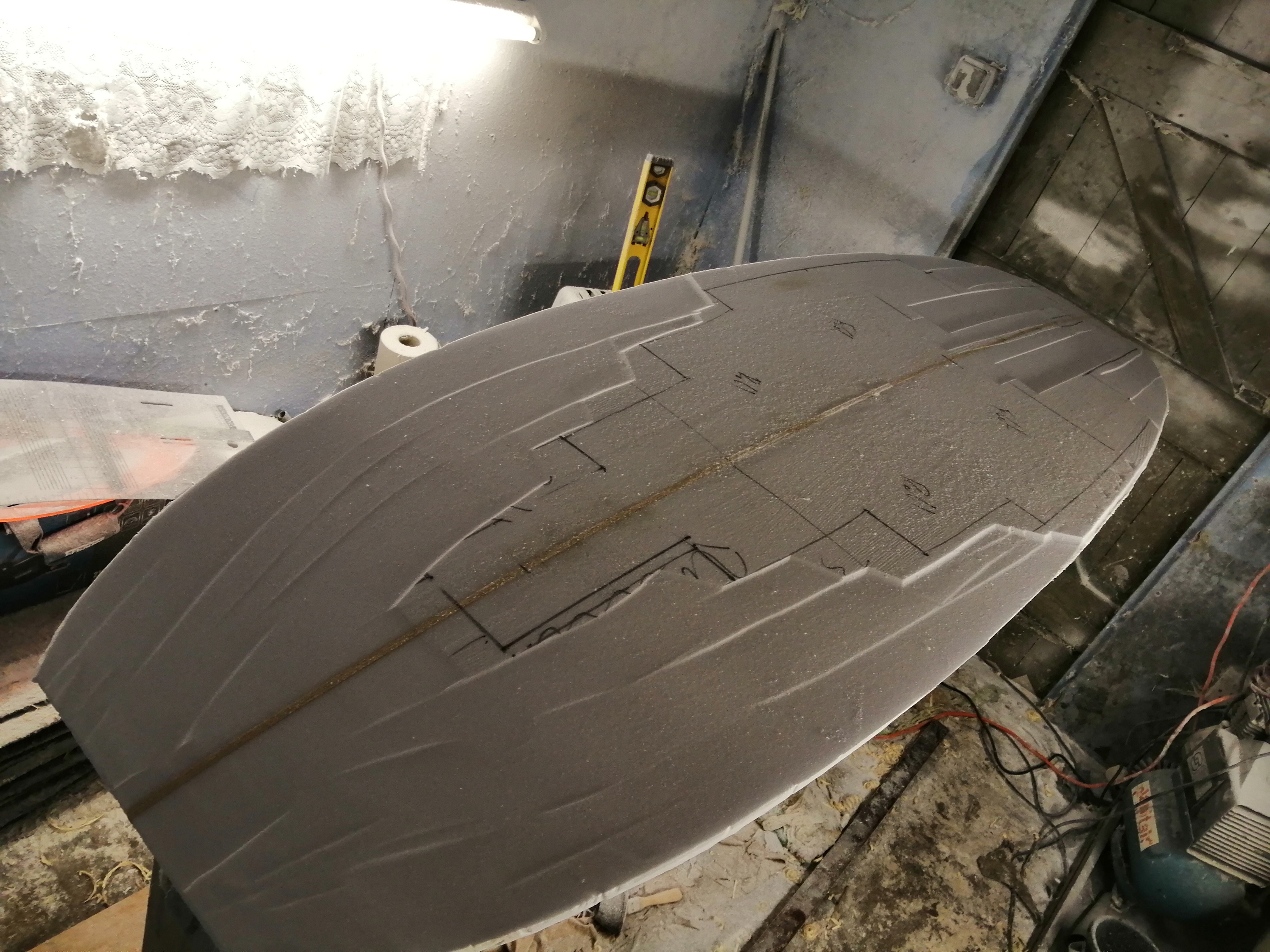 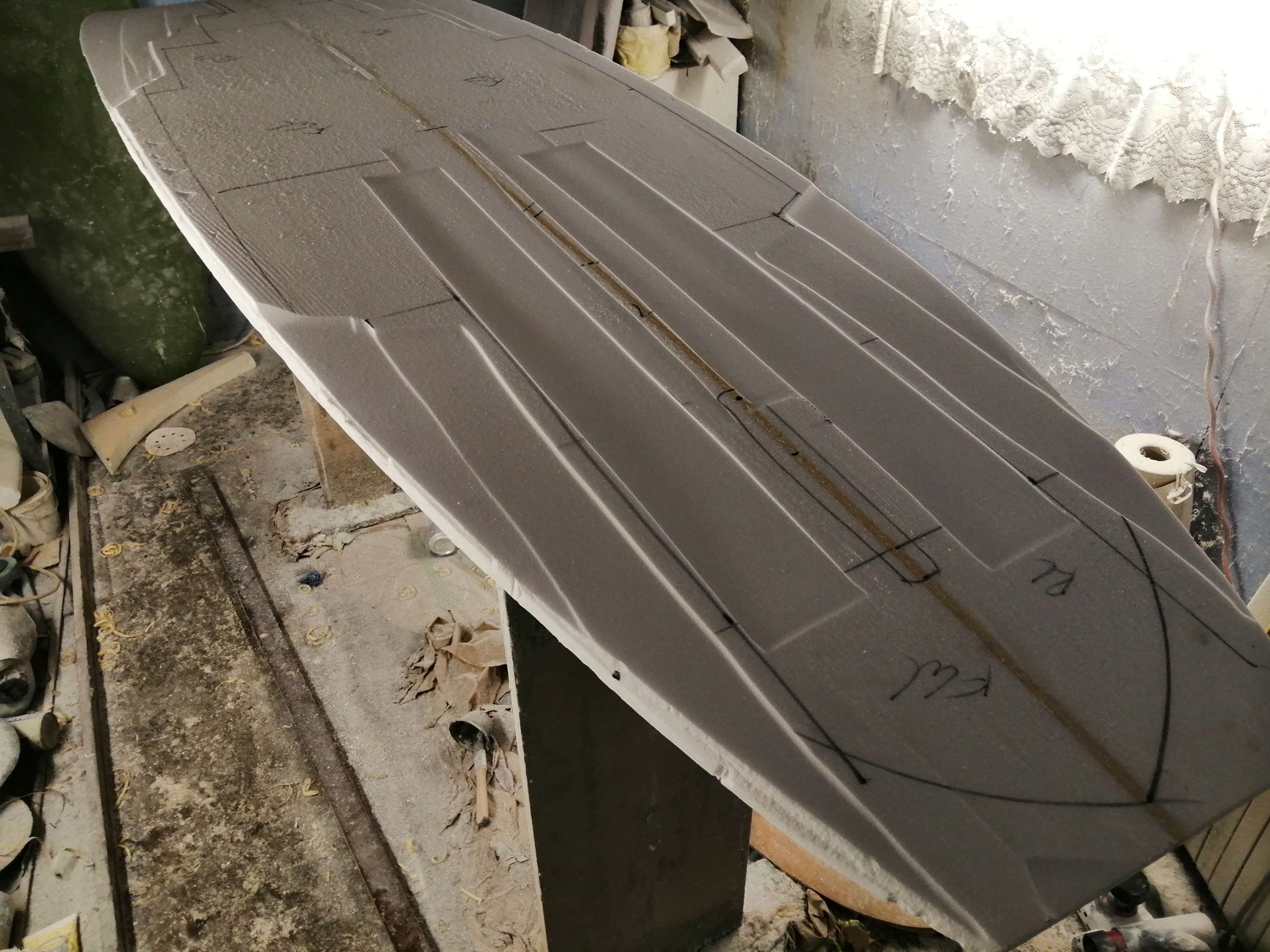