I designed and shaped this one a while back now and its been sitting in the shed leaning against a wall for a few months. Has had a few dints in it during the process. At some stage, I’ll but some pics of the specifics of them and the fix. I based the outline on the Album Plasmic, but I elongated it and narrowed it to 5’ 8” by 20” by 2.5”.

Yes it was done on Shape 3d but if you paid attention you know I’ve just finished a fully hand shaped number so don’t hate on it for hates sake.

My plan is to do a double 4 bottom and deck, one layer is a hybrid cloth from Colan Australia. It have a 15-18 mm strip of basalt down the centre then a space of about 80mm out from that which is straight glass weave, then there are multiple single strands of Nylextra every 15-20 mm out to the edge of the cloth. Then there is a standard 4 Oz cloth over the top of that.

There is a strange issue with the cloth. Due to the Basalt strands being slightly thicker than the standard weave, where the 50 m roll has layered on top of it’s self the circumference of the cylinder gets slightly larger as the roll gets thicker. This has meant that the centre of the cloth when unrolled on the blank is slightly longer than the rest of the strands in the cloth. So the basalt centre section of the cloth wants to sit up proud of the blank in little waves, when I used it last time this resulted in some high points along the centre and some sand throughs of the basalt. Getting the Damn thing straight is a nightmare. I have a plan to try and use either some temporary tape on the nose and tail to pull it taught as I start the lamination, trying hard not to get epoxy on the tape, and pull it off and laminate the nose and tail sections last. All the while praying that it won’t spring back to the wavy form after I remove the tape.

Anyway any thoughts or ideas are welcome. 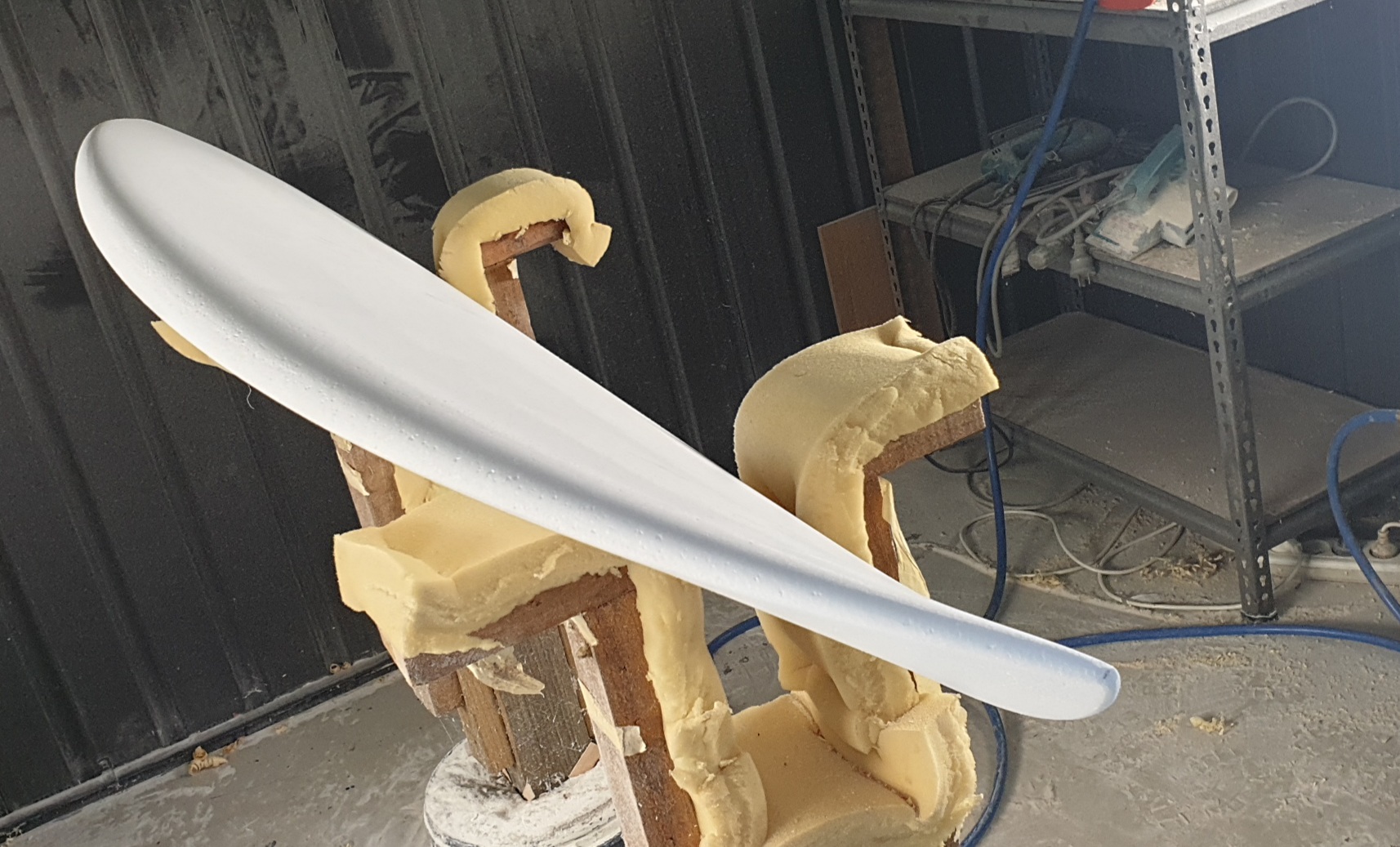 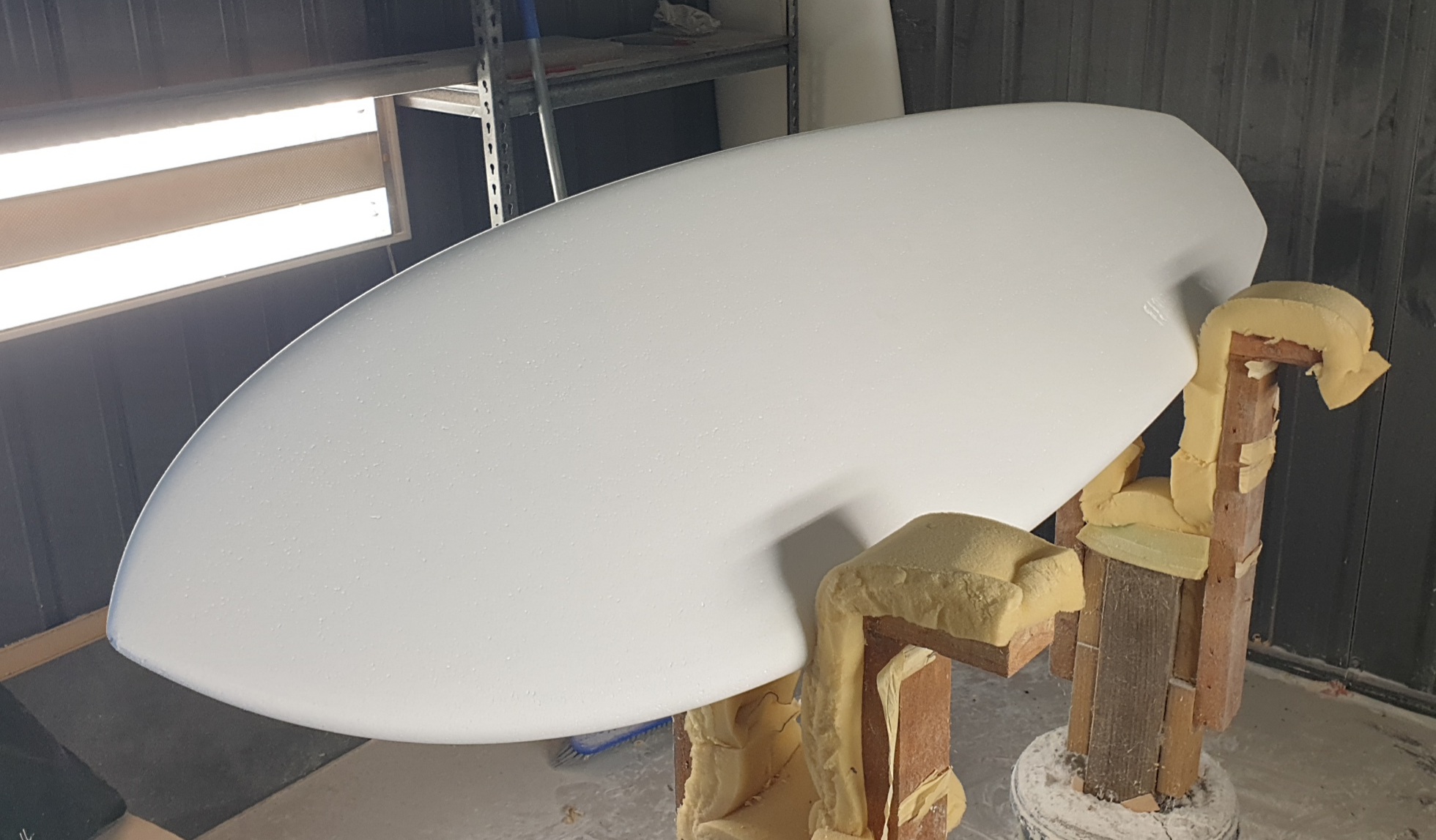 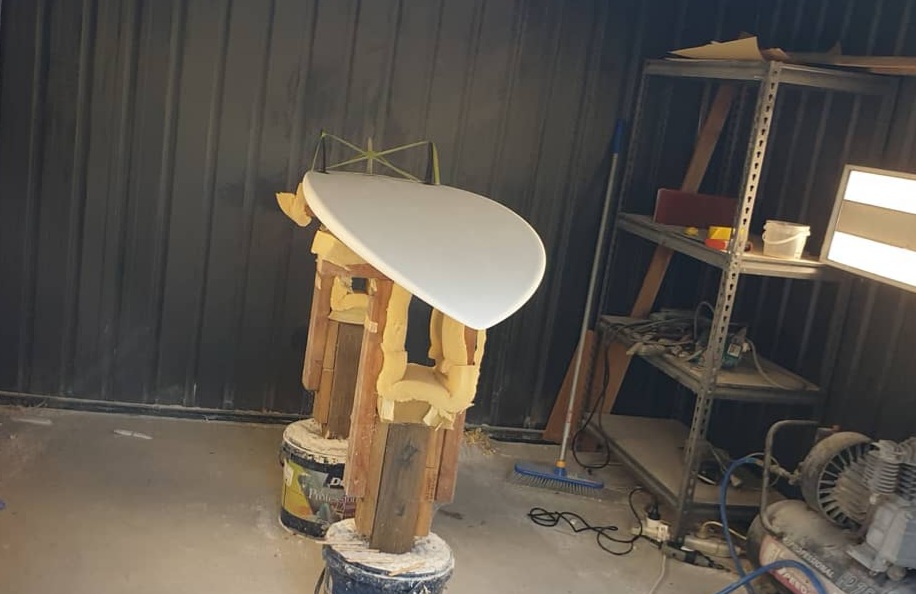 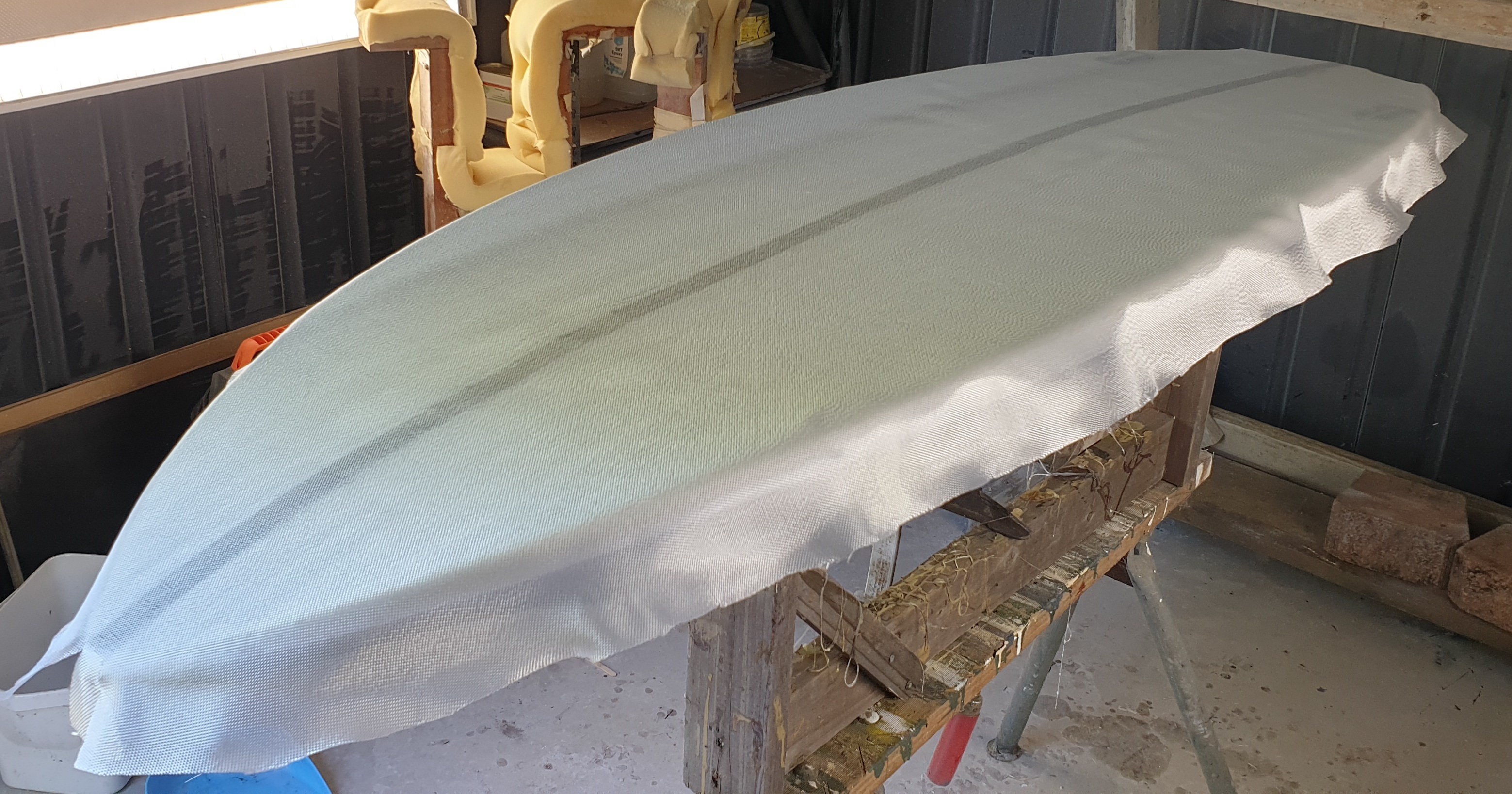 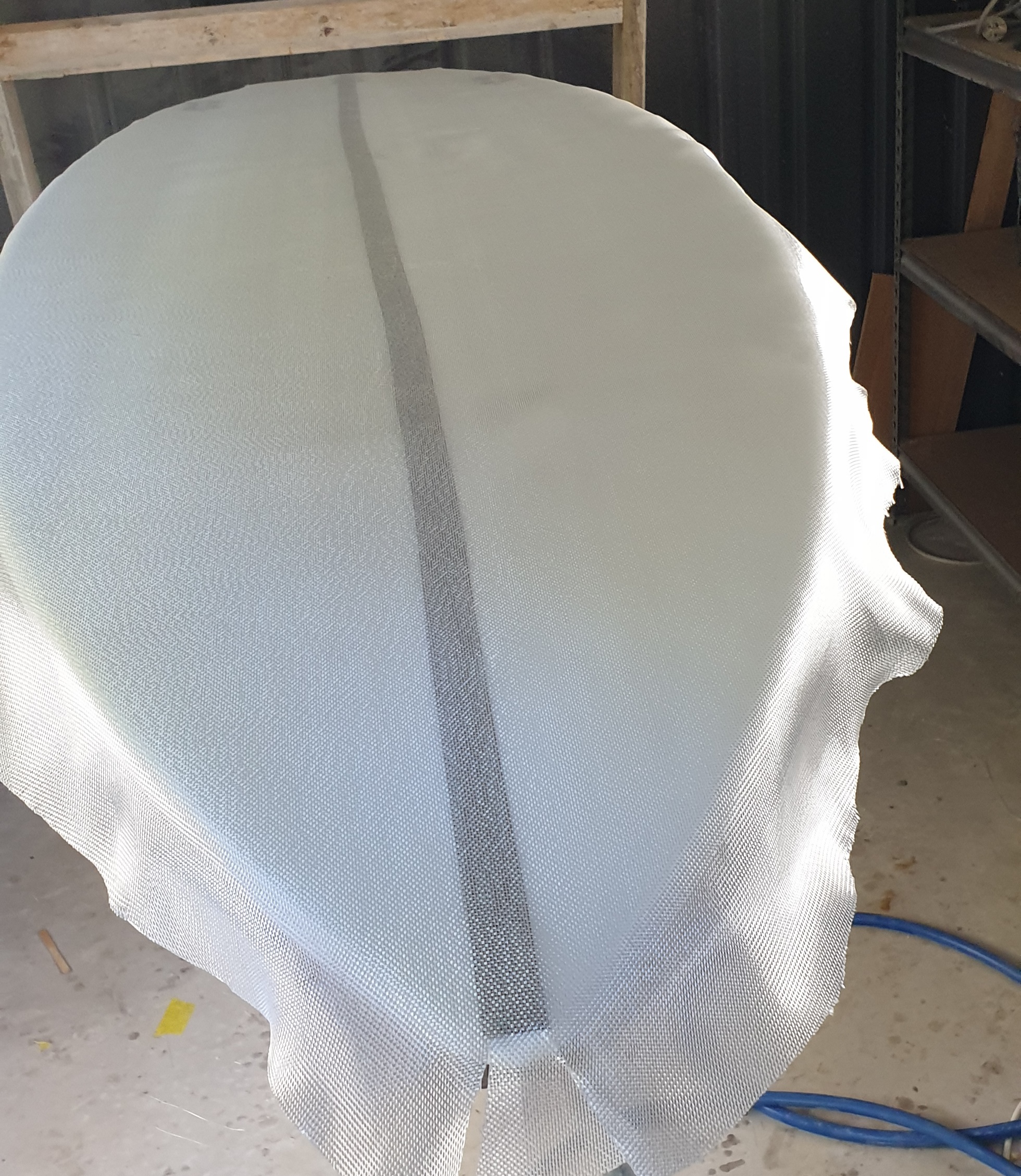 Ps, the outline and hips do my head in. i look at them for hours and they look off. But when I put the shapers sqare and set square on it to check for inaccuracies they are like 1mm or less off. So I quit messing with it.

Looks like a sick board! At least if it floats you. It would not float me. I have no idea if 2+1 will work on that board. I have found that Twin or Quad is the way to go for me. It seems to suit my surfing best.

Nice job.  If you don't do stringerless that often, they are hard to do.  But looks like you were able to shape it up and keep it sym.  A trick is to order your blanks with a center glue line.  Gives you a "point of reference" and is still stringerless.

With stingerless blanks I've used a razor blade to slice a centerline reference at each end, and connected them with a line of masking tape, one edge being right on the line.    The cuts remain no matter how much sanding you do.

With regard to your cloth, one technique I've used when the weave was wandering was to use another set of hands.  Two people working from opposite ends to add a *very slight* amount of tension up the center section of the cloth and then lay it down.  You don't want to be stretching anything out of shape.  Once the center 4-5" are set you can go back to the middle and work your way out to line the rest of the cloth up with your center section.  I use a short squeegee with a really gentle stroke to do that.

A few times I even spritzed the centerline of the blank with a little spray adhesive to keep the center tacked down so it won't move after I laid it.  Obviously, I only hit the very center and I only used as light a pass as I could lay, otherwise I'd have been fighting the rest of the cloth.

So I did a quick rime lapse of me laminatingnthe bottom. And I have linked to Facebook post. Hopefully you can see it. Got inspired to do something a little different with the tint. Worked ok, not at @superwolf skill level, but getting the idea of how he must do some of his epic work. Tends to be a little resin rich. As in you need more resin.

Black has gone a bit see through as it dried so I will do a black poor over it when I do the filler/ edge.

First time I have used these purple and red tints. The purple is really cool but the red is more pink.

I'm co.fortable with my masculinity so its OK. 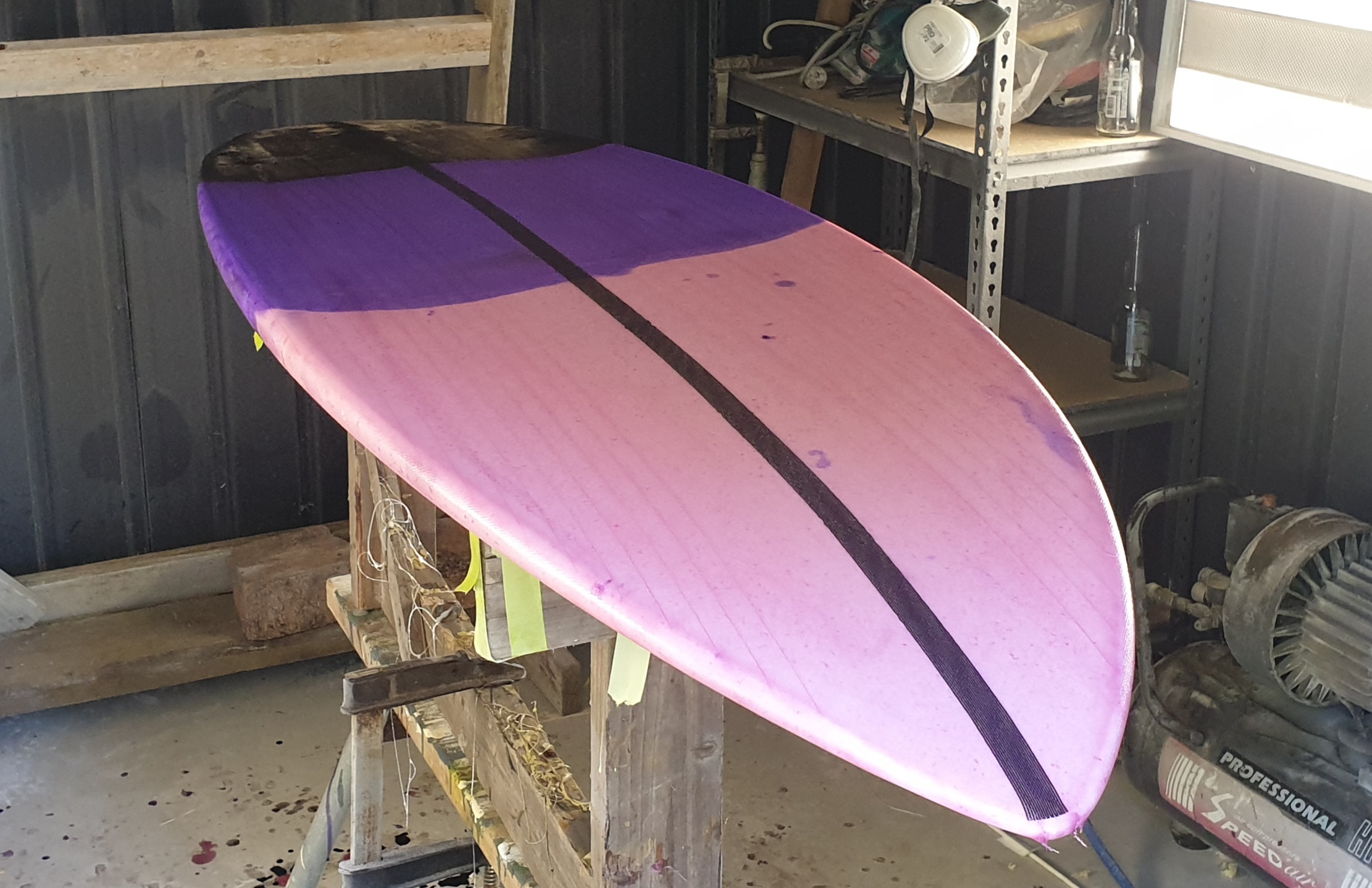 Lammed the top and filler coated the bottom. Made the tint too dark with the purple. But still looks  pretty cool. Bubble gum or licorice all sorts.

These flowers opened up in the garden the other day and they seem to have been influencing the colours. Considering the pink was sold as a red. And I wanted red and purple and black

Ill add a link to the hyper laps of the laminating later.

Don't know squat about shaping but I think this board looks cool!

It would be awesome if someone can let me know if the link to the Facebook posts with the time laps  work.

The video is within a private group.. can not confirm until the join request is accepted.