This next board I'm planning will be the 2nd board I shape so I'm not confident or knowledgable about shaping yet. Also, is a PU blank fine for a Mini Simmons shape even though PU is heavier than EPS? And how much rocker would be ideal. Lastly, please let me know if there's anything I should change about my current design (attached below).

For reference, I'm 15, 158 lbs, 5' 7, and a beginner/intermediate (more on the intermediate side) surfer that surfs small mushy Oregon waves. 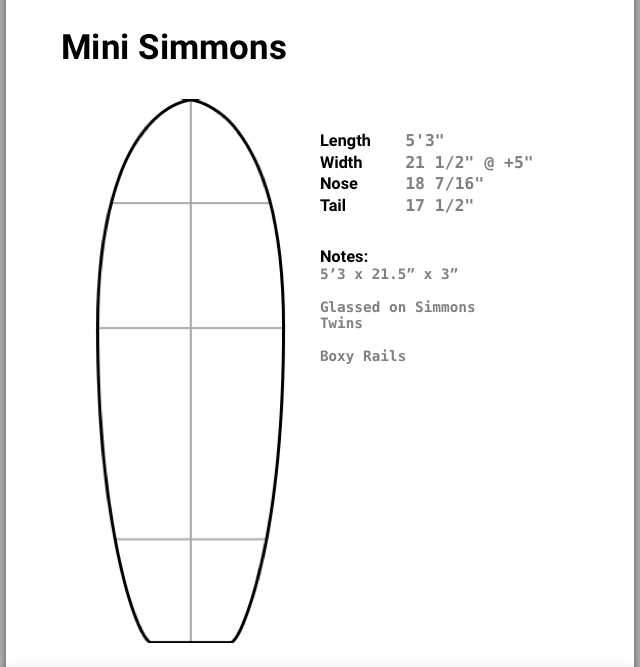 If you're doing a Simmons then a U.S. Blanks 5-10RP would do it.  You'd put the template right in the middle of the blank.   Personally, I'd opt for ordering it with 1/2" or 3/4" less nose rocker but the actual Simmons had a fair bit of rocker for its length.

With that said, your template is closer to that of a traditional fish than to a Simmons.  The original Simmons shape uses a round nose, the wide point is well behind the center and they retain a super-wide and chunky tail block.

Here are two pics, one of *THE* original Casper, the other of a Zippi fish (which is a little different than the original Lis Fish from the 1970s in that Zippi uses more curve in the tail and runs a narrower tail block.   The Casper board is the one that Richard Kenvin ordered from Joe Bauguess (who is no longer with us) back in the mid-2000s.  The current shaper for Hydrodynamica (Hank Warner) is putting the wide point at the center, which changes the curve, so the new ones aren't the same as the originals.

You can see the difference in the outline curves and the wide point and the width of the tail block.  THe Casper pic also shows the foil where they scooped some of the thickness off the deck near the nose and again at the tail.

A Simmons is a somewhat difficult shape to get right because there's a lot going on with the bottom contour and it's transitioning from belly (in the nose) to concave (in the tail) in a very short length.   They're somewhat difficult to surf, too, because of the wide tail block and how far back they mount the keels.   The guys surfing them have to basically muscle the board around off their rear foot in order to get that tail block to come around.

You can make changes to any shape to suit your preferences so that's up to you.  That's what building your own is all about.    But if you want it to surf at all like a Simmons you'll need to move the wide point in your template back to the center (at least) and straighten that curve in your tail block by widening it. 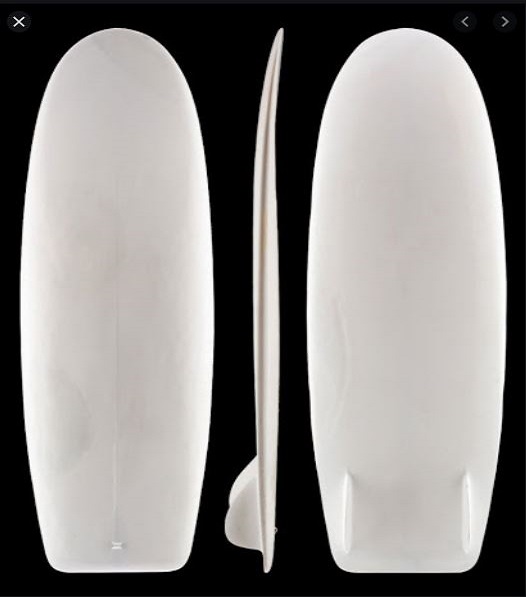 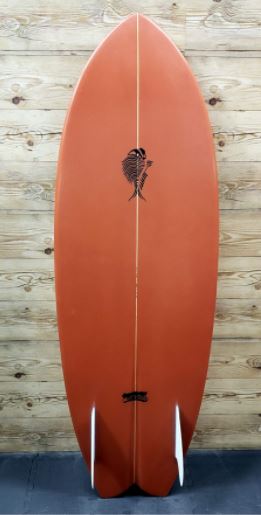 If I were to replicate the outline of the traditional simmons you attached above, but kept the bottom contour flat maybe with a tad bit of a vee off the tail, would that work? How do flat contours surf in your experience?

Everyone has a different opinion about bottom contours.  On a Simmons type design I'd favor using belly in the entry, a flat bottom w/chine through the middle and a very subtle panel vee in the tail.    And when I say subtle, I mean really shallow, like less than 1/8th on the chines and about 1/8th for the vee. You almost need a straight edge in order to see it.

I believe a little contour goes a long way.  I also subscribe to the idea that wide tails work better with convex whereas narrow tails work better with concaves. That's why I'm not that interested in adding the concave to the tail of the Simmons.  That design already has a lot of surface area in the tail to generate speed; it doesn't need any more.  IMO, what wide tails need is more control, not more drive or lift.     However, other people's preferences vary greatly.

Here's a grahic showing the rail cuts and profiles for a 1970s Lis-style fish. I'll add the template image as well.     They show the chine through the middle.  It's that flat panel between the rail and the bottom.  One thing that feature does is to smooth out the transitions in your turns, otherwise a flat-to-rail contour on a wide shape rides on top of the waterline more and is more twitchy.   I use this type of bottom and rail layout for a lot of different shapes.  With some I'll run the chine all the way to the nose, with others I might blend into belly in the entry instead.

But as I say, other people have other preferences, and they all work; albeit often to different effect.

One more item; take note of the difference between the original Fish shape vs the newer variant by Zippi - the rear quarter is straighter and ends up with a much wider tail block.   This straighter shape in the rear quarter will provide more drive, whereas the curvier Zippi variant which ends up with a narrower tail will provide more control.    Every combination of design attributes winds up providing a different compromise.   There is no free lunch. 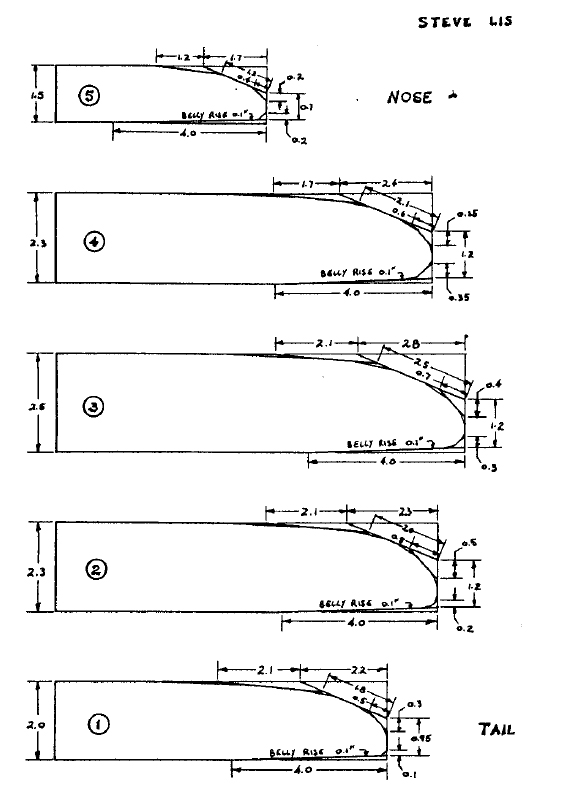 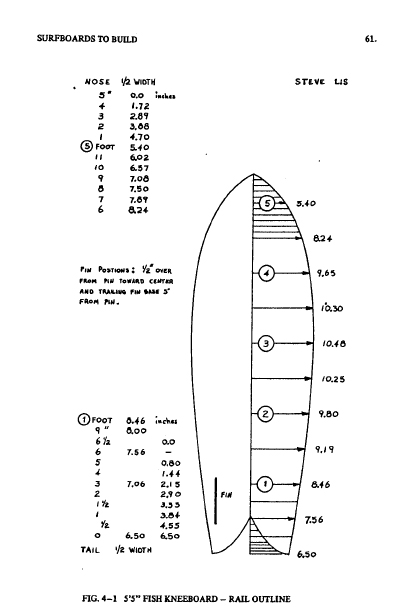 When I'm talking about belly I'm referring to the convex contour from rail to rail which smooths out the entry.   Here's a pic of a more extreme example - the pic is from the nose looking back and the board is upside down, so you can see both the nose rocker and the bottom contour.  It's like the bottom of a spoon.  The Mini-Simmons designs use a similar but perhaps more subtle variation of this bottom in their entry.  You can kind of see it if you look at the rail profile shot in the pic I posted earlier.   With the Simms, the apex of the rail runs from 20/80 in the nose to 80/20 in the tail.    That's harder to shape than it might seem. 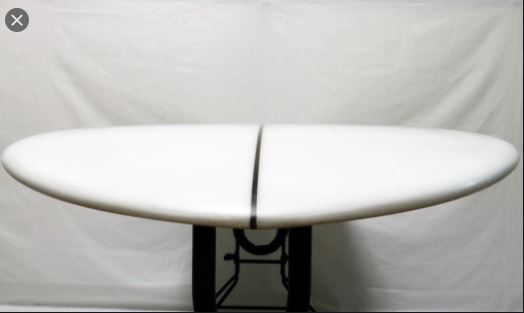 Thanks that was a lot of info; I think I'm starting to understand the bottom contours for this design. Everything going on on the bottom has to be subtle and minimal to balance out the design characteristics. So now that I have that sorted out, I'm torn on the glassing. Since it's a PU will a 6oz warp glass + 4oz s glass on top and 6oz warp glass on bottom be too heavy? What glassing schedule would be ideal to make the mini simmons as durable as possible but also keeping the abilitity to float through small waves. For weight reference my local shaper supply carries yellow density Millenium foam blanks.

Simmons are foiled thick and retain that "golden ratio" of width x length.  So in the shorter lengths they get wider as they get longer.   They carry a lot of volume for their size.  As long as you don't go too thin or too narrow you'll have plenty of float in a 5-3 length.

Here's a Simms/Fish hybrid that Matt of Album Surfboards (I think he's in San Clemente) did some years ago.  5-4 x 21.   At the time he said he weighed 190# and this was his personal board.    You're not going to have any problems with float or paddling on a 5-3 Simms shape.    Just don't try to go too thin - they're normally cut real wide and thick for their lengths. 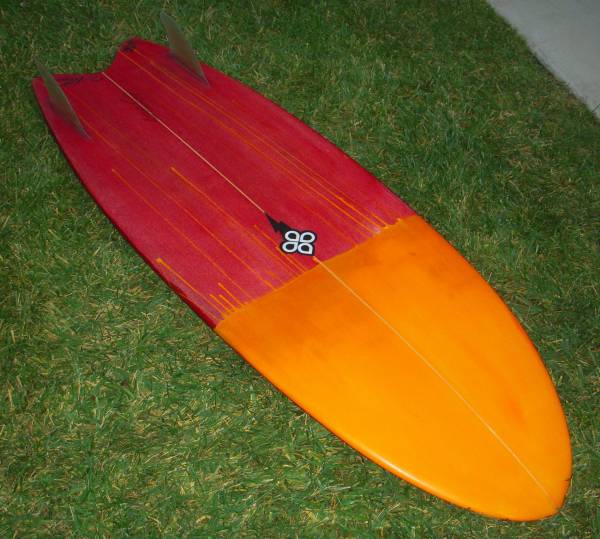 For glassing and since you're just starting out with building your own you should keep it simple.   One layer of regular 6oz e-cloth on the bottom and 2 layers of 6oz on the deck.   Clear, no color.  That way you won't have to hassle the color when you add repairs because after all, you will be adding repairs to the board later on.   How carefully you handle the board around the house and in transport will affect the durability of the board more than anything you can do with an e-cloth + polyester resin glass job.