My friend gave me a blank in exchange for glassing a couple boards, so this weekend I made a little pig for the beachbreak and jetty out front.

17 3/4" nose, tail I forget but it came off an early weber pig in my garage. Nose I widened by pivoting the template at the widepoint.

Just finished before work this morning so I'll try it out tomorrow early. 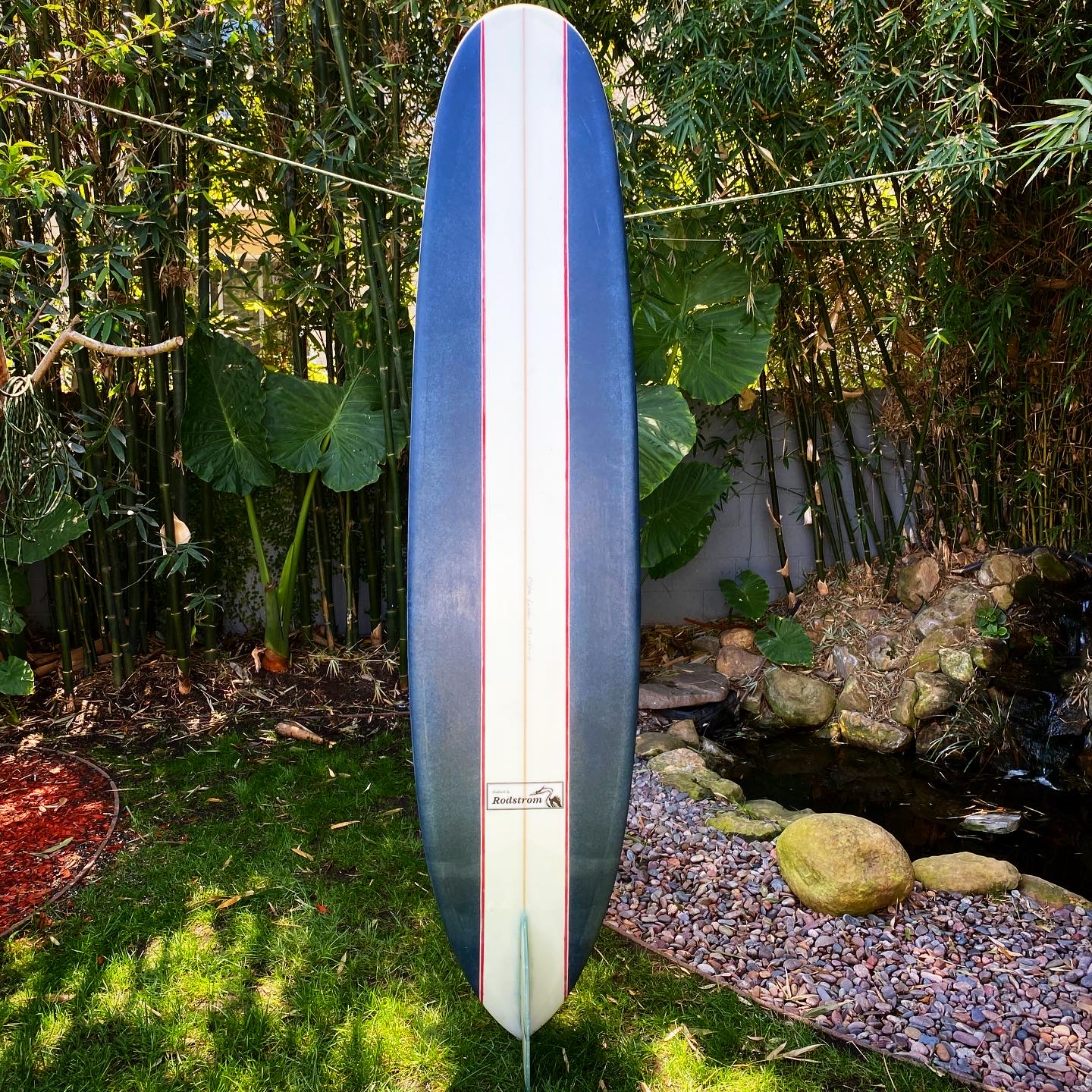 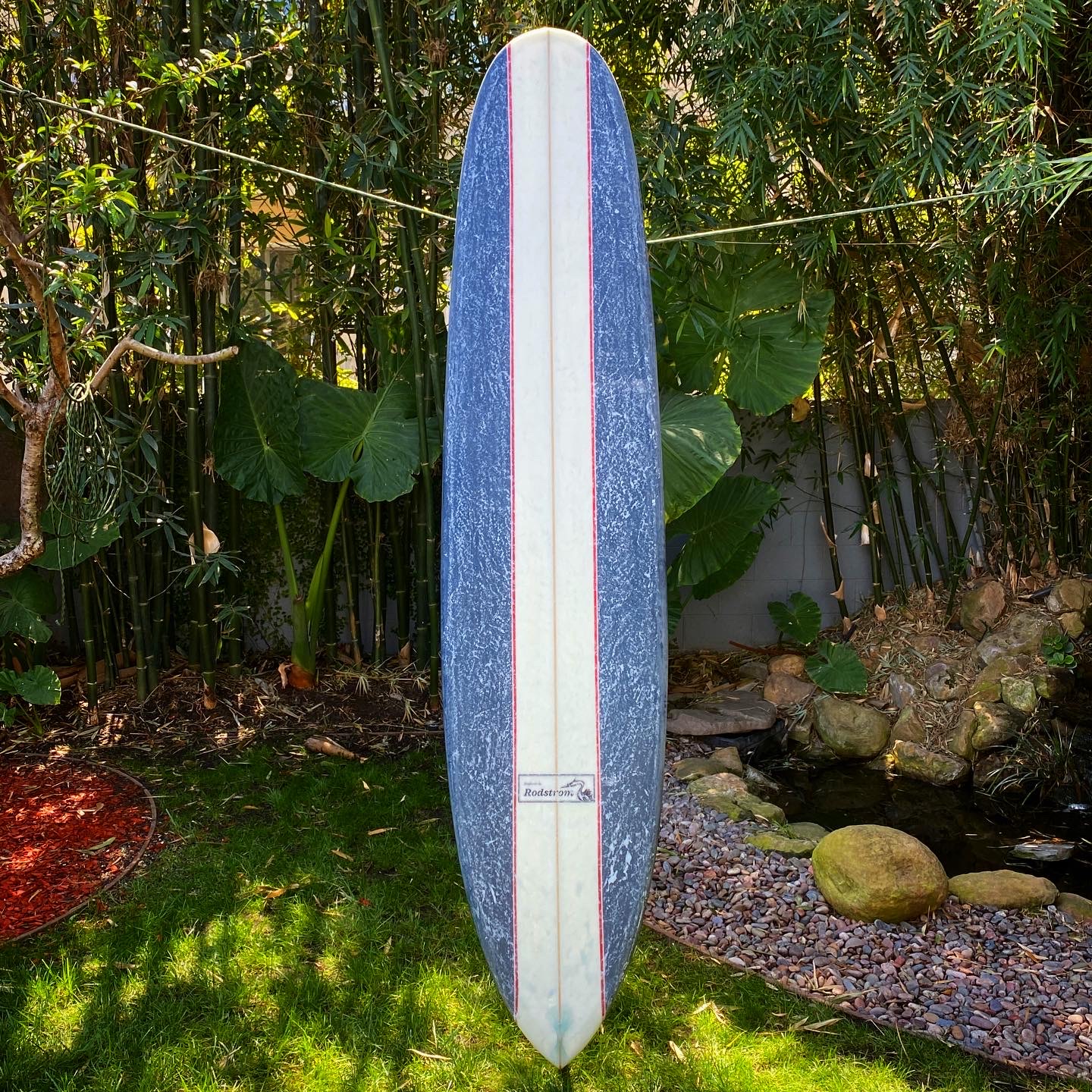 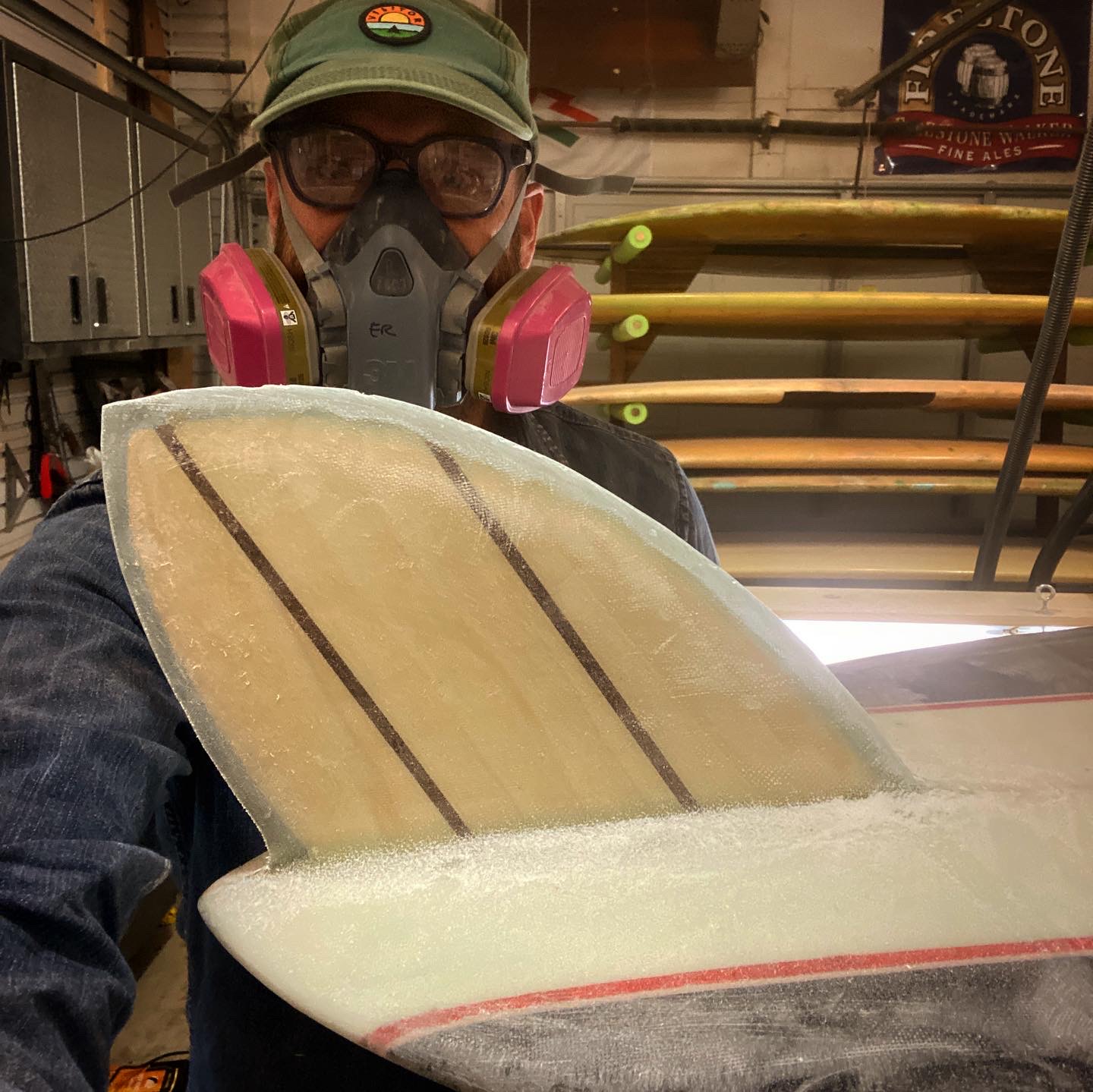 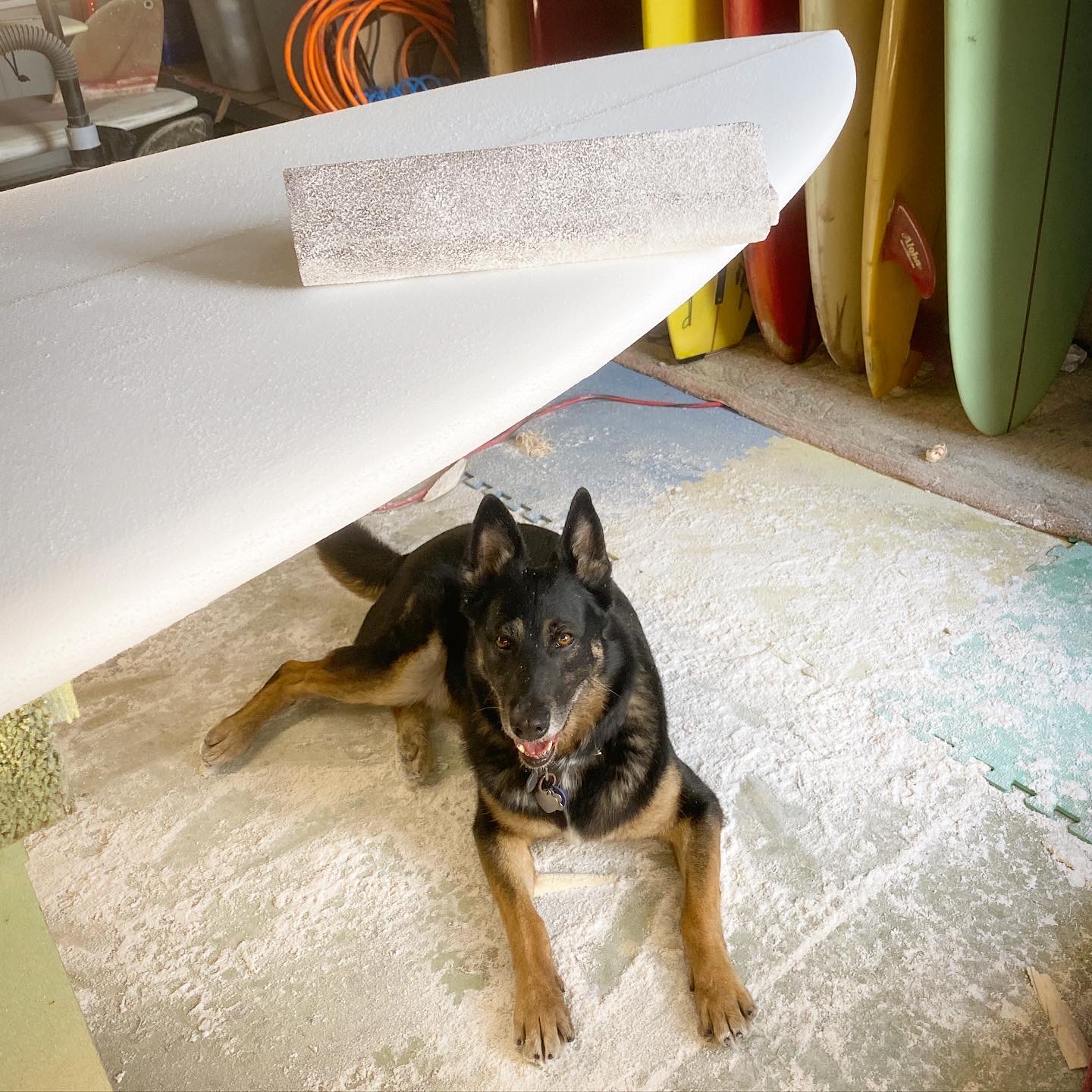 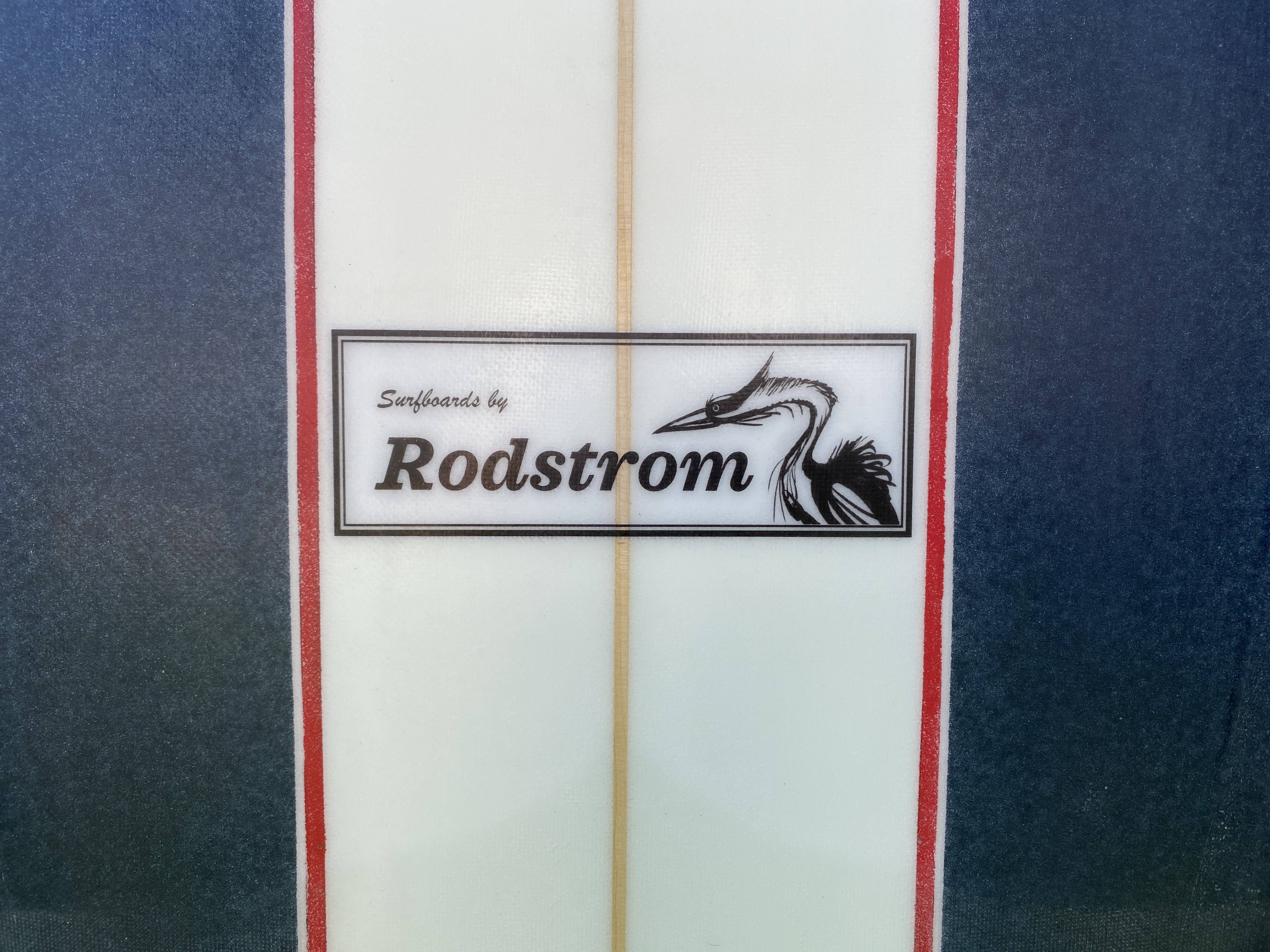 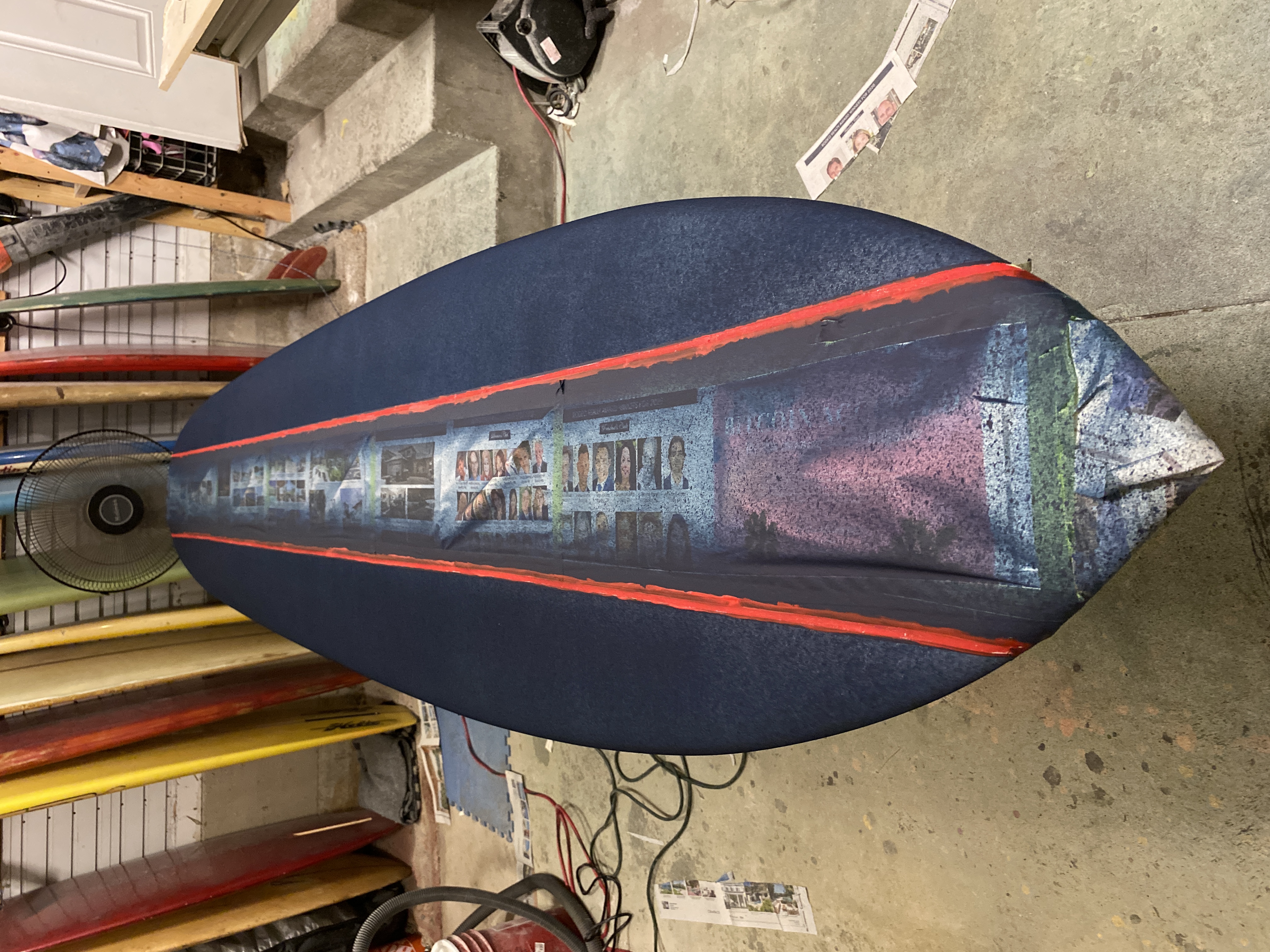 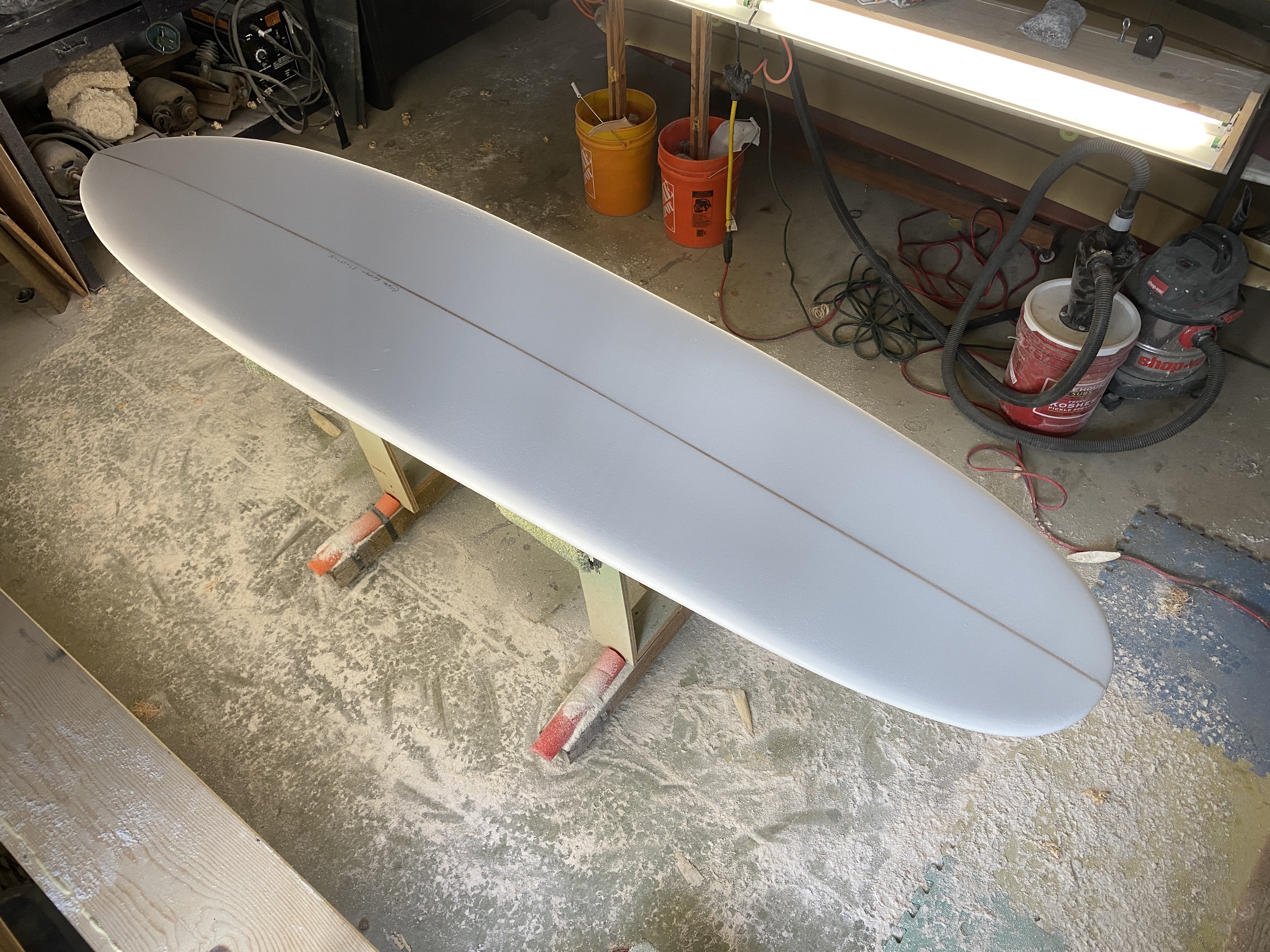 That's a good looking board.  It should come around quite nicely.

Sweet sled.  I like the planshape, subtle..... not glaringly piggy like some but defintiely has the elements to it.

Deadshaper, for the life of me I can't figure out where this dab of red paint on the dog's tail came from! :D

A rounded pin in the 8' range, is just about the only thing a D set on the tailblock is fairly effective on.

Thank you all for the feedback!

I got it in the water yesterday, and by chance we had really fun, peaky, mild off/side shore chest high surf all morning so I got to try it on a better than average day at my home break.

I can't claim the template - I used the same template as my previous pig, made from a 9'0 early Weber pig. For this board, I wanted to try and follow the wider nose evolution these boards took, so I pivoted the template at the wide point to bring the nose out as far as it would reasonably fit the flipped 8'9Y blank I was using.

The nose ended up just under 18" - I could hear Bill Thrailkill advising me to "chase the curve, not the number" so I let it fall where it looked good, somewhere between my square's 17 3/4" and 18" measurements, it didnt have a finer measurement than that, and I never bothered to bring a better ruler out later haha.

I also added a faint hint of concave through the first couple feet of the board, and reserved some extra foam up there in advance so the concave didnt take away too much volume.

The rails are a pretty forgiving, not fat, but not pinched A rounded more modern feeling rail without the tucked edge underneath. No edge sharpness in the rail front to back.

The very last 2-3" flip of the tail does reach a higher sounding 4.5", but the realistic curve of the back 18" of the board put the actual functional tail rocker at around 3.75". The board isn't squirrely, in fact it's less so than my previous pig, something I am curious about as I was worried I'd ruined the the board when I measured that. The curve looked nice to the rest of the bottom and I was afraid messing with it would cause more problems than it would solve, and with that monster D fin on there I figured "too loose" was an unlikely problem on this one haha.

The board was easy and intuitive to ride. It likes to get in early and stay high, with a quick early pivot on takeoff to a high line. Accelleration is noticeable once I get over the concave, not before.

That is a noticeable ride difference from the earlier green 9'0 pig I posted. On that first pig - narrrow early template nose, slight flattish roll through board, very little nose volume, it likes to get in, quick mid face flip to a high line, then two steps or so to the middle of the board for a very noticeable mid board trim acceleration. Noseriding is a challenge on it for me, at 6'1, 195 41, and not a pro :) - however the board is very responsive and maneuverable, totally out of character with what I'd expected from writeups about big, heavy hard to turn pigs.

This board is much more balanced. Much more stable and easy to walk the board, more balance and natural feeling foil for paddling, with a compromise in the maneuverability off the tail. It feels more cruisey and traditional where the first board feels lively and eager to leap up steep faces.

I am curious about the fin differences. I used the same template, but this time had more traditional 1/2" wood on hand and had a more traditional, larger 1/2" glass halo around the wood. The previous pig I made a heavily foiled 3/4" fin with only a 1/4" halo. The rest was ground down in final foiling.

This board off the tail feels less loose than the earlier pig, and on one wave as I kicked out of a steep shorebrealy backside closeout, I could feel that buzzing cavitation feeling as opposed to the green boards usual smooth cadillac glidey turn. The fin looks to be an exact 90 degree installation and straigjt with the stringer. By comparison, the green board off the tail feels more at home to a shortboarder. Quick to turn, happy to punch through the lip to kick out late on a closeout where I've greedily stayed in too long. I am considering grinding my halo on the new board down to that same 1/4" to reduce the surface area, but I'm curious if it's the fin difference, or maybe the wider nose taking some curve out of the hips, or both, or something else.

Anyway, thank you for your input as I stab around in the shaping darkness. The learning curve is steep and a lot of fun! I can feel how gradually it becomes second nature to connect riding characteristics with the contours you put in the board as it is happening. Very cool.