Cut Lap disaster! Can anyone help?

Hi everyone, some suggestions how I might be able to fix this would be really appreciated. This is my first board, it’s a polyurethane blank and polyester resin. I’m trying to do a resin tint cut lap. The whole process has gone really great so far - until today! So doing my bottom lamination, which was 1 layer of 6oz cloth, I made two critical mistakes. One - not working quick enough... Two, I neglected to fully saturate the laps before I attempted to tuck them up. The resin started kicking sooner than I expected and the whole board seems almost irretrievably screwed right now. To add to the mess I then stupidly made up some more resin and tried to carry on laminating the laps, but most of it just ended up on the floor or ruining the bottom which itself wasn’t too bad at that point. I have probably 30 percent of the laps properly laminated to the foam; the rest was stuck up but gelled and had to be cut off(a process which used up about 10 razor blades!)and there are also areas where there is cloth with no resin at all. Added to that I have damaged some of the exposed foam on the deck side!! I’ve spent so long on this so I really don’t want to throw the board away. My only thought to fix it is to wait till the resin is totally hardened and try and sand everything as flush to foam as possible (somehow not damaging the exposed blank on the deck side), then hope that the two layers of cloth that are going on the deck lamination will cover up this mess. Again it’s my First board so I couldnt expect it to be perfect but any suggestions as to how I might proceed from here would be really welcome. Would add that wow, the YouTube videos I’ve been watching make laminating look easy! It it’s certainly not!! And you really have to work fast! Lots of learning done today! Thanks so much, Ben 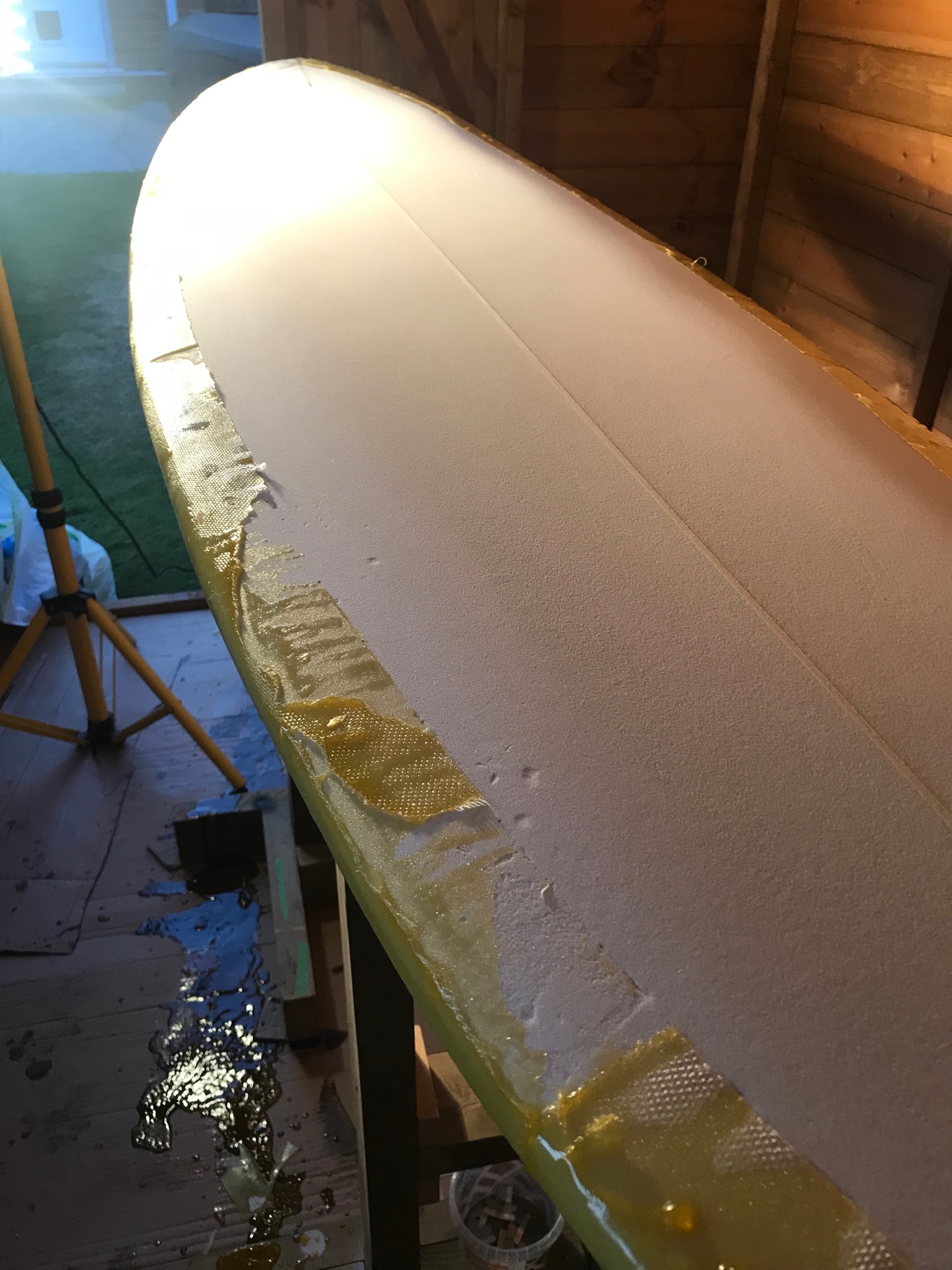 Temperature and working conditions are an issue with these resins.   If your space was warm when you were laminating then that shortens the working life of the resin.   The pros who are doing 10-minute sides in those Youtube vids had to work their way up to that level of speed and efficiency.  By contrast, when you're first starting out with laminating, plan on it taking 30 or 45 minutes per side.  Even longer, sometimes.     That means reducing the amount of catalyst you're using so as to extend the potlife of the resin and give you more time to get your lamination clean.

The other thing you can do when you're starting out is to divide your laminating resin into 2 parts.   We try to discourage new builders from attempting resin tints and opaques until you learn how to laminate, but if you are going to use pigment or tint then mix that in first before you divide the resin up (so your color and saturation will remain consistent).   Catalyze one part and use that do do one side of the board.   .  Then catalyze the other half to do the other side.  Now you're not fighting the potlife of your resin.  Pour the resin out from end to end so that you won't have to move so much of it around at once.  When resin puddles in large amounts it gets hot (exotherm) and catalyzes faster - you don't want that.

If that were my board, then how I'd handle what you've got is I would cut the deck side of the laps off.   Your rails appear to be a bit square in shape so you've got heavy saturation on the rails themselves.  You can run a line of tape along the inboard side of the corners of those rails just like when you taped off your lapline.  Then take a dremel (or similar) with a cutting wheel and follow the tape line.  Use two hands to control the tool and just kiss the area you're trying to cut.   You don't want to cut all the way through, but if you do it's no big deal.     Once you get that line to eggshell thickness you can finish your cuts with a razor blade.   Then you can go back to your original lap line, slip your razor blade under the edge of the laps and work them loose off the foam.   Take your time.    The laps will separate from the foam.

After that, you can build up any low spots with filler and bring those repair areas flush with the deck.   I recommend you work in small batches with the filler.   Mix, fill some holes then babysit them until they set up hard enough to grate off but not entirely hard.   You don't want to try to do all the fills at once unless there are only a handful to begin with.

From there, you can run a foam tint to (better) even out the color on the deck, and laminate after that.  A foam tint is just a thin coat of colored resin applied directly to the foam and will act as a sealer or cheater coat prior to lamination, so that the resin from the lam won't drain into the foam.  Foam tints with a clear lam over them look a lot like a resin tinted lam except that they don't show the texture of the weave.

FYI, narrower laps are a lot easier to wet out and wrap.  They're not as strong and stylish as a fat lap, but they're easier for a new builder to pull off.

One other thing:  the pic you posted appears to show that your stringer is standing a bit tall.   If so then as the cloth wraps over that countour it actually becomes a weak spot and will lead to cracking and leaking and delams.   You want to take a sharp handplane and bring those stringers down flush with the foam.   Worst case if you can't get it clean with a hand plane would be to use your power planer set at a super shallow depth to do it.

Ben Eighty Six
Last seen: 1 month 6 hours ago
Joined: 08/22/2021
Hi and thanks a lot for your comment - really appreciate the time you have taken here. My thermometer said it was 25 degrees Celsius, I catalysed 900ml of resin at 1%, so 9ml MEKP and the pigment was also at 1% (I added pigment first...) That is interesting what you are saying about extending the cure times. So I could catalyse at maybe 0.5 or even 0.25 percent and it would still cure eventually? I thought that 1% was like the minimum that would work so this is welcome news. I don’t care how long it takes to cure but I certainly need more working time! Also, I guess this means you should get all the resin out the pot as quick as possible as there must be a lot of heat buildup in the pot itself? The laps are 2 inches from the outline - yeah will try narrower ones next time for sure. Probably 1 1/4”. Yep and stringer noted, thanks. I’m gonna see how it goes tomorrow but this board may well end up on the scrapheap, it will probably be less work to start again from scratch! Thanks again for your help :)
like
0
Top
Sun, 2021-08-22 23:51
(Reply to #4) #5

Oh also what sort of filler do you mean in your suggestion above?

No matter what else you do, finish the board off and surf it.  Endeavor to learn every lesson that your build and you're surfing that shape can provide to you.   The entire experience counts toward your progression.

One of those lessons that you'll get (if you haven't figured this out yet) is that imperfect boards are usually still a lot of fun, and will show you different ways to surf a wave.    A board doesn't even have to be "good" to be fun, let alone "retail grade".

For filler, I have used cabosil but have gone over to using glass beads for having the different texture.    But someone else posted an interesting alternative a couple weeks back (I forget what it was) that comes out with a consistency closer to PU foam.  Maybe someone else will post that up.

Ben Eighty Six
Last seen: 1 month 6 hours ago
Joined: 08/22/2021
Hmmmmmm, yes you are right, darnit, it needs to be finished! I was really looking forward to cutting it up into pieces with a jigsaw tomorrow but you’ve just saved it from surfboard heaven. It’s the right thing to do. Thanks again for your advice/counselling it’s very much appreciated!
like
1
Top
Mon, 2021-08-23 02:43
(Reply to #7) #8

Ben Eighty Six wrote:
...I was really looking forward to cutting it up into pieces...

Gdaddy, you're a saint. Great advice.

I wouldn't know where to start.  Gdaddy has given you hopeful advice.  Somewhere, sometime, everybody's done one they're not proud of.  I used to recommend a first board be a clear "free-lap" done with UV Polyester Resin.  The problem is most people would not take my advice. Some were lucky.  Some wound up in your situation.  Grind that crap off, spackle the divots in the foam, glass the deck and ride it.  Lesson learned.

It's been a long time since I glassed a board in anything other than epoxy, but prior to that I glassed many boards using the UV Vinylester.   Back before the less expensive surf epoxies came out, using VE was a good alternative to PE.