I really appreciated all of your help when I was first starting. I am on board 9 now and the people are clamoring for all kinds of weird stuff I have never done. I have basically ridden short boards my whole life but someone wants me to make them a long board.

The person obviously sucks at surfing and just wants something to learn on.

I know basically nothing about longboard shapes. I was thinking something like

Material: PU as its easier to paint. EPS is a nightmare and I hate the pilling

Length: 9'6 feet despite the fact the person is kind of smaller (140lbs and not super tall)

Width: 3 inches thick in the center and 22 inches at the wide point (is this too wide?)

Nose: Was thinking keep the nose pretty wide at about 18 inches or so.

Tail: 16 inches with nothing in the hips at all so that it is just a nice mellow boat type

Rails: Fat Full rails with a little belly vs a full egg rail (could be fun?)

Rocker: Super mellow rocker in both nose and tail: maybe like 3 inches at the nose and 2 inches at the tail or something (who knows ill just eyeball it and see what looks cool)

Thanks for the input: For Color I was gonna try to probably paint the blank like a rainbow which I assume would just be a matter of taping defined lines and painting away. Doesnt seem all that hard and then just glass it clear after my misadventures with colored resin tints.

Learning curve ahead, just like any other type of design.

Work backwards off the rider and their intended conditions.   Male of female?   Teenager or 40yr old adult?   What have they been riding so far?   What conditions so they intend to use the board in?  Etc.

Lol I live for the learning curve

Female adult (33), riding a foamie just prior to this and definitely riding some little tiny stuff out here (3 foot standard, maybe 5 feet when bigger). Partially wants a board that her husband and kids could all use at various junctures (AKA low performance pressure).

I set the expectations very low and more just took it on since I am rapidly running out of boards I can make for myself without going into bankruptcy. More excited about the color stuff and opportunity to try making a long board on this one than anything

Gdaddy asks the right questions but I'll take a stab at general ideas...

I think your basic dimensions are fine but a key thing not mentioned is wide point placement relative to midpoint.  I have found that for general mid range riding, a wide point aft of center combined with a tail rocker boost can increase overall maneuverability.  I'm not talking full pig... just a subtle shift.

There has been some discussion around here in the past in regards to 'loaded dome' and/or 'ball bearing' effect of accelerating the tail rocker and combining with some roll in the bottom. There is little question that too much roll in the tail area bottom will slow the board down but again, some subtle changes in the bottom contour can make quite a difference in rail to rail transitions and overall maneuverability.  On a 9'6" and beginning rider I would think around 4" might be good.  I've measured tail rocker on some boards designed by shapers like Mickey Munoz, Skip Frye and Donald Takayama and have found tail rockers ranging from 3 1/2"- 5" depending on overall length of boards.  More tail rocker boost generally = increased maneuverability with the trade-off being a loss of top end speed. I think it's fun to place a shaped blank on flat ground and step on the tail to see what's going on with rocker.

Rail contours and where you shape the thickest part affects how much rail will dig in.  Combined with wide point aft, moving the thickest part of the rail aft of center can provide a shorter 'wheelbase' if you will.  Again, it's subtle but by grabbing the rail with your hand as a gauge you can figure it out.  Take a look at some longboards and check how the final thickness taper is worked in to the tailblock area.  I see a lot of tail rails nearly 'squared off' these days.

For general purpose/daily rider kind of thing I try to combine outline hips with tail rocker and rail foil to allow for easy turning.  Wide point forward with thinned out rails extending ahead of mid point combined with a flatter tail (edge to edge as well as along stringer) with generally result in a faster stiffer ride... probably not what your friend needs at this stage.

Fin(s) are a separate discussion but in general, a basic 2+1 seems to work for a lot of people.  With a long center box and a couple of different sized center fins you can likely cover a wide range of conditions.  Single fin, 2+1 or small thruster-like center fin with sidebites... all might find a place in a one-board quiver.

Here is a composite photo of a board by Jim Phillips that looks about perfect to my eyes... 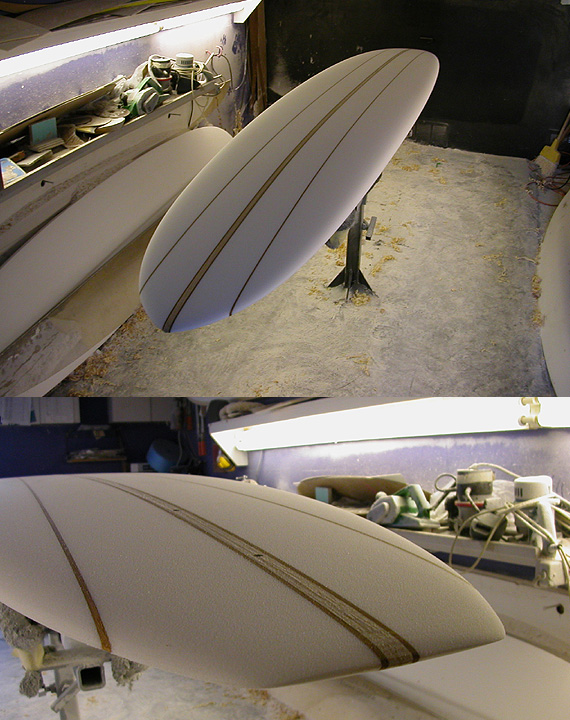 I kind of like your idea of focusing it a bit on being able to turn as that would be best for her at this stage rather than going fast. I think she needs to learn to turn from the tail and I think moving that wide point back a touch might be kind of sick.

So rails wise ill make it slightly chunkier a bit back of center and then taper them as it gets closer to the nose. Any idea how thick the nose should be? I don't want to get too crazy and have a nose thats way too thin. Is 1.5 inches at 12" reasonable or absurd?

I'ma buck the trend on this one and suggest a combination of attributes aimed at the adult novice rider.

Adult learner coming off a foamie says to me that they're still primarily concerned with catching the wave.  Wavecount comes first.      They're not turning a lot, they're not setting a rail, they're not walking the board or any of that.   Paddle straight into the drop and just keep going, fall off the back at the end of the ride.   Stinkbug stance, positioned well ahead of the sweet spot of a fin cluster.   No leverage over the fins to speak of, and only 140# of leverage.   Strictly novice stuff with little expectation of ever getting to an "average" level of skill.

So, there's no point in adding side fins because they're never going to engage them, and more fins = more points and edges to get hurt off of.  Beginner rocker to reduce pearling.   Narrow based single fin (safety fin) set a little more forward so the board can more readily be controlled from the novice stance.  Blunt the tip so it doesn't take an eye out or pierce a wetsuit.  Set the leash plug or drill-through far anough away from the rail so that the rail savers on their leash can do their work.     Relatively narrow tail with a little vee to enable a lightweight to turn the board.  Baby squash tail block with maybe a 14" tail @ 1ft.  Wide point at or a bit forward of center is more forgiving for a novice surfer with less-than-optimal timing and judgement.   Whatever nose width goes with the widepoint and overall width.

Relatively more narrow width and only moderate glassing because a female adult has less arm length and upper body strength to be carrying a longboard for any distance further than 50ft from their parking space.   140# surfer doesn't need much volume to get their float and paddle speed, either.

I'd almost suggest a tripple stringer because novice longboarders are known for driving their boards straight into the bottom or otherwise running people over.

Really, the "longboard" template in Aku or Boardcad wouldn't be a bad starting point.  Maybe retain the nose and tail widths but narrow the overall width a bit; and then fatten the foil at both ends so it isn't so fragile.   The board won't be fast or exciting to ride, but it will have enough rocker to take the drama out of the pop-up and it'll be easy for a liteweight to control.

This is more in line with what I was originally thinking. I agree with you. Should just be able to go straight and give the feeling of surfing with some slight ability to progress at a later point but never really ripping. I think being able to start to turn from the back is the most I would expect her to do within 1-2 years although she is pretty athletic.

What we're talking about isn't a versatile design by any means.   More proficient riders will probably hate it even if they don't understand board design enough to realize why it's such a dog.   It's not something you'd find on the retail racks of your local SuperSurferMegaMart.

If/when your rider progresses to the point where this board is holding they/them back then you move on to the next step of their progression with another board.  More boards = fewer compromises in each.

If your rider or one of their friends is artistic then have them do some posca art on the board to make it more custom.

Here is what Im gonna do.

Im gonna make the gdaddy board for her and then at the same time im gonna make the little piglett for myself on those tiny days when the twin fin isnt working and well compare and contrast the two.

No, you're gonna make 2 fundito boards based on whatever you think will hit your goals.   That's what built-not-bought is all about.   Someone else may chime in here with other considerations which may resonate with you, so just be patient and let all the info soak in before you commit to any particular combo of design elements.

John Mellor knows what he's talking abvout and his suggestions are another example that would work.  And (unlike what I'm talking about) that design would be a lot more versatile across a wider range of rider ability and local conditions.   I'd surf that board.   You should definitely plan on doing something like that at some point, whether sooner or later.

I just surfed the twin fin fish for the last 5 weeks and that thing is the best board I ever owned. Its so much better riding your own stuff. Also, so much less worried about dinging it haha!!!

PS...  Nose/tail thickness at 12" mark might be around 1 1/2"-1 3/4" or so.  A 'piglet' trick might be to shift thick point a little aft of center. Consider where she is likely to be standing and build around that.