I've been working on a 6'4'' Fish, made from router cuts in cardboard that Mike Sheldrake, the inventor of this board design creates in his garage.  This board is unique in the way its designed, its core materials, and that it is being built in the Marshall Islands.  Ive had the board kit for over 3 months, waiting on supplies.  Now that they are here I have spent a few solid days getting it to the glassing stage.  A few pictures to show where its headed.

Im not the first person to built this board kit.  One other person, Nick in New South Wales beat me to it. I am impressed.

There is a back story to my kit.  It goes- Nick (the other Nick in New South Wales....doppleganger!), built this same board kit a few months back.  He originally ordered the kit and had it mailed to his apartment complex in AU. It never made it to his doorstep.  It was lost in the mail.  Meanwhile Mike was in his lab, building up another kit for Nick in New South Wales.  He sent it out, and soon enough the original kit landed back at Mikes doorstep.  Mike posted the board on his site, by chance I saw this and bought it.

I began deciding on the supplies I'd need to build this thing.  I ask Mike Sheldrake for a simple shopping list.  Glass and resin was going to be the hardest, most challenging.  I dont have a local board supplier who can ship a few bottles of resin over.  Resin will have to come out by vessel, a barge that travels from Hawaii, to Guam, then to here.  A long 2.5 month trip.  I got the materials a week ago.  Im almost finished.  I start glassing today.  I thought to myself would this be interesting for sways?  I figured my audience would grab a beer and enjoy the experiences that I, a new builder- never shaped a single board would go through.

Sheldrake has explained that these kits are very durable, light weight and can be experimented on.  Its a fairly "new" process, but has been done a few times in the past by others.  Sheldrake has a short history on boards built out of cardboard years ago.  But not well documented, and probably failed to catch on due to the lack of technology available at the time.  Today computers are making that a possibility.  I think Mike Sheldrake also has the patience of a saint.  Building the pieces like a puzzle, hand numbering all of them (HUNDREDS) after they get cut out, making videos and how to guides.  He's got the heart to do it.  I spent less time building up the pieces than it took him cutting them, Im sure.  About 2.5 hours or so to set all the pieces together.  A few minor mistakes along the way, but all in all a simple process, it did require an extra pair of hands.  Thanks to my co-worker Jeff!

To Mr. Sheldrake and all others...I hope I can post more builds from the Islands.  Its extremely difficult to get materials here, which helps me get into a creative mode.  I have a few ideas I will experiment on and eventually surf.  This kit from cardboard makes it possible to ship a board practically anywhere.  A serious plus.  The other easy way is by HWS.  Paul Jensen mailed out a kit and is here, waiting to be built.  Another day.....

To put a spin on the build process I will attempt deliver a build that is very transluscent with the use of glass.  So far these boards are frosty, but light travels through them well.  I think my theory will work. We shall see.

Here's the pics of my build up.  Slowly coming together.   Thanks ;)

I'm using dial-up. So, these shots will take me some time to post.

Heres the box when it arrived.  Wooow!  lol

Here's the board Nick in New South Wales built.

the box containing the fish kit.JPG 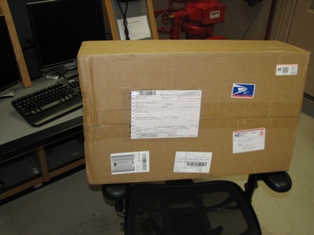 nicks board in new south wales.jpg 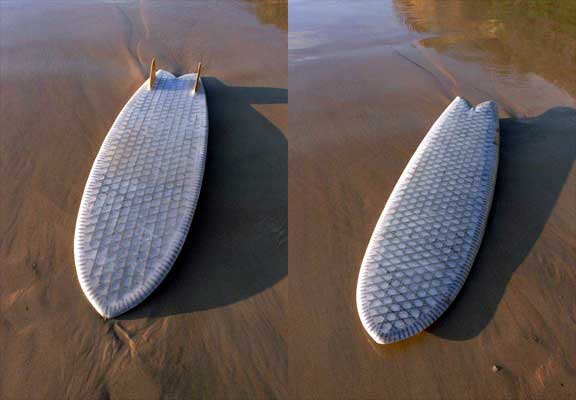 These are the stringers, all 10 of them.  Not yet glued.  I used Loktite brand superglue from the store, and some painters tape.  Thats about all the gluing needed for these boards.

pulled out and tringers lined up.JPG 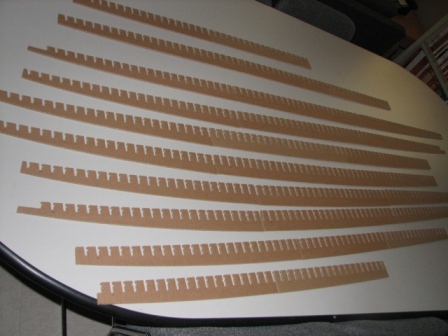 Sheldrake did a great job of numbering the pieces. Once I pulled the cut-outs from the box and glued them, everything else fell into place....well, sort of. 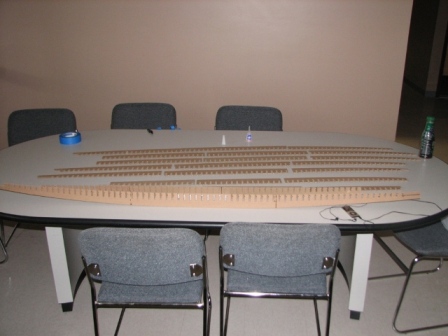 orienting the stringers, with Briley.JPG 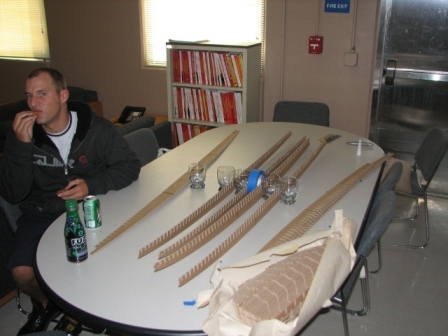 The stringers had key cuts, resembling a skeleton key  down them.  Certain ones had to be lined up with the cross sectioned ribs.  This is how you align everything properly.  Once the grid pattern is layed out you begin to see the Fish come to Shape.

finding the key groves, lining them up with ribs.JPG 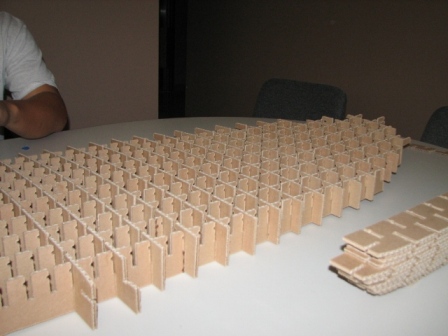 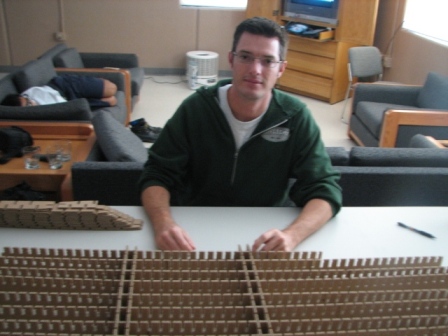 When the cross sectioned ribs were done, this is what I ended up with.  I had to trust the numbers, and go with it.  Even though it looked odd.

I then had to slide the board (right side, the high side) down to even out the fish tails, or butt cracks.

the cantered board, looks funny at first. Later on it makes sense.JPG 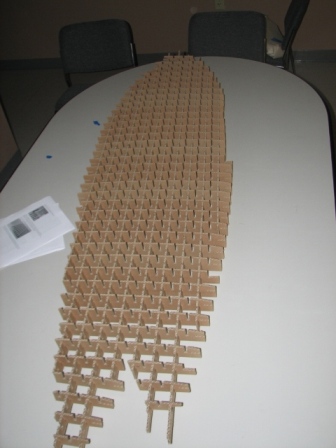 board slides into place by pulling high end downward.JPG 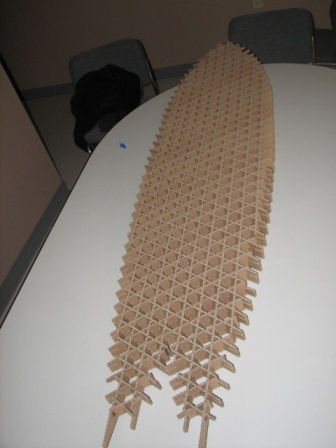 Now to build up the side rails.  This is the unique part o f this board.  It provides little tiny cardboard fingers that hold the glass to form the rail.  Very delicate process, but over all satisfying. 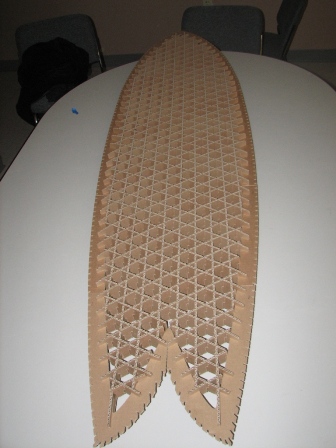 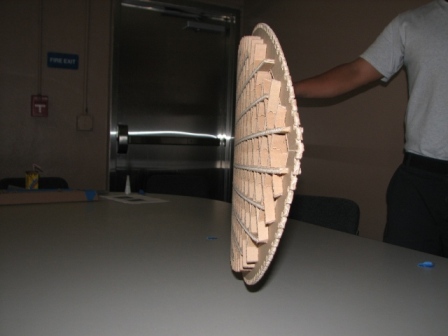 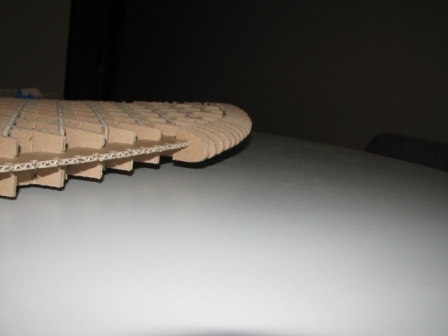 piecing the side rail ribs together.JPG 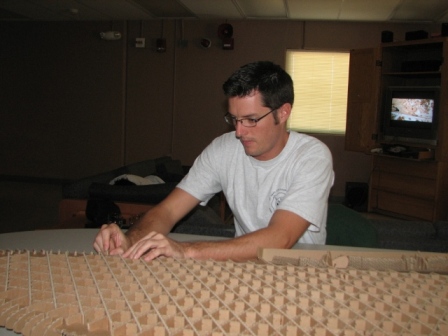 briley holding it on its side.JPG 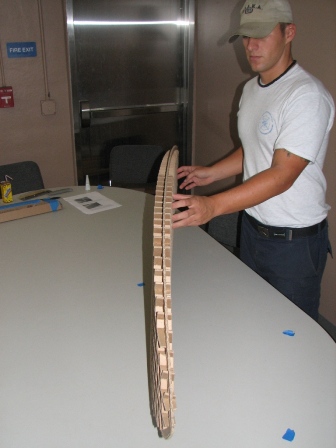 Nick, This is really cool ! beats the crap out of milling coconut wood !!! you were lucky to get one of Mikes kits. That guys got some smarts to figure that out. Since I first saw these boards I have wanted to do them with balsa wood and wood veneer skins. But right now he has nothing avalible. I know what kind of CNC machine he used and I could aford to buy one but would have no idea how to write a program to do what he did. If we could combine my wood working with his computer and CNC skill we could really make magic !!! Oh well, Someday!!! You will have fun with the Paul Jensen board. Some times I miss Kwaj. Such a strange place !!! Do they still have the windsurfing club ? What kind of planes are they flying up to Meck. They were discussing discontinueing the Carbous. Are they still useing the UH-1 chopper?

im sure it is light... but how much does that core weigh?  Please post pics of glassing procedures... extremely curious.

The boards holow core is complete.  Here's a profile shot of the board.  Im holding it up here.  Whats neat, is that this board is very light weight, stirdy, and all the pieces hold quite snug. 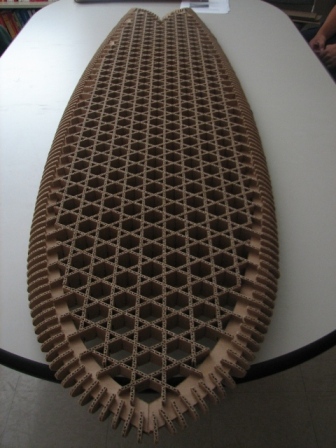 that is one sexy piece of cardboard!.JPG

Next I lay down a coat of RR epoxy, no glass.  I delute the resin with Isopropyl rubbing Alcohol so it soaks into the honeycomb support structure. I want the resin the harden the top surface of the honeycomb structure.   A good tool to use here is a sponge brush, or what I ended up using was a faux sheep skin polish pad for shining shoes.  Kiwi Brand, and only cost about $1.50.  The deluted resin worked well, although I poured enough to apply on 3 other boards all together.

*Notice the dark colored areas on the honeycomb pattern.  Thats where Ive put resin down.  Then notice dry light colored cardboard on the rail pieces.  Those dont have epoxy which I will explain in a later step.

For even more fun, I went to a local shop on Kwajalein where the store owner, known as the Bali Lady, sells goods from her annual trips to Bali.  I found a shell pendent neckelace that looked like it'd be cool to inlayed on the tail of the board.  20 bucks!  Perfect fit too.

bottom epoxied and ready to go.JPG 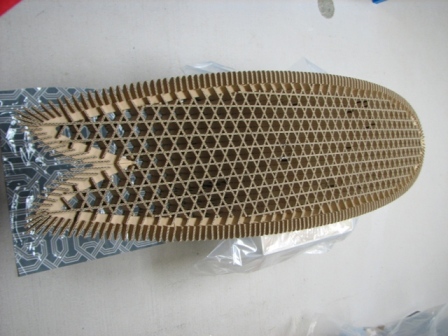 Epoxied the top surfaces of the cardboard. Top of Deck and Bottom of Deck.JPG 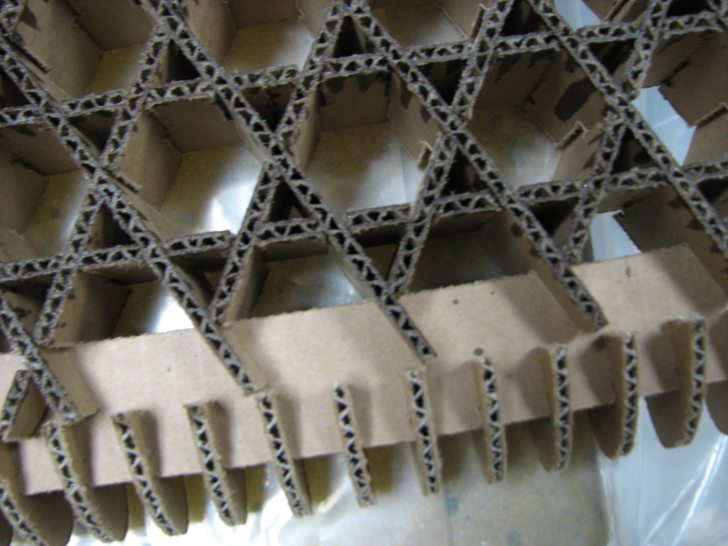 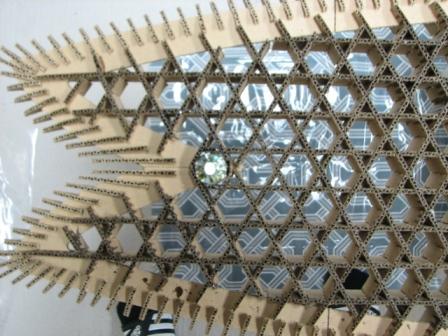