I just received these from our new East Coast rep, Joe Gibula.

I was really impressed with the total package Josh has put together and we will be putting them on the Stoker V Machines to see how they run.

Look great, can't wait............. back with results either here or on the Stoker V Machine thread under the Surfshop category..... 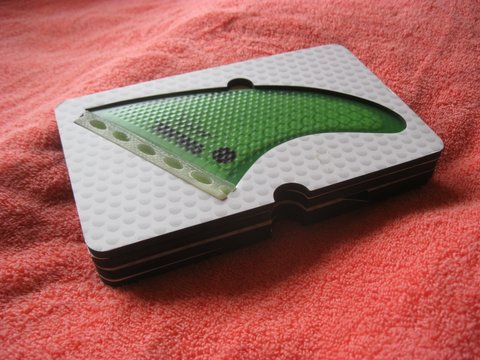 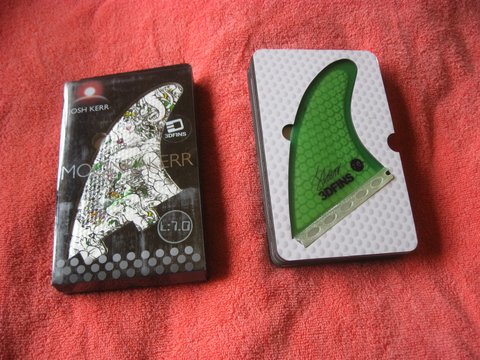 If you want to get deeper into the aerodynamics, there are two types of flow around an object: laminar and turbulent. Laminar flow has less drag, but it is also prone to a phenomenon called "separation." Once separation of a laminar boundary layer occurs, drag rises dramatically because of eddies that form in the gap. Turbulent flow has more drag initially but also better adhesion, and therefore is less prone to separation. Therefore, if the shape of an object is such that separation occurs easily, it is better to turbulate the boundary layer (at the slight cost of increased drag) in order to increase adhesion and reduce eddies (which means a significant reduction in drag). Dimples on golf balls turbulate the boundary layer. 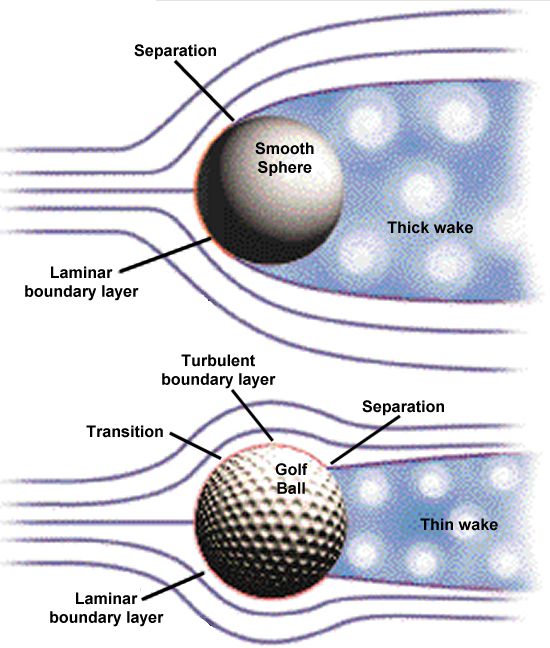 everysurfer
Last seen: 3 days 4 hours ago
Joined: 09/20/2008
The real reason for dimples is marketing/ something new. Some laminations have dimples because they incorporate a flow medium in a breatherless infusion process. Breather less so you can have a finished skin right out of the bag. Water flow tests have disproved dimples time and time again. Surfboards are not golf balls, water is not air, and surfboards move too slow.
like
0

Many of the principles of hydro and aero dynamics are similar or even the same.

The bottom of a surfboard has a high degree of air and water.

Please provide readers with the time after time tests you cite.

Being a golf ball or a surfboard has nothing to do with it........ the physics are proven and widely accepted.

Velocity also has nothing to do with nullifying the physical principles either. Anything with mass weight and volume are subject to the laws of physics.

Authoritative statements and conclsions should be based on facts, otherwise it's merely speculation. 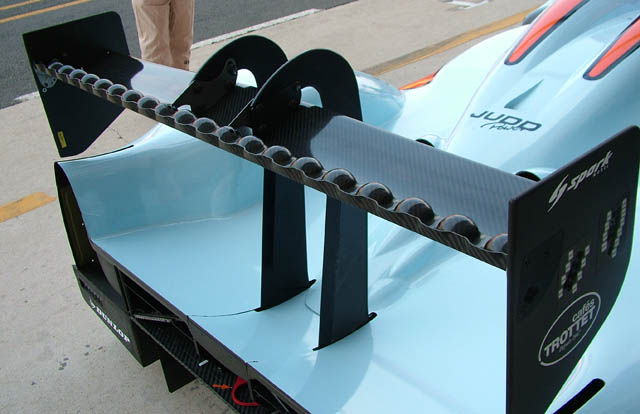 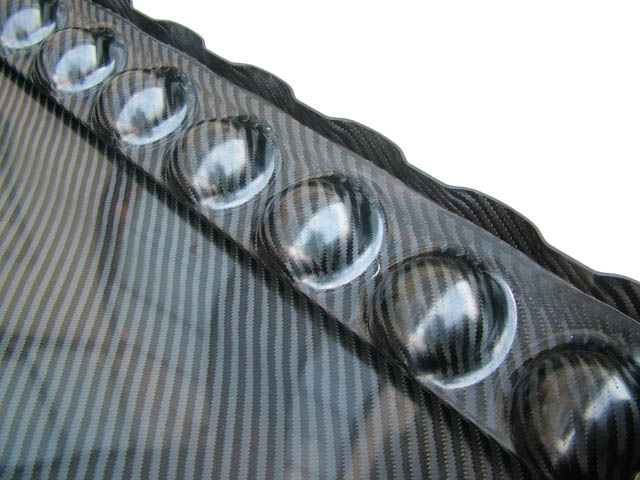 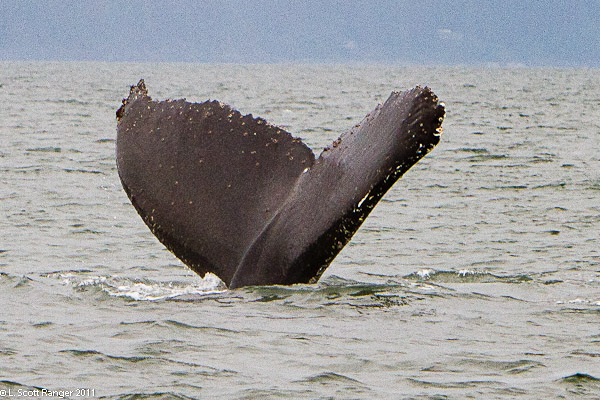 I suppose it could be argued (more for the sake of debate than anything else) that the difference in the shape of a golf ball and a surfboard fin makes Kerr's design having little merit.

I don't think that's the case when you start looking at drag coefficients and subsequent Reynolds Numbers on many different shaped objects. Sure, a more streamlined foil like a surfboard fin, airplane wing or sail might appear to benefit most from laminar flow versus intentional turbulent flow. The use of turbulators initially causes more drag while increasing adhesion, but also reduces eddies, which overall, equates to a significant reduction in drag aka known as the "wake" left behind an object. And yes, the spherical golf ball is more prone to producing eddies particularly when the original balls were smooth. Once the golf balls got sliced, scratched, and other surface damage to them, early day golfers noticed the balls traveled further with less effort;  this revelation led to the modern day use of dimples (aka turbulators) that increased performance and reduces separation during the golf balls travel.  A side effect was also a more stable flight.

The airfoil of a surfboard fin is, significantly different than that of a full sphere, however, even though the Reynolds Number differs singificantly from that of a surfboard fin, that doesn't mean the chord length and overall foil of a surfboard fin can't benefit from turublation of its inherent boundary layer.  One has to keep in mind that surfboards have high degrees of air and water running along the bottom of them and that the angle of attack is seldom (if ever) completely at 90 degrees perpendicularly to the leading edge and chord length of the fin.

Adhesion is important when it comes to a fin being used iin a surfboard or sailboard and other similar equipment.  As velocity increases with an angle of atttack, cavitation becomes more likely, we found this particularly true while riding sailboards.  The disparity of pressure from one side of the fin to another caused separation (cavitation) like air not staying attached to an airplane wing.  Once cavitation occurs,it is very difficult to reattach water or air to the foil thereby maintaining lift.

Through reserach & design, we found several ways to increase adhesion in the aforementioned scenaio. One was to engineer a slot in the forward section of our fins.  The slot allowed some water flow to reach the lighter pressured side of the fin.  Slots helped reduce some of this separation but the advent of a canard/caanard aka "fore fin" worked better.  The smaller leading fin would flex and direct water to the 'shadow' aka lighter pressured side of the fin thereby feeding water along that side of the fin foil equalizing pressure along the chord length of the fins. Fore fins dramatically reduced the extent and frequency of cavitation while windsurfing!

If one studies physicas as I did in college, it's a fascinating subject about how the world works around us. Cars, planes, trains, birds, whales, fish, fotball and tennis balls, kites,  and so many other animate and inanimate objects are expericiencing dynamic forces on an ongoing basis day in and day out. It's what makes our world move in both common and mysterious ways.

There's nothing wrong with marketing, it's merely the wrapping that makes a product that might have merit, a little more appealing to a curious consumer.

is the drag force, which is by definition the force component in the direction of the flow velocity,[6]

is the mass density of the fluid,[7]

is the speed of the object relative to the fluid and

is the reference area. 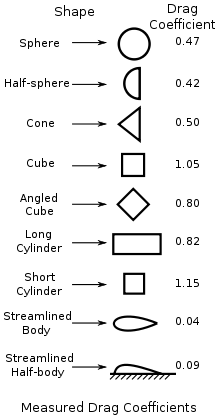 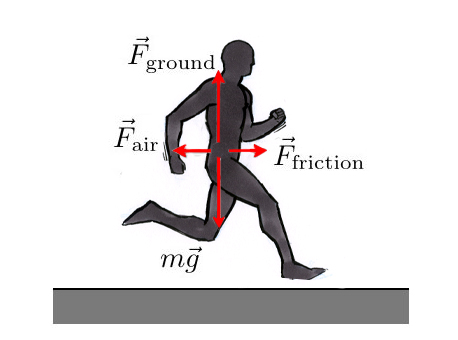 Big reduction in # of steps in process = more efficiency

It's 2014, there's no need to keep building boards the same old way 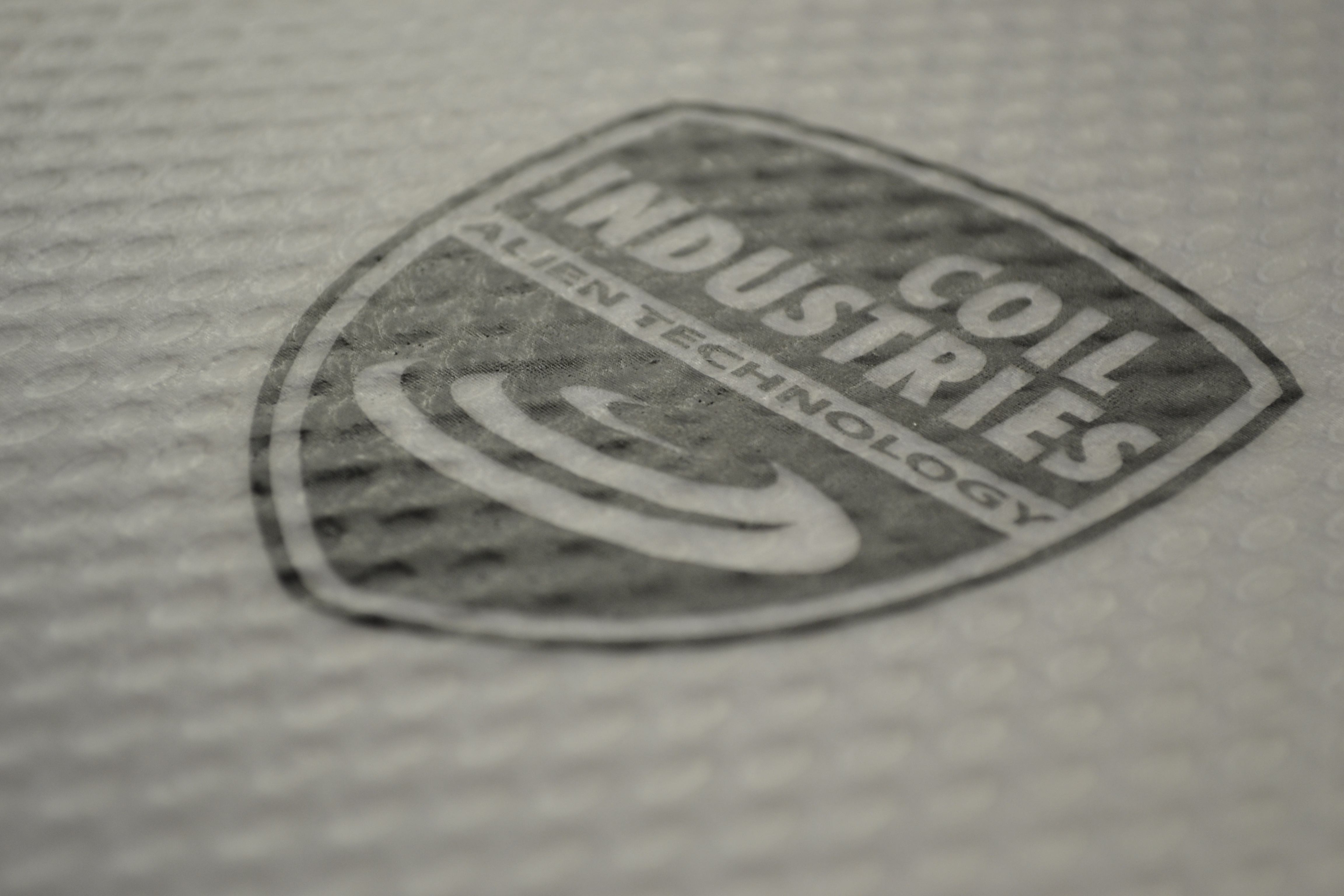 everysurfer
Last seen: 3 days 4 hours ago
Joined: 09/20/2008
Too funny! A josh Kerr fin advertisement, becomes a stoker advertisement, gets hijacked by a Coil advertisement complete with logos.
like
0