Normally, I would consider under 7' too short for me, but I got this stringerless blank free (thank you McDing) it's 6-9 x 24, so I've decided to build a stubby, maybe 6-7 x 23 or thereabouts - because the rocker is not as flat as I'd like for a Simmons type board, or a fish.  I still think I can make this board work for me, my planshape will maximize the foam that's there, its very close to the shape of the blank.

So I'm gonna use a Simmons type outline, but my plan is to go with belly in the nose, flat in the middle, V in the tail, with a thruster fin setup. Pinched rails in the nose, maybe a bevel bottom through the middle, and standard down rails in the tail.  This is all stuff I've used on past boards that have worked well for me, but never on a stubby, and this will have a wider tail than I've ever done before..

I'm not committed to anything definitely, like to hear any suggestions / input you have. Especially on fins / bottom.  I found an old thread where most the stubbies were single fins, that was a surprise, I was thinking the wide tail would lend itself more to a thruster or quad setup, even twin maybe, but with rail fins not a single.  Trying to keep an open mind on this.  Looking through Fowler's F.O.Y. thread in surfshop I notice he is going single fin on some of his wide tail models, with extreme V.

Anyway, tonight I cut it open and added a stringer from a scrap piece of 3/16" plywood I had laying around, and rough-cut the planshape.  Here are some pics. 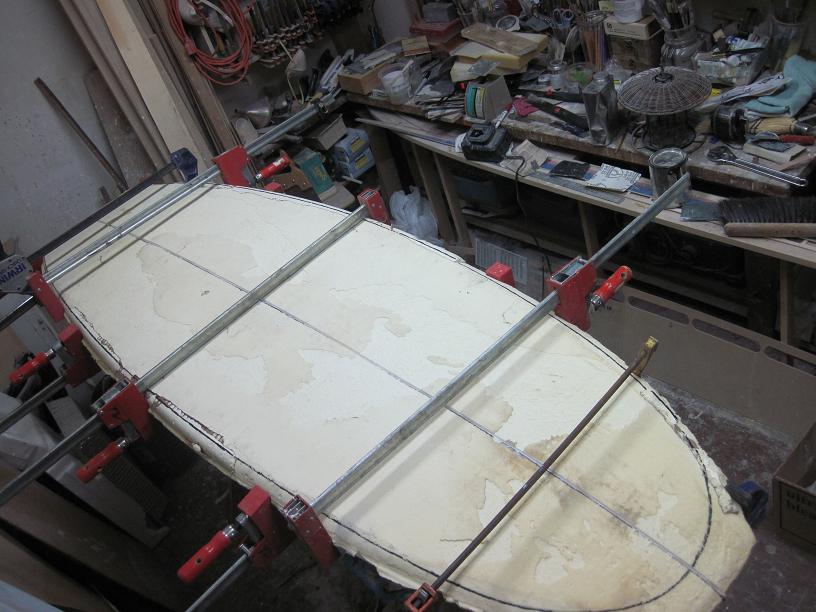 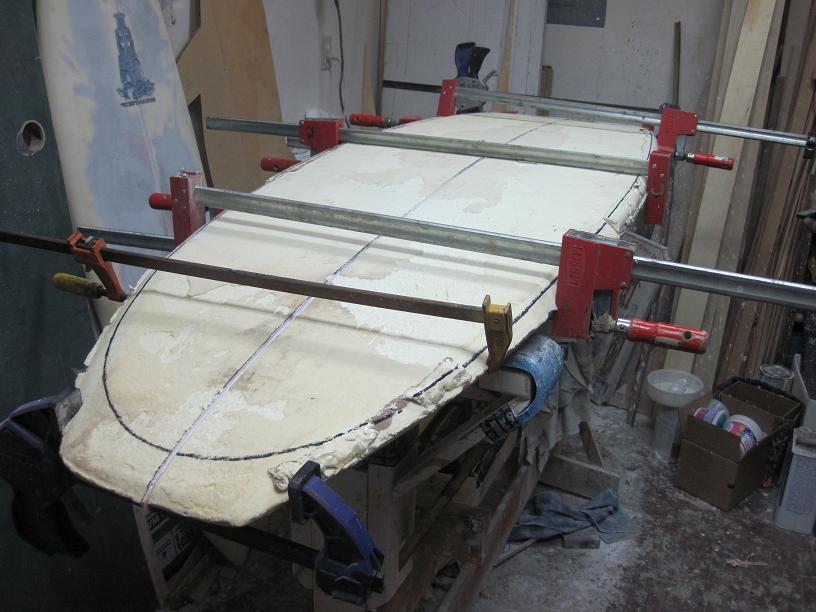 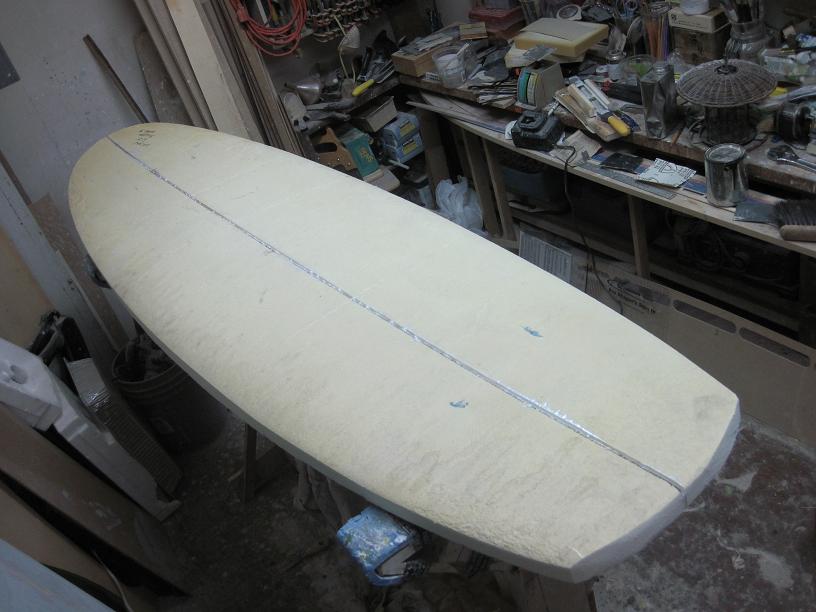 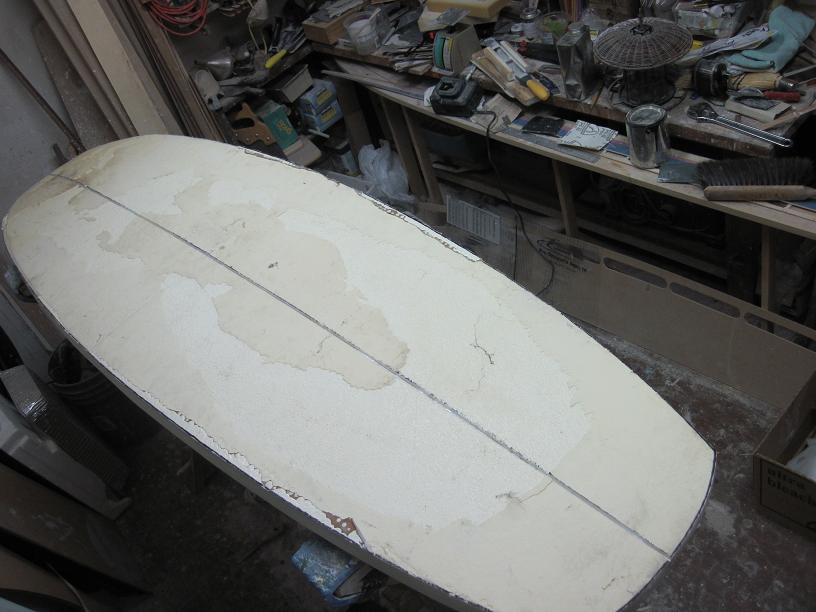 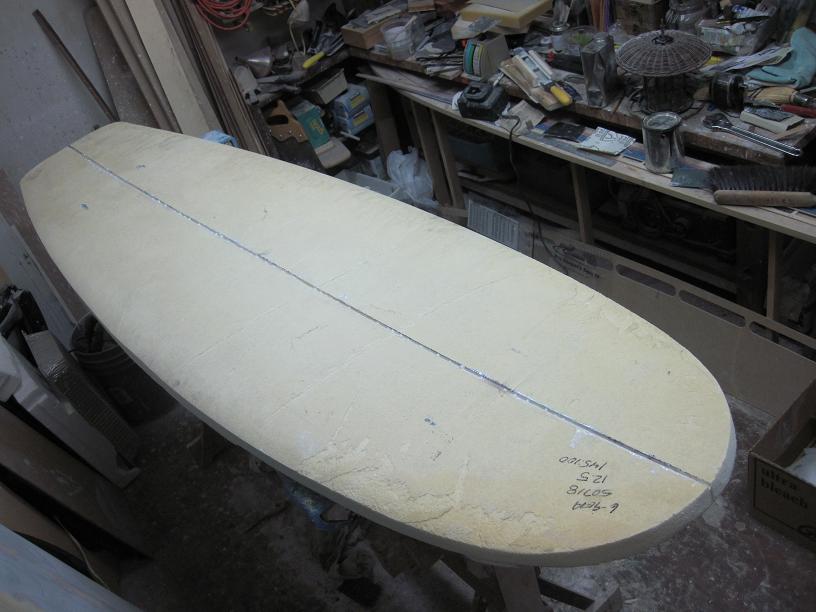 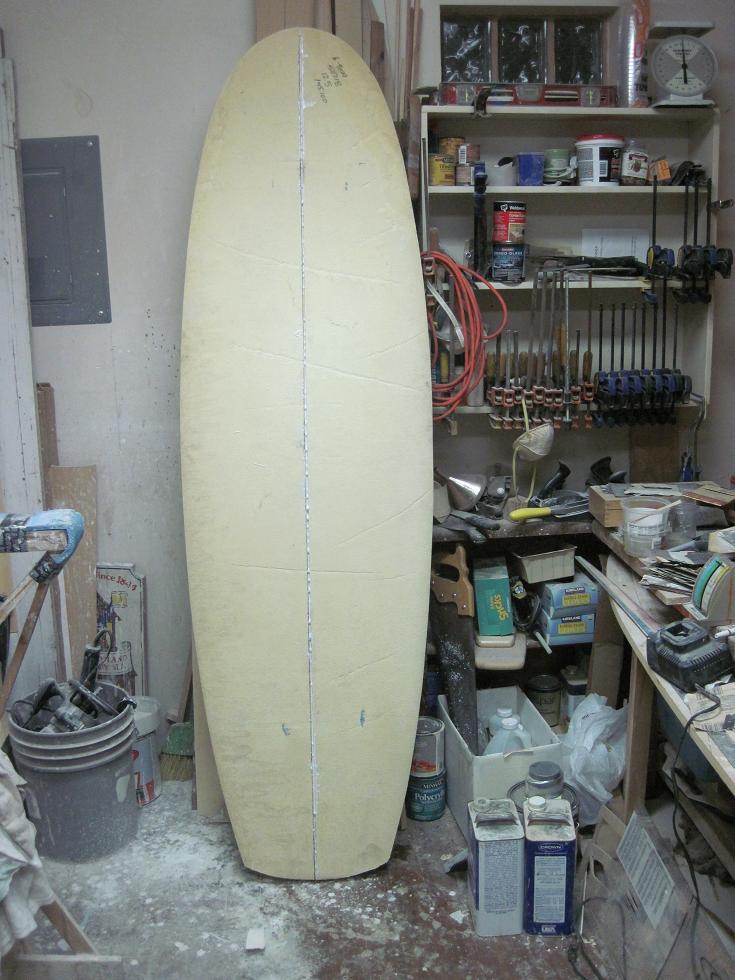 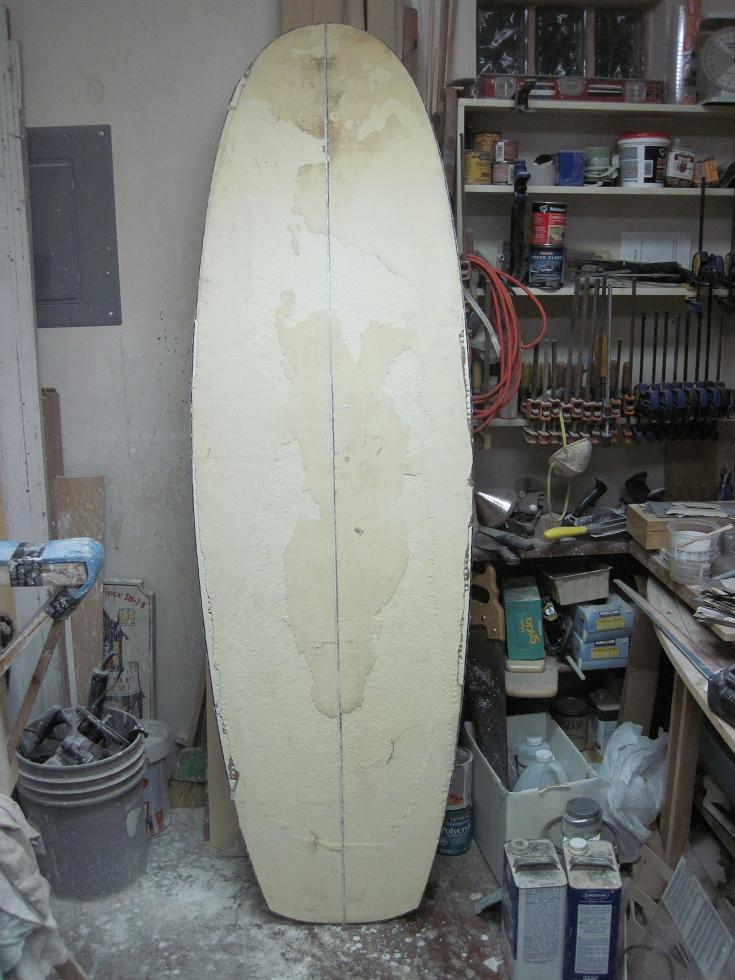 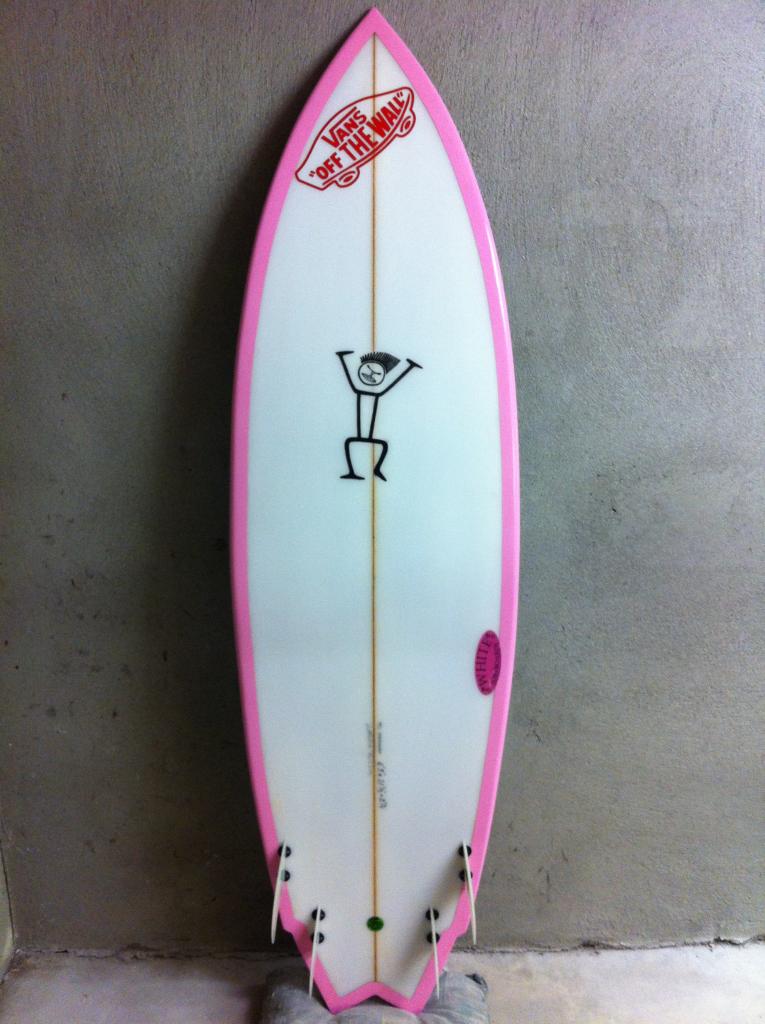 Well Huck this is a query a newbee like myself can answer.

Since your thinking outside the box on a Simmons. How about a double V, with twin fin? I saw a pic from ace and it looks good and he had nothing bad to say(I think he did a single fin). I am toying with the double V & twinner on my sons fish or I may keep it simple and real retro as a twin.

[quote=WhiteSurfBoards]How about a double V, with twin fin? [/quote]

I do not know what a double V is. 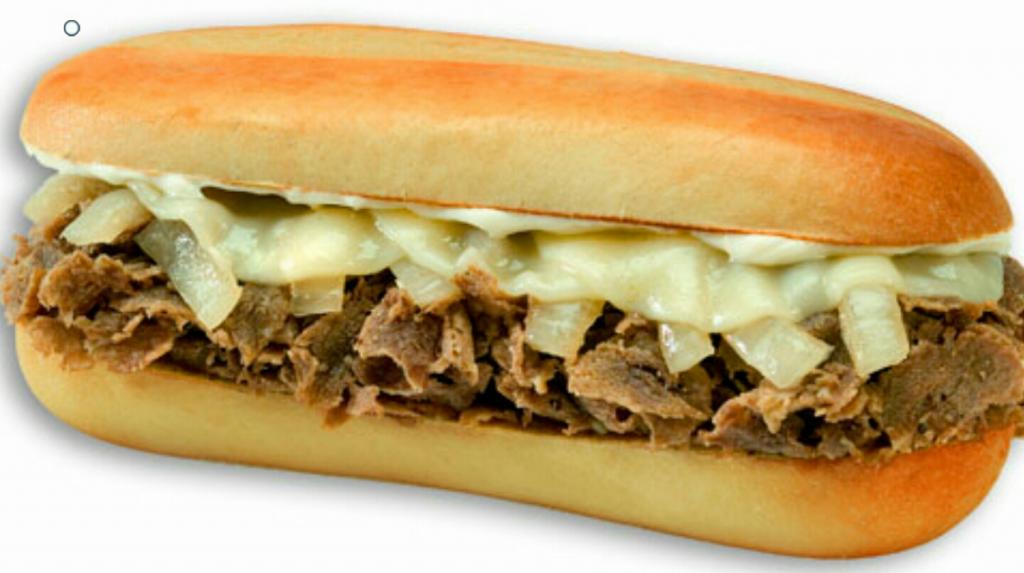 mrdogboy
Last seen: 1 year 1 month ago
Joined: 09/18/2010
How about do a quad set up then a single find box. FCS makes an adaptor that goes in the single box to hold that center thruster fin. Also, you cloud be able to go single with bonzer fins for fun. As for stringer less, do the rails in carbon fiber tape, that will bring the strength back, and give the board some stiffness and longevity. Like the out line now, can I borrow it?
like
0
Top
Tue, 2015-06-02 02:25
(Reply to #4) #5

Thanks mrdogboy - Do you have a recommended quad set and dimensions for install?  Pictures?  Looking for advice.  It has a stringer now!

I am 45, 210 lbs, and have been riding my EVF broomtail (EVF is a vac bagged epoxy glass system) pretty much exclusively lately, its 6'6 x 23 x 3ish... I live in NE florida and we have had a great run of waist to shoulder high surf for a while now and as long as there is any push in the wave this board rides great... I surfed yesterday for about two hours in waist to chest somewhat sloppy surf and this board has me stoked

my research turned up this...

BarrySnyder wrote:
Width can be detrimental for many reasons. When the whole Mini-simms took off and had customer request them, I had to make myself one. Needing to ride every model I shape, I went with the dims and contours of shapers I respected. Concave off the tail, big wide tailblock, flatter deck. Two words, hated it. Could not turn that thing for shit. Now, I'm a big guy, 6'4" 215 lbs. With a size 13 paw. So hard to get up on rail. I then realized why people surf those the way they do. Sold it. Back to the drawing board.

Mini's have a very straight outline, added some curviture. Diamond tail. Shorter rail line. Also squared off the nose. So I incorporated what I know about shortboards. I rode Tri's in the early 80's, wide tails. They had Vee. I also added more tail rocker. Not too much, but more. foiled out the entire tail area thin. I also realized that wide boards and deep concave did'nt turn all that good. So I shallowed the concave in the center, and began to run a wide beveled edge 3.5" or so, from nose to tail. Still kept the standard shortboard tucked edge. What a difference. This board turns on a dime.

This model became my Hitchcock model. One of my best selling boards.

6' Hullygully......I think I have been spending too much time riding mats....Starting to warp my thinking.... 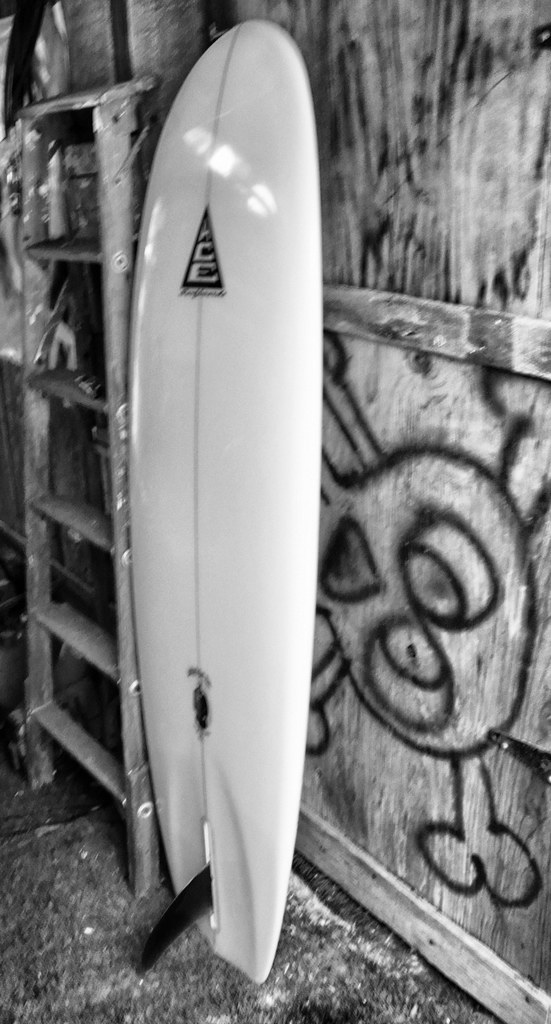 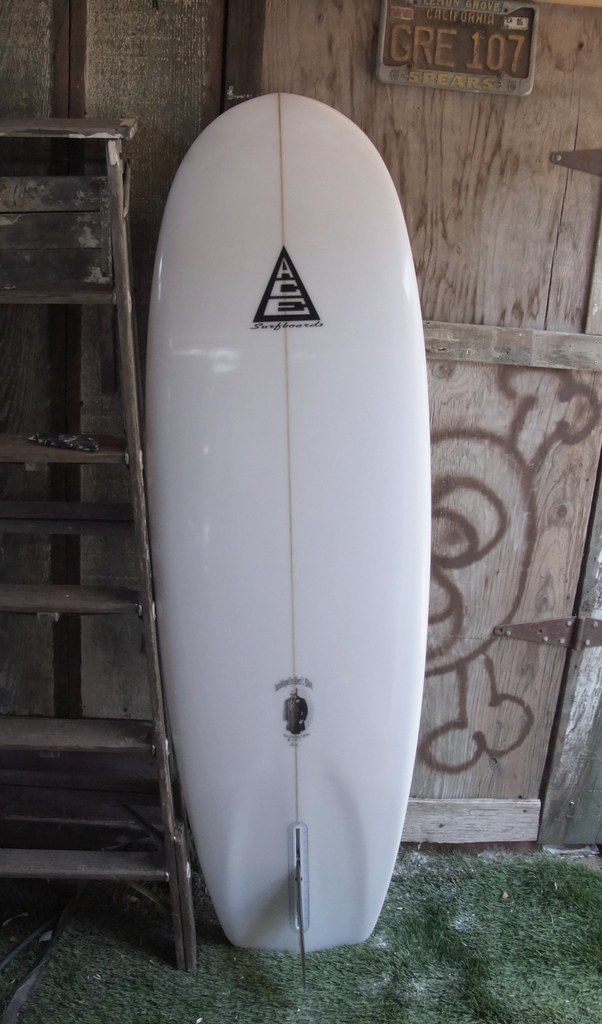 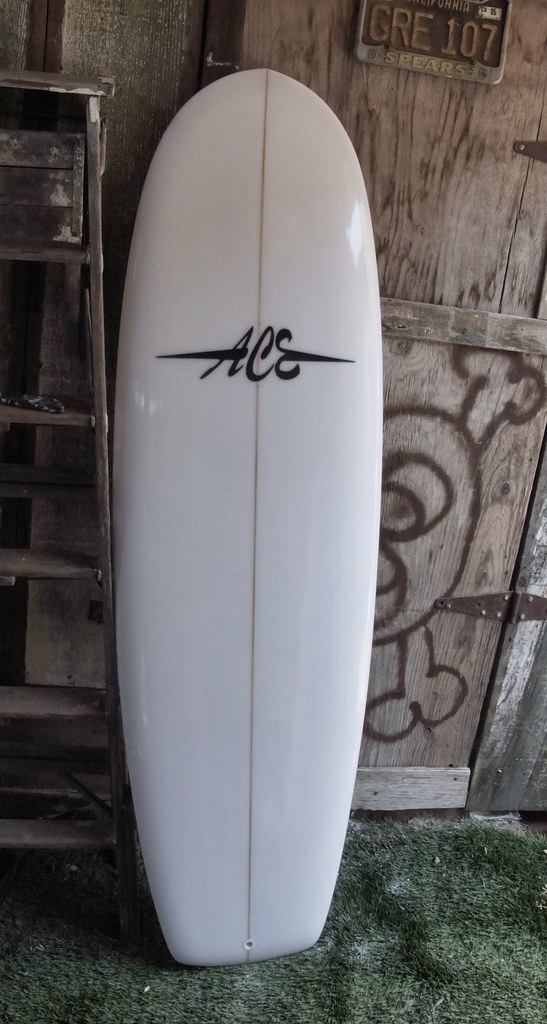 tighter turning, yes, but also a lot more momentum thru your turns, very little to no lag of any kind, almost accelerates imo as you come fully around in your turns, a very strange and exciting sensation 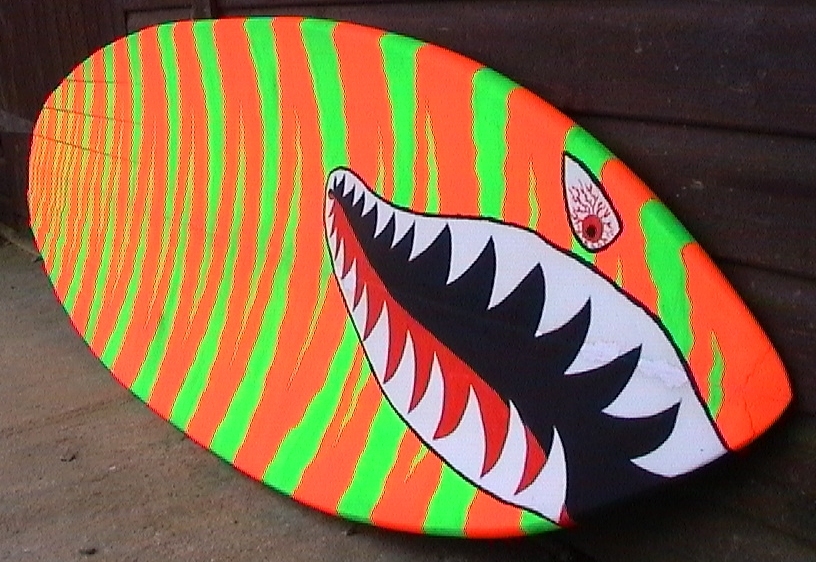 WarrenC wrote:
tighter turning, yes, but also a lot more momentum thru your turns, very little to no lag of any kind, almost accelerates imo as you come fully around in your turns, a very strange and exciting sensation

Or watch the things you gave your life to, broken, And stoop and build ’em up with worn-out tools

gadgetuk wrote:
What thread is this from?

I think it's too much surface area in the tail for a thruster.   I think the Tomo designs that use thrusters work in spite of the surface area because they're so narrow and short their riders can overpower them.   Traditional noseriders use a lot of tail rocker so maybe a bottom and fin combo for those types of turns could work.   Or maybe a twin-biased quad with the cluster moved forward.