But that is why a quiver is best.

It was good today!

Damn the surf reports to Hell!

Just a little to much for this oldman (stand up)

I was kinda thinking a trade off

How much do you wiegh?

Here is the story...

I really want to make a board for myself

something with paddle power

AND, easy to get out.

Just hate having to "abandon ship"

In my heart of hearts

I really want to go single concave with quads.

Here are some shots of the 8-8

one, two and then they pull out,

They can't affort it! 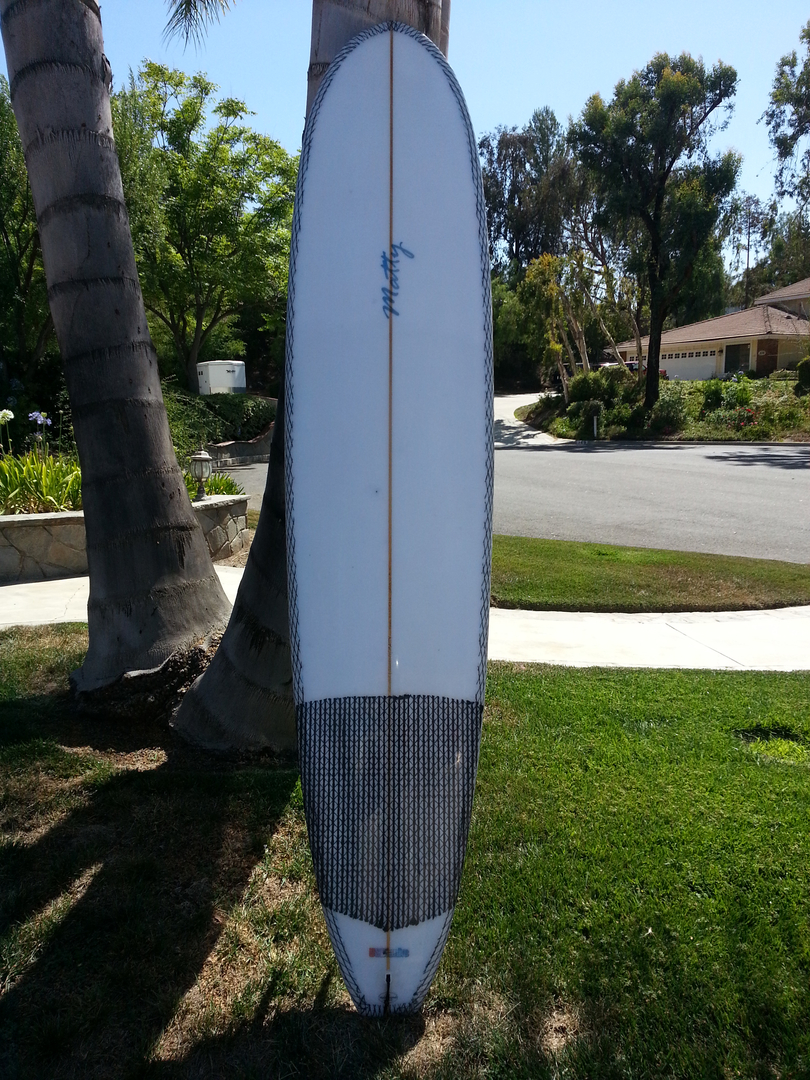 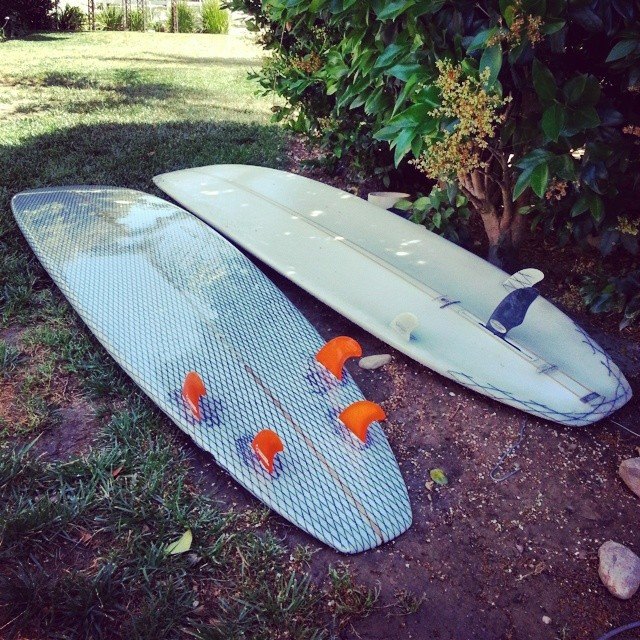 Consider it done!  Want me to add center thruster plug for Dustin?

Consider it done!  Want me to add center thruster plug for Dustin?

I'm inclinded to agree with LTM.

Yes!!!!!!! go thruster....... Or would be interesting to try it  quad with some GL side bites in the rears with a nubster trailer.

Yes FCS fins work with probox plugs. Quad is fine on the 8-8. Will try to get to it this weekend, keep u posted.

Had the WS out in some (small) swell the past 2 days, took it out at the 'bu for a few hours this morning.  I continue to be stoked with it, but I'm thinking a bit less width & thickness, undecided about rocker.  What I have is working good, possibly a tiny bit more than needed, a little less rocker might make the late drops a little trickier, but get me in earlier.  I'll have to compare rockers of the WS and the GS.

Hey Mattwho, guess what?  I didn't remember this, but sure enough the Wing Squad has a single concave (not deep, about 1/8") all the way from nose to fins, and then double concaves in the fin area, with the stringer even with the rails through the fin area.  Down, tucked rails all the way, front to back.

And the Golden Standard has pinched very round rails with a bit of belly in the nose, so I'm not sure if should try to mix them, wondering if I should just stay with the Wing Squad rails / bottom for the next slimmed down Wing Squad, or try for a hybrid.  How would I even do that?  Decisions, decisions.

Hey Mattwho, guess what?  I didn't remember this, but sure enough the Wing Squad has a single concave (not deep, about 1/8") all the way from nose to fins, and then double concaves in the fin area, with the stringer even with the rails through the fin area.  Down, tucked rails all the way, front to back.

BTW it is best not to mix concave with entry surface

as there are some possible "Bogg" on takeoff issues.

Maybe it was buried deep down had me love both the WS and Stubbie.

And the "wing was the thing"

#1 My ride prior to the 2nd coming

Now I am really feeling old as he is the youngest.

He told me that the wing really freed up the edge

and it was easier to bust the fins loose. 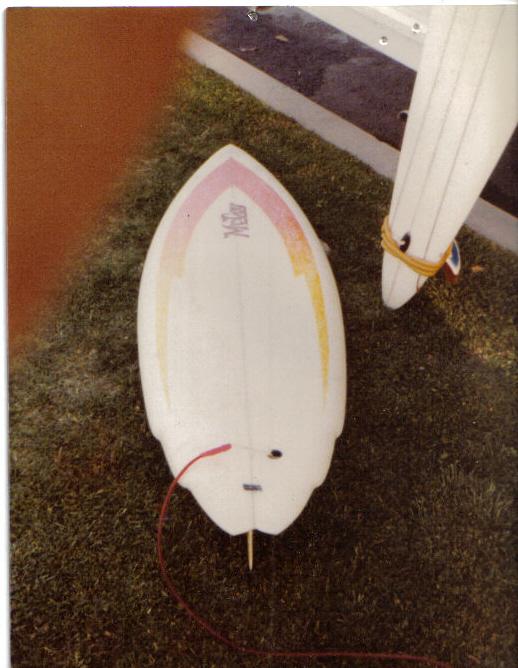 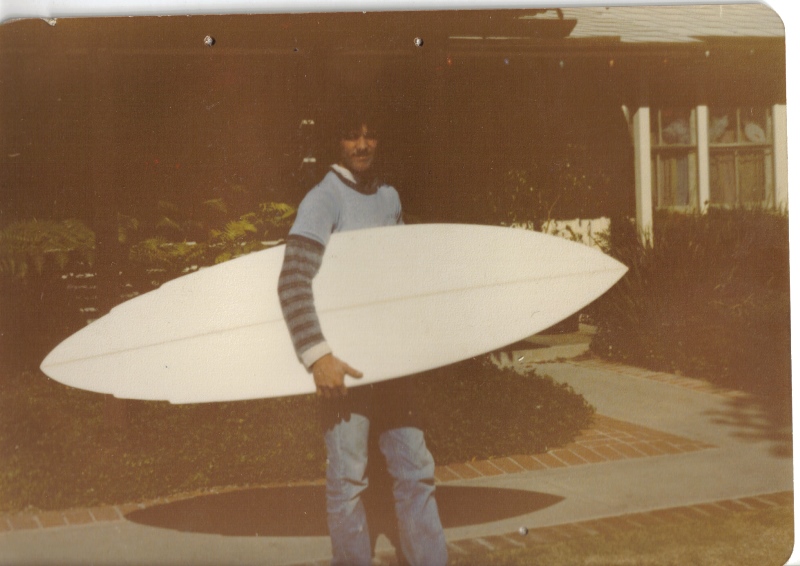 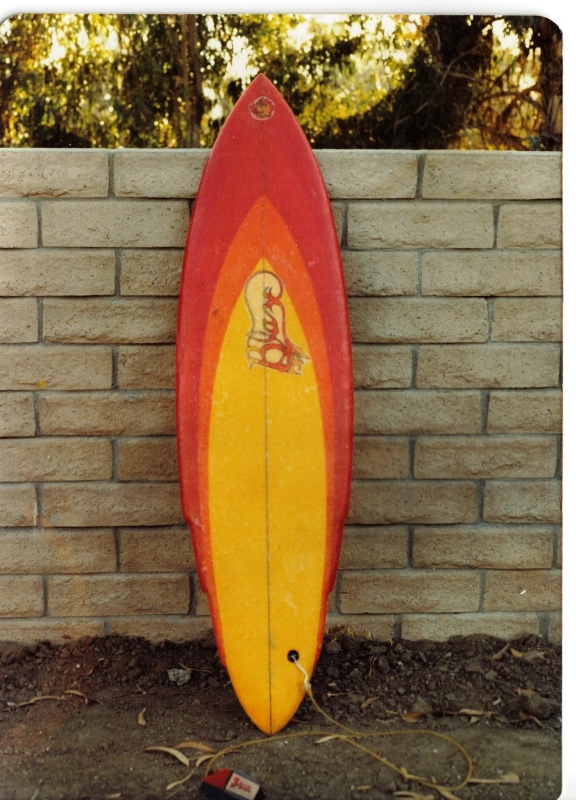 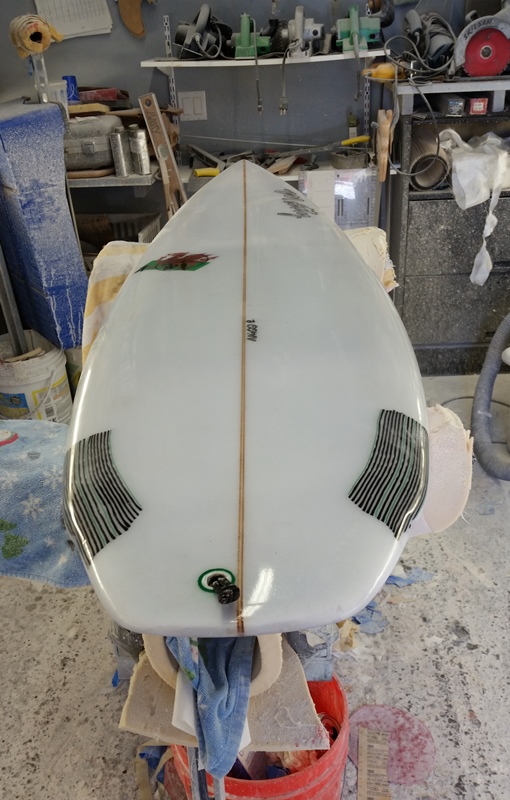 Nice pics! Yes the wings do liven things up, the WS is easier to turn than I thought it would be. That's knocked a few years off my surfing, ha! Took it out at the "secret spot" again this morning, had a great session, but tore two fins out on a wipeout, one of them plug and all! Bummer. But still had a great morning. 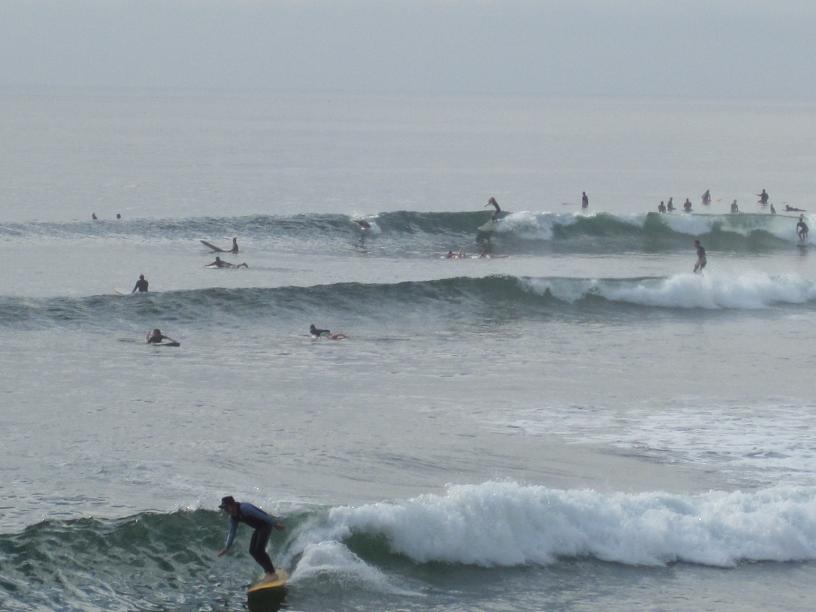 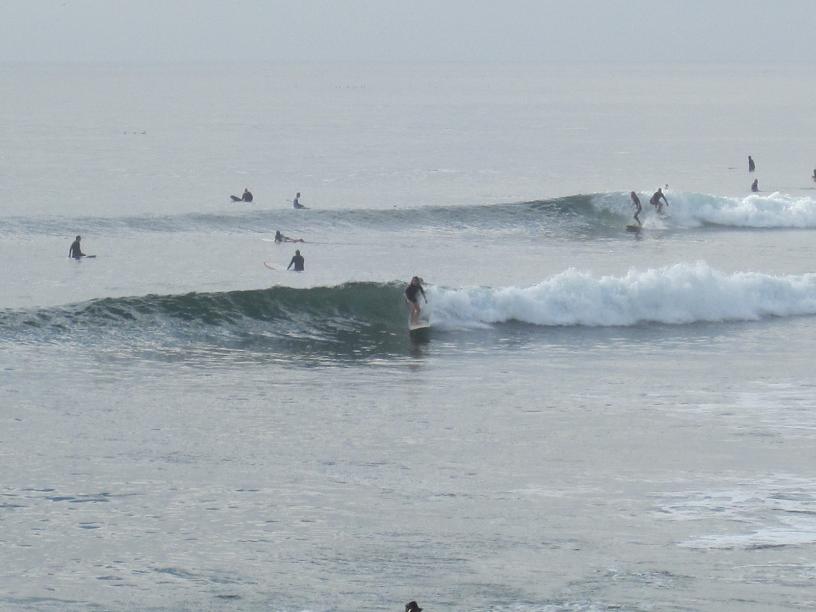 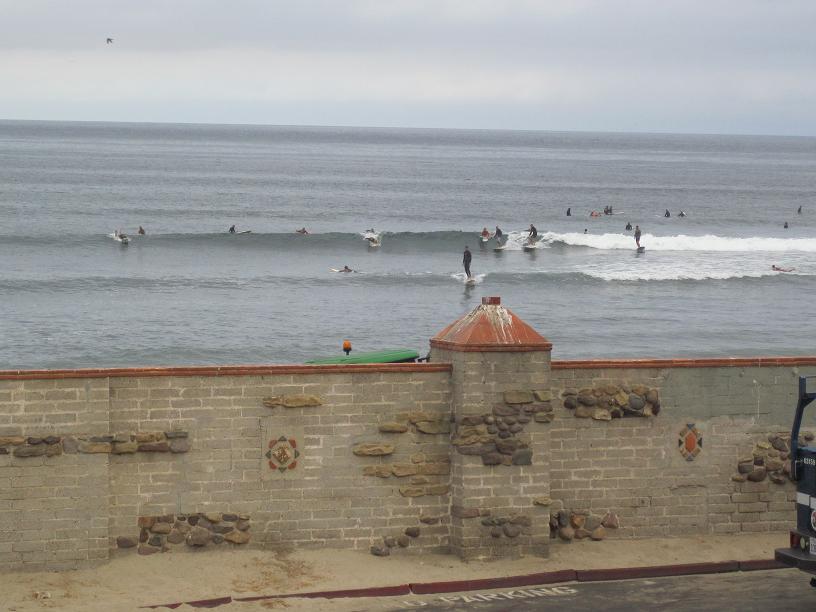 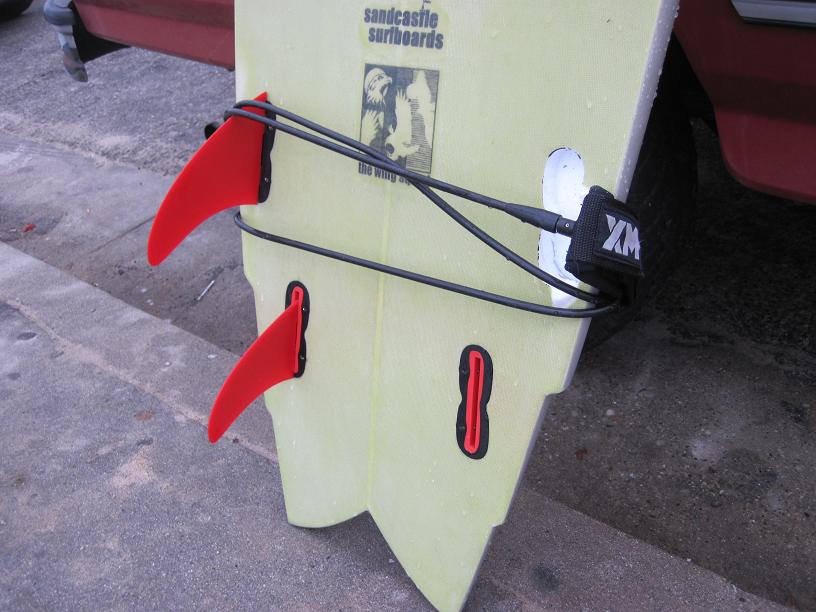 Well, second time in a year I think, dunno if that constitutes a habit, but if not, then I don't plan on making it one, haha.  One fin came out - gone - but the box remained intact, the other took everything.  Which bums me out - $70 Von Sol quad fins, I normally don't splurge like that but several people told me to upgrade from the cheapie composite ones, so I thought I'd give 'em a try.  Really liked the way the board was working, not sure how much of that was the fins, but definitely don't have another $70 to burn right now.

I don't think I added glass in the pocket when I put these in (but I know I definitely did on the stubbie, even have pics of it).  Went back and looked at the build thread on WS, no pics or details of the fin plugs.  But hey, it ripped one fin out without budging the box, and I know I tightened that fin just a few days ago.

Got the wax off and wiped the board down with paint thinner to prep for shop time, I'll see this weekend if I have a spare plug around, otherwise have to order one.  Too bad, I was starting to get this board wired!  Had a blast this morning.  I was having too much fun at the top of 1st point, taking off on a few set waves I knew I couldn't make, and getting just hammered, note to self: I probably shouldn't be doing that.

I have heard that about concave in the nose, but I have also heard of people who put concave in the nose and say it helps get them in early.  Wing Squad I had a little, not much in the nose, but a little, with the hard down rails with a tuck all the way to the nose point.  The board was working well, a good wave catcher, but I'm always on the lookout for anything that would improve paddling / takeoff.  There were a few late takeoffs that I wished I could have gotten in a bit earlier, and thought I should have, but did the concave cause a "bog"??  I don't know, its possible.  What's your thought on softening the rails up front, but keeping the hard down rails with tuck middle to back?  That's kinda where I'm leaning right now.  I'm starting to love this board, but of course, want to improve it!

One thing I have noticed several times on this board, I'll attempt something and think I failed, next thing I know I made it and I'm like whoa, what do I do now, haha!  So I'm still getting familiar with the performance possibilities of this thing, and how to handle it, etc.  Definitely makes it through and around sections I wouldn't on my longer boards, and seems to accelerate quicker at takeoff - my other boards you kinda have to build up speed, this one just goes.  So yeah, I am kinda becoming a concavian! At least open to the possibility it can be used to advantage on the type and size of boards i've been riding. BTW did you notice the French shaper said concave when I asked about high performance longboard :-)