Or it may be the fiberglass fin enema my board tried to give me on one particularly tumultuous wipeout, who knows?

Here's some pics of the two boards I want to blend, sorry for the quality there was some fogginess on the lens I didn't notice until after.  The boards have a lot of similarities, and a lot of differences.  Both in shape and performance.  In other words, switching back and forth between the two, I'm surprised at how similar they paddle and ride, even 'tho there clearly are differences.

So, if I like them both so much, why try to combine the shapes?  Refinement.  Now I have two good boards, I want a great board (isn't that what we're all after?).  The Wing Squad is the more high performance, the Golden Standard is the more old school, but like I say, the difference is not radical.  So I want a board that feels fast and loose like the WS, maybe even a bit moreso, but without all that puffed up volume.  Takes later drops like the WS, but easier to hang on to paddling through breaking waves, like the GS. 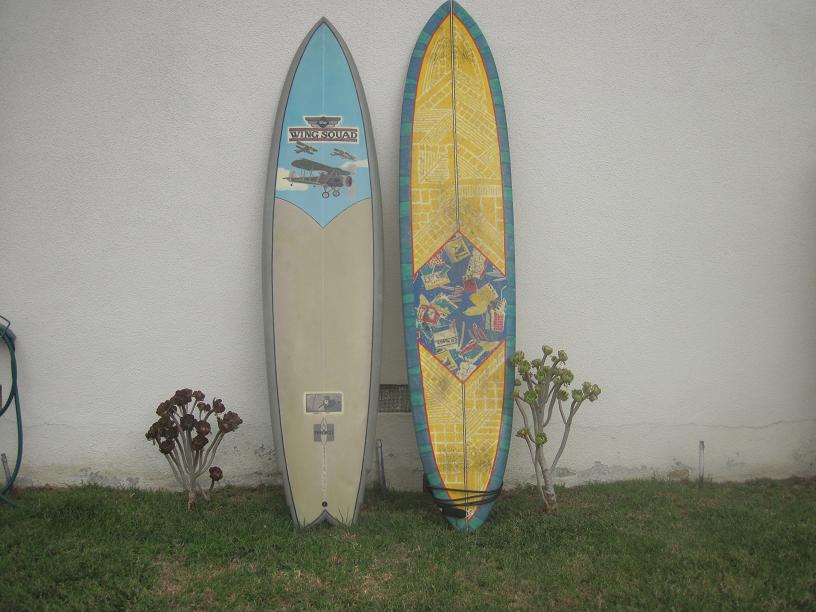 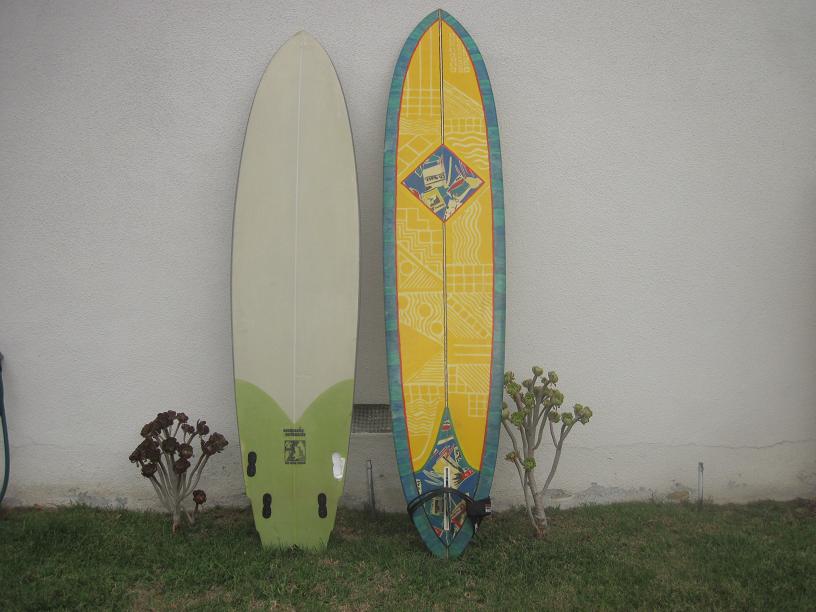 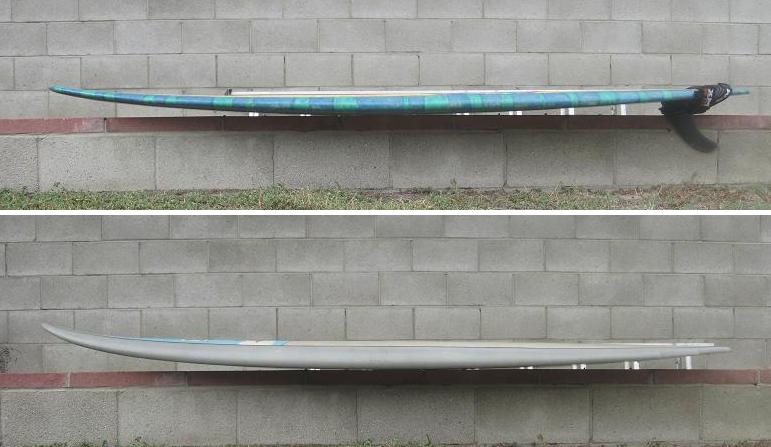 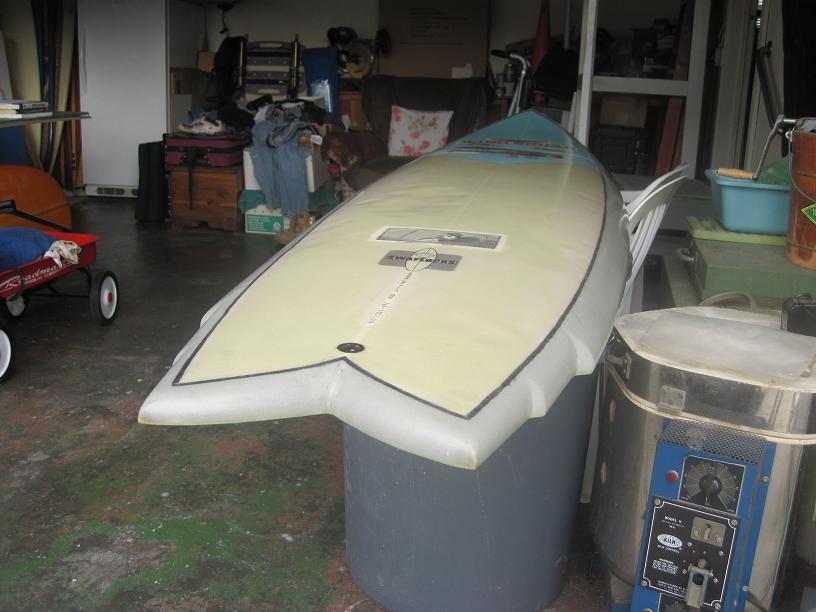 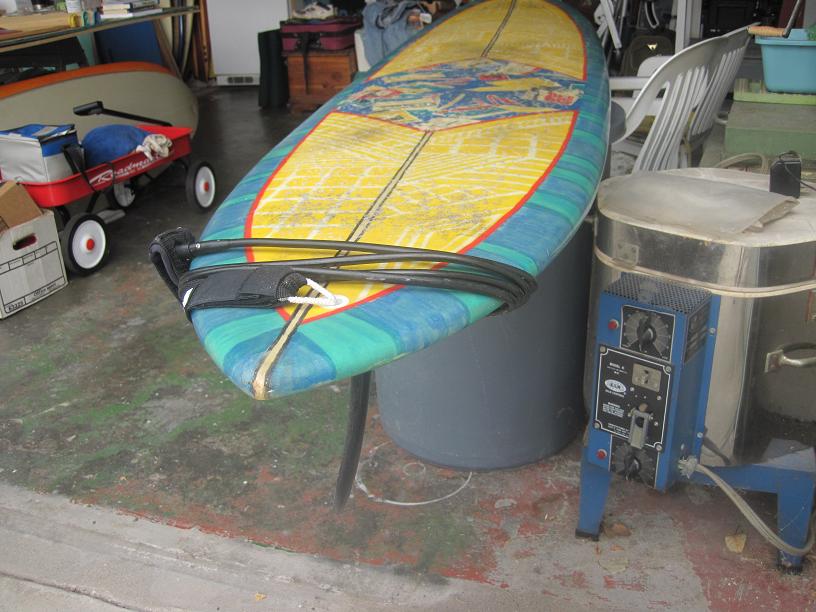 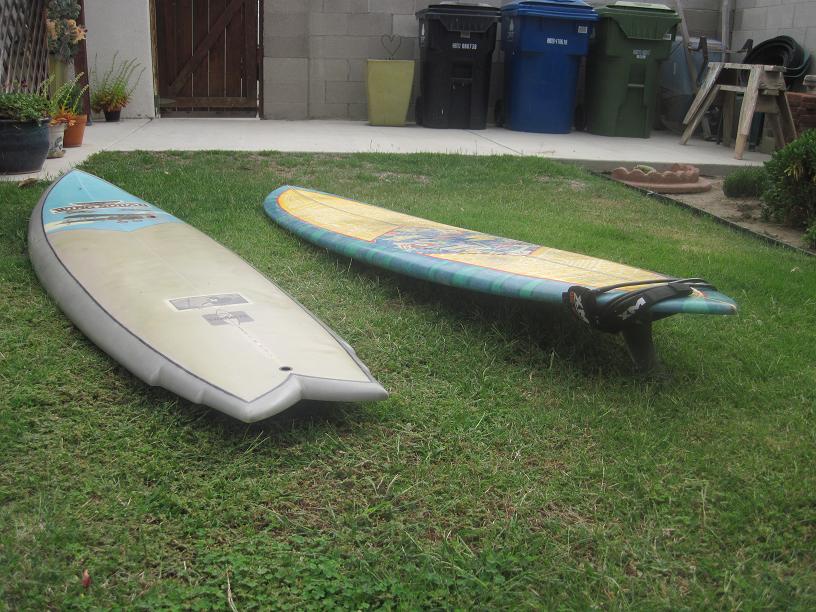 The biggest difference (I can see) is the WS has more nose and tail rocker. 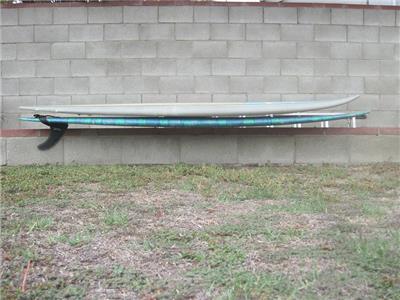 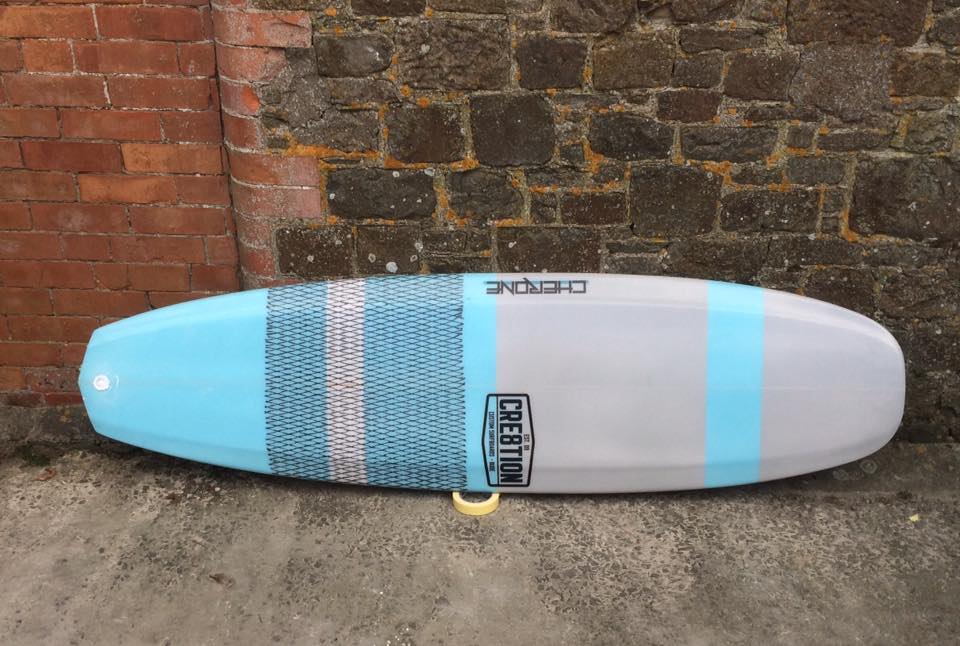 Ya know something amigo...

At least some Stretch ides

are addressing the rail line "bug".

Only in the belly of Sway's 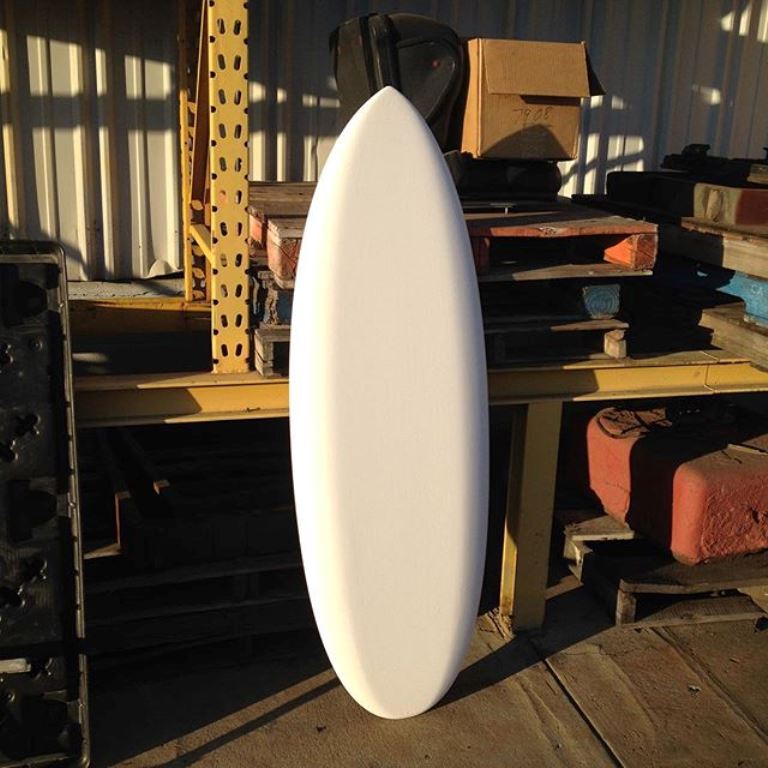 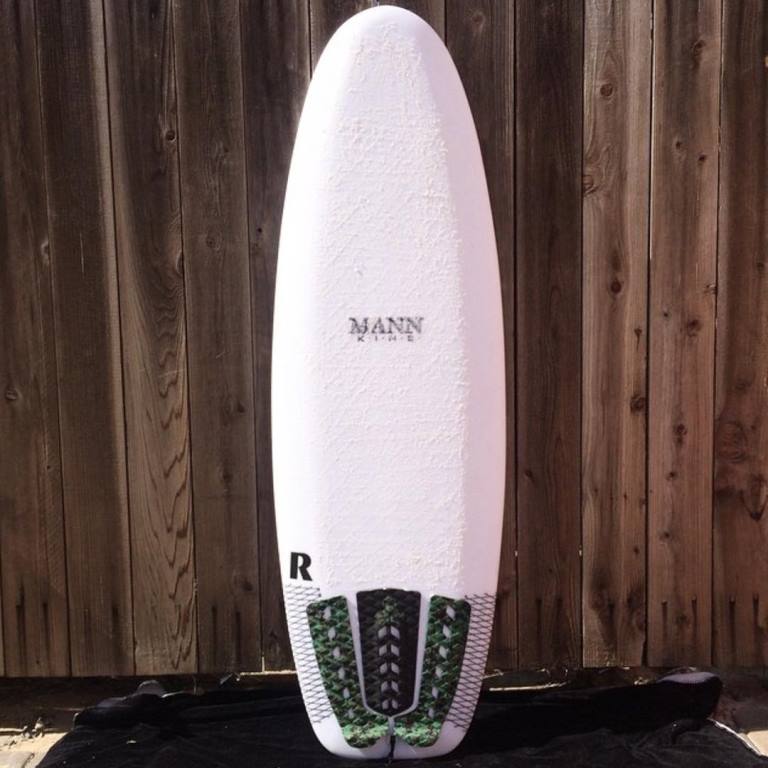 The rocker is probably what's helping me on later takeoffs.  And the flatter rocker of the GS is probably what makes it paddle and catch waves so well.  So maybe try something in between for next one?  I dunno, the rocker is working really well, maybe I shouldn't mess with it.  Man, decisions decisions.

The GS is 8-4, but I really don't like seeing a wide swallowtail on a longboard, so I'm thinking of staying with the same length / template of the WS,  8' x 22 1/4, it looks right without looking like a fish tail on a longboard.  But thinner, lose some of the volume, slightly more relaxed rocker, and drop the concave / hard rails up front.

That cre8tion board is actually not so different from what I did on the WS, I just rounded that bevel at the top and blended it to a bit of a flat-top dome, as it were.

And yes again, volume is the gremlin.  But I'm finding that you can work with volume, the initial reaction is ugh I don't like this, but once you start riding it on a regular basis, you find it doesn't impact the ride as much as you first thought.  But still, its nice to have the comfort of a thinner board, and there is a bit more sensitivity, or "feel" of the wave, than the fatty.  So again, I'm trying for a compromise, keep some of that volume, but not all.

Check out the radical difference in rail profile at the mid point between the two boards! 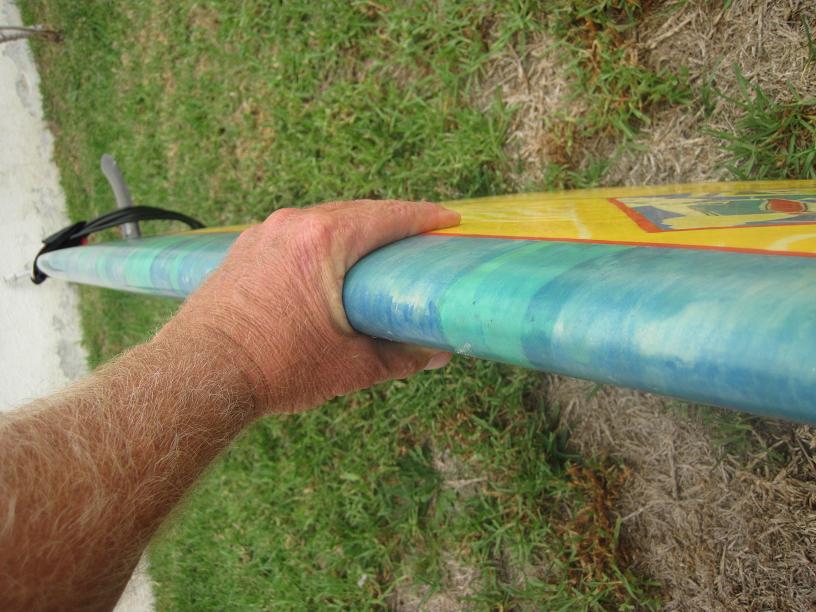 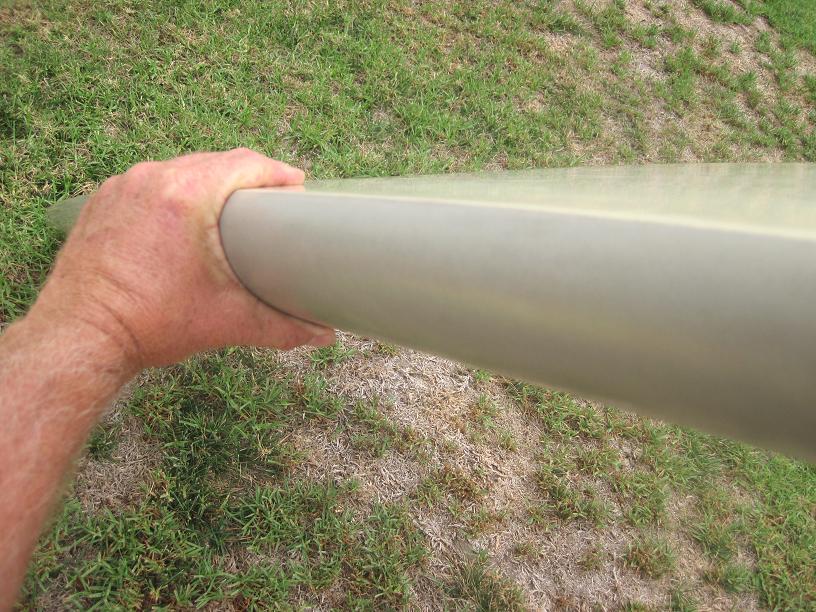 So how long is this longboard?

As it matters, overall

I'm thinking we need to sneak up on the gremlin

with length and width. 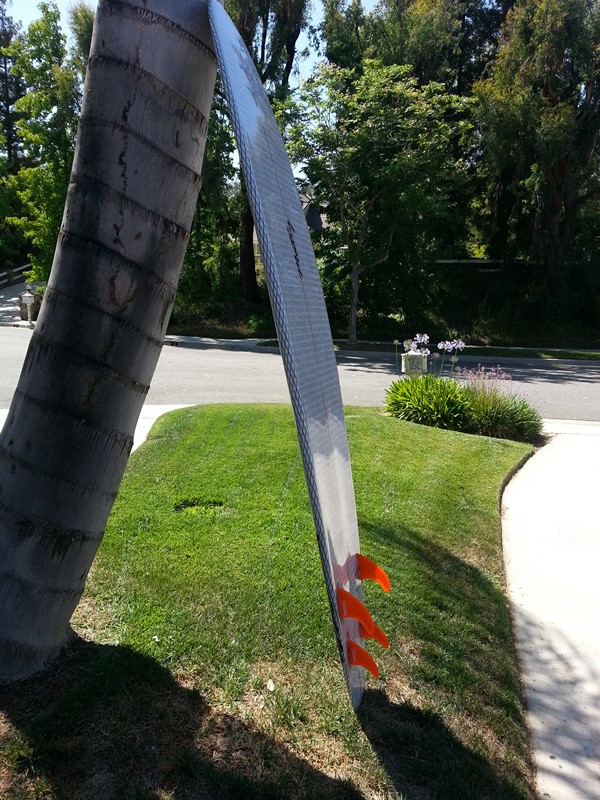 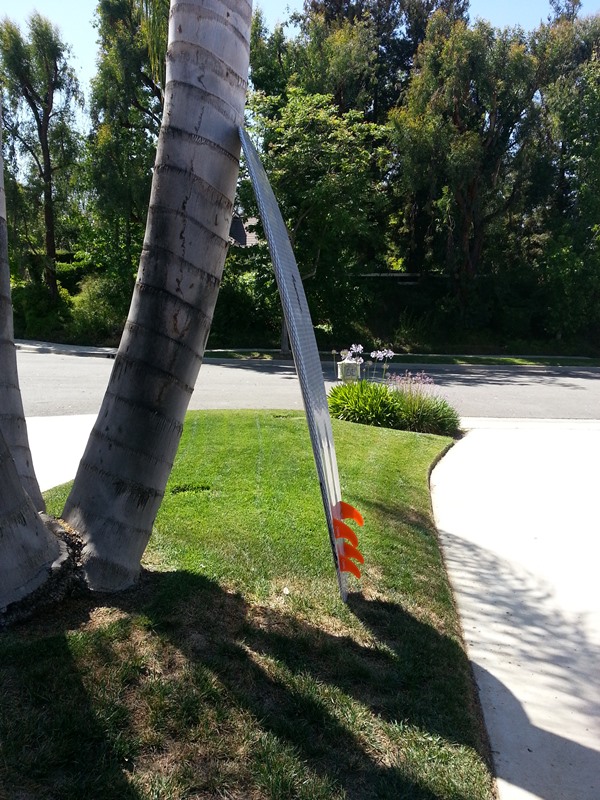 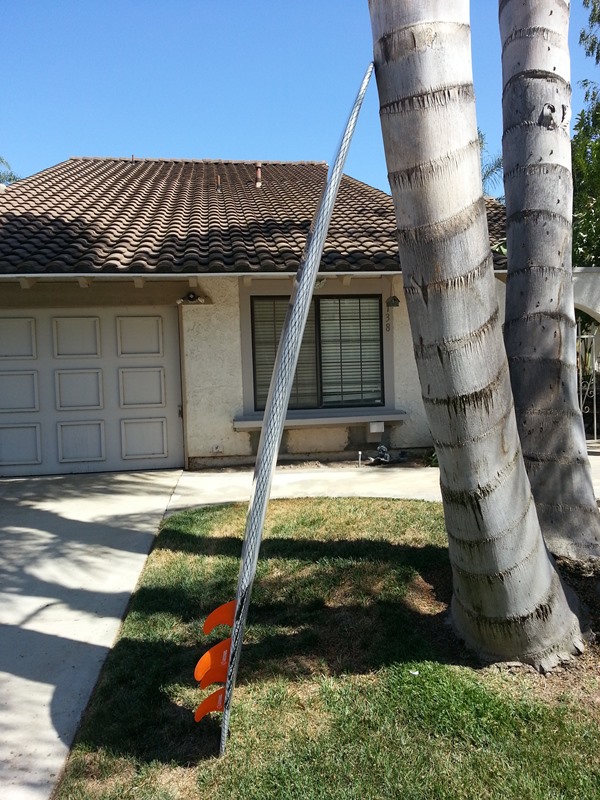 So how long is this longboard?

As it matters, overall

I'm thinking we need to sneak up on the gremlin

with length and width.

You know, there is no specific length for "longboard" in that context, I'm just saying aesthetically, I don't like the look of those longboards with fish tails.  So I'm veering away from that.  The WS as it is does not have that look to me, but if I put the WS tail on a GS front half, I think I might be heading in that direction.  That's all I'm saying.

I weigh in at 175, but varies up and down a pound or two throughout the day, so perfect match weight wise.  The board looks killer!  BTW, I checked, and I don't have any more spare plugs, or at least, I can't find them right now.  So I'll order some spares, and put Dustin's thruster plug in when it comes.  Will try to clean the shop out tomorrow and see if I can find something, I was sure I had several spares laying around somewhere...

Yeah, sneak up on volume if you will, but I say don't be shy to just embrace it openly in public either.  Come out of the closet, haha.  Sure, guys like Dustin don't need all that much, so if they want a little extra volume they can hide it in the dome, or add a little length or width, like you say.  But for guys like us, on the last leg of this journey, I say embrace the volume, because it is the key to wave count and general mobility in the lineup.  Sure length and width, but I think thickness also has to come into play, all the way out to the rails if need be, and thats what the WS is really all about.

The GS, on the other hand, accomplishes what I want without extra thickness, that's a bit of a mystery to me.  So there you have it - a properly designed board, with all the elements working together in harmony, doesn't need it, and dog my cats if I can figure out why the GS works so good for me at 2 3/4" thick and 21" wide! 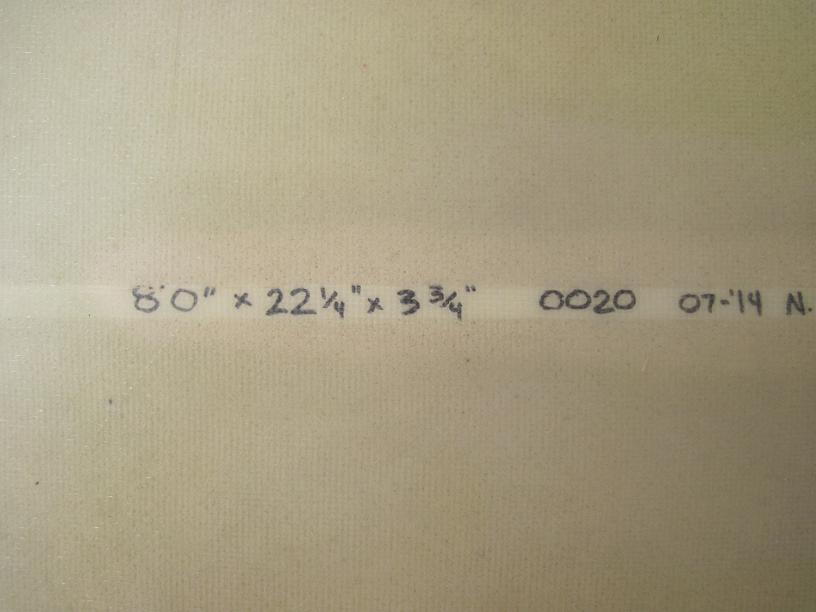 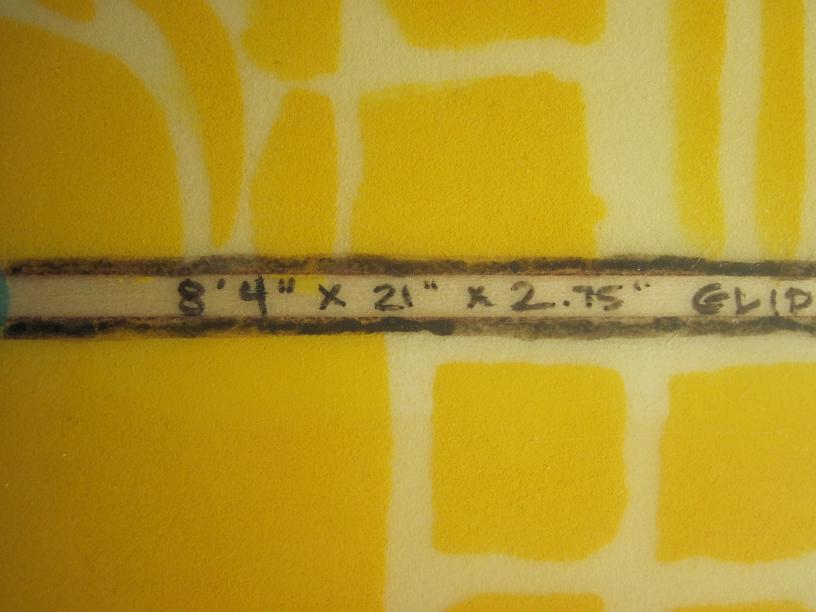 I honestly don't think the rockers are all that different, but I guess a small difference makes substantial impact in performance.  I'm not at that level of building, or riding, where I can really say I know which rockers work best. I have two here that work well on their respective boards, and that's a starting point I guess.  Anyway, I'll have to look through the blank catalogs to see what's available, and find something that will yield a rocker between the two.

I spoke of strategic volume.

And have really worked on getting the volume under the load.

Understand my thinking on LBs

It comes from the Morey Pope (Ventura) days and the John Peck Penetrator.

Which IMHO was way advanced and was introduced around 65!

These guys were “locals” in my grom days.

I wouldn’t try to drop in on him!

Those boards where fast!

Although the volume dispersal on those boards

was forward (as in the first “beak noses) and maybe the first downrailer.

The important aspect of these boards is the rocker.

And here is in a nut shell.

What I learned from those shapers mind set

It is quite this simple for us now.

And that rocker will work well, as the designer worked a lot and that is their best take on rocker.

As you add rocker at one end, you need to adjust rocker in opposite  to the other end.

Here is a photo of a proven outline. #3

Maybe not your cup of tea.

But ride it first.

In closing I will add (now that I know) WS?

None the less a very, very nice board. 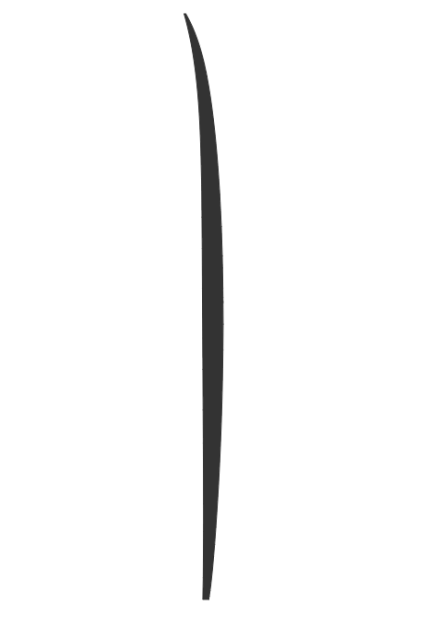 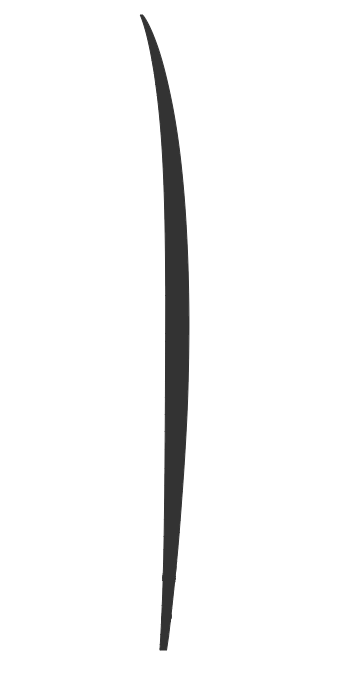 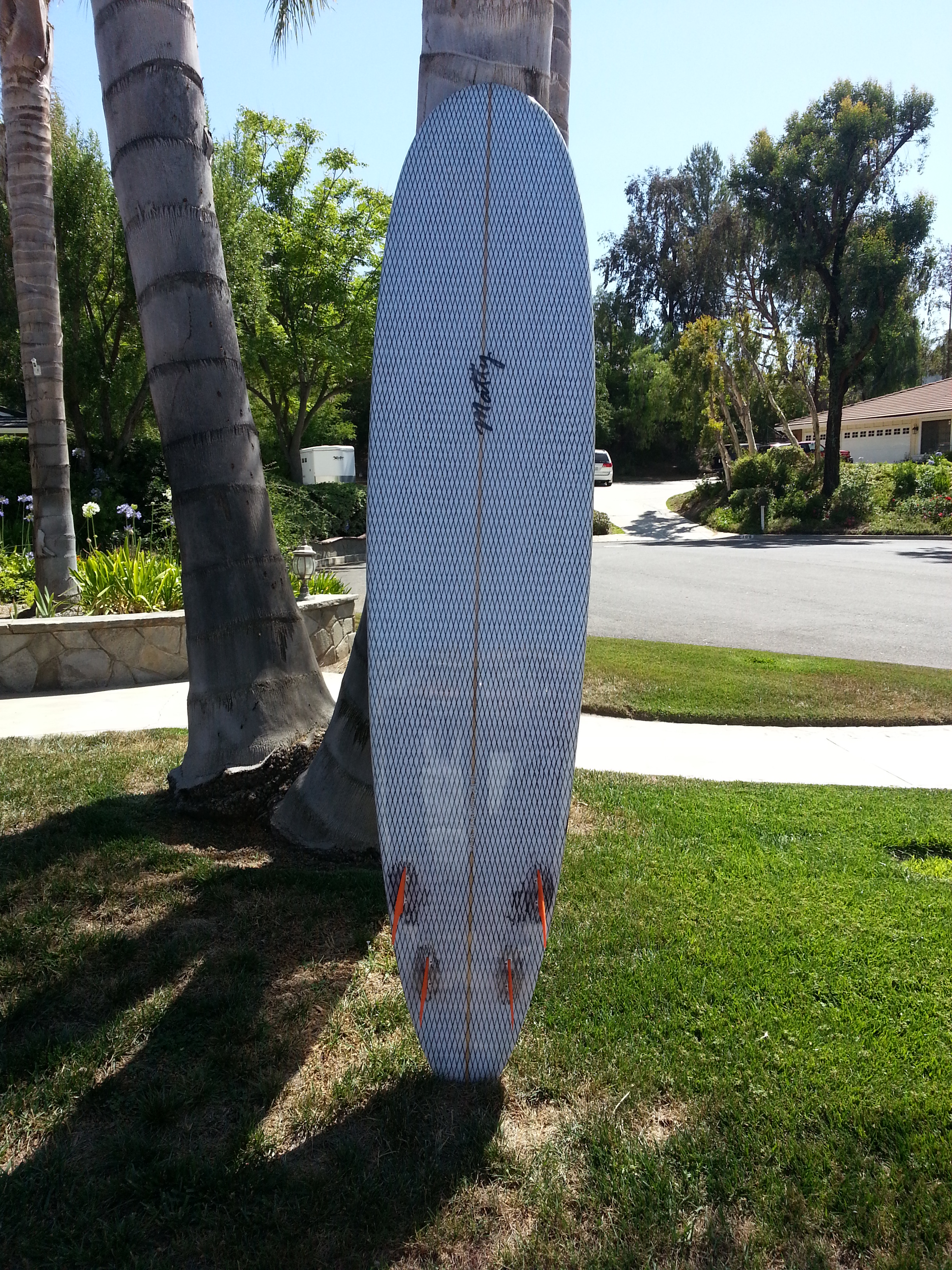