A while ago i was reading the surfer Journal Hap Jacobs piece and inside there was a picture of Dale and Hap and a Balsa Malibu Chip. To cut a long story short, i really liked the shape and would love to build a Foam version. The only problem is i have never seen one and it is unlikely i ever will in the uk, so i was hoping for a bit of help, any info would be great. Due to the fact that i cant shape anything longer than 8ft ish in the shed then that is the length i will be shaping, but any info on, recomended width tail dimensions, wide point, nose dimensions, rails,bottom shape. You get the idea. I am obviously not going to build a dead ringer but something close would be great, any info would be a great help.

The Chip was an offshoot from Quigg, who worked with Simmons until they had a falling out, the Quigg versions had the single concave bottom, but broke away from the slab sided template. The tails stayed wide in the beginning, but the outline had gotten curve through out it, by the time Velzy and Jacobs began building the design, the tails started being pulled in and the wide point moved forward.

In Bing Copleland's photos, his board had gotten the look of a more modern bigger wave board.

I rode the original chip template, still cumbersome of ride

You will learn more, and have more fun, building an 8 footish Pig, than you would a Chip.    But, it's you blank, do what you will.

My shed is 10' long. even a 9' board is tricky, so I end up turning them diagonal...I don't know if diagonal will work in your situation, but I thought i'd mention it anyway

Thanks for the replies everyone. All great help. Sorry for my late reply, my wife dropped the lap top, its the 2nd one that has been dropped in a month. Its getting expensive.

Jim thanks for the info, on the Vely Jacobs it looked like the wide point was pushed a bit forward and the tail was slightly pulled, the board was at a slight angle in the picture so its hard to see how much. but was deffinately like that. I can undertstand that it will be a bit of a tricky ride, especially if i make it .........

Bill i understand what you mean about shaping a pig would be more worth while, but i to be hoest with you i l just really want to give one a try. And you know what they say better to try and fail than never try and all that.

I was thinking of 8ft x 22 1/2 x 3 1/4  something like a 7 inch tail (but this will change  i am sure as i look at the template when i am drawing it) not sure how far up the wide point will be that will have to be as i draw the template. when it looks good it will have to be good . I am sure its not the right way but maybe a bit of belly going to flat then possibly some V. Its a guess but it might be an idea. As i say i have never seen one so i am not looking for total accurecy and obvously with never seeing one i will not get it so i will just give it a crack.

The 8ft max length is a pain but i actually have a trangular shaping room as its all i could fit in but its better than nothing and i like the midlengths anyway so all good.

Thanks for all your help guys i will keep you posted. Unless of course it all goes south at which point i will just post a picture of a grown man sobbing by a lump of burning foam

note: the pics are "borrowed" and may not stay up for long, so in each case I posted a link to the site I got them from, for future reference  - Huck 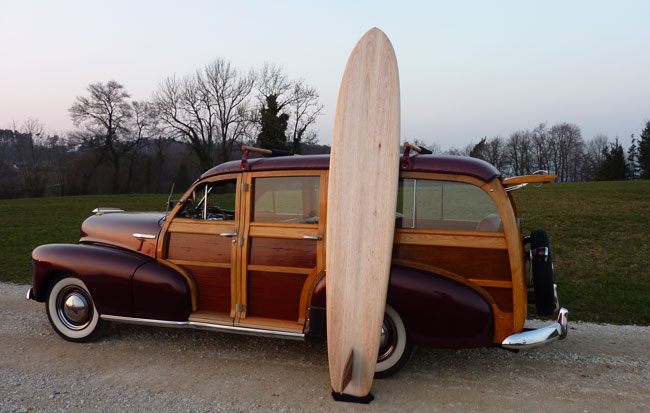 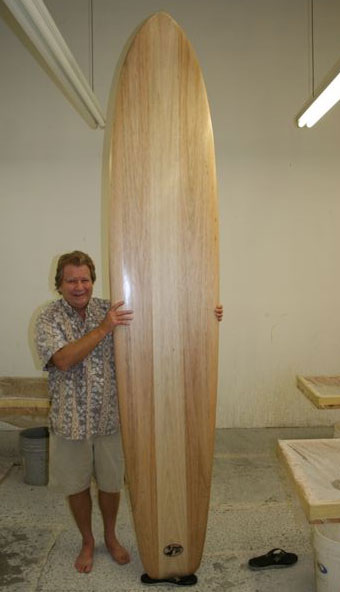 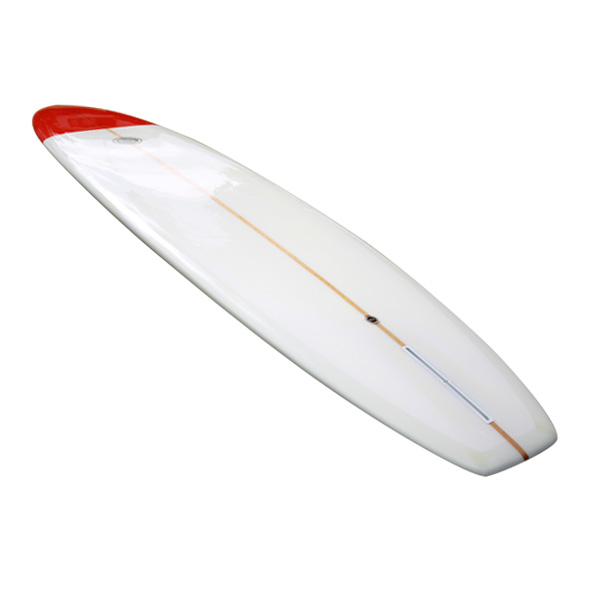 "Inspired by the classic 1940's Californian Potato Chip longboards first developed by Bob Simmons then made famous as the Malibu Chip by Matt Kivlin and Joe Quigg the late 40's. They took his concept and radically streamlined it creating thin railed, fully foiled, pointed nose blades that screamed down the line at the 'BU!

Velzy and Jacobs went on to create the Pig in the 1950's and really any board with the wide point aft of centre can be attributed to them...a turning point in surfboard history! Handmade to order in Cornwall by John Isaac's Squire Surfboards.

The board is a 9'9 x 23 x 3 pulled nose, hipped, contemporary pig with an ashtray tail. Glassed with 14oz of Volan on each side, it has a 3" wedged balsa stringer with Pauwlonia and glass on a contemporary D fin in Atomic Eames fabric with resin pinlines and Eames fabric nose panel. Available as a made to order only exclusive, please contact us for details."

(apparently they're calling this a modern interpretation of the Malibu Chip, check out the rocker, looks like they reversed the blank to get that rocker setup - Huck)

"Its a quigg malibu chip replica." 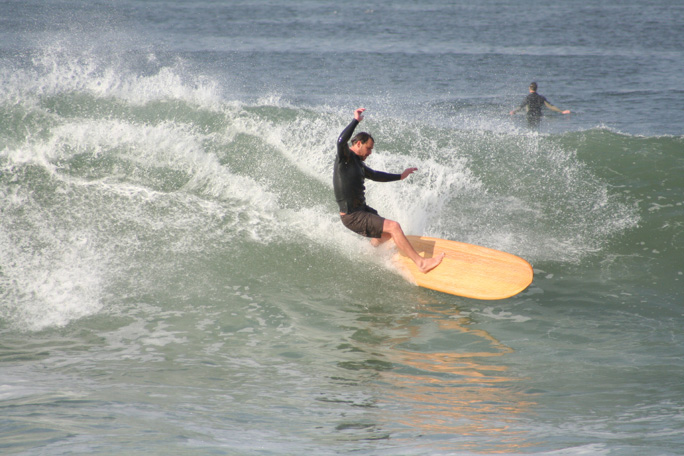 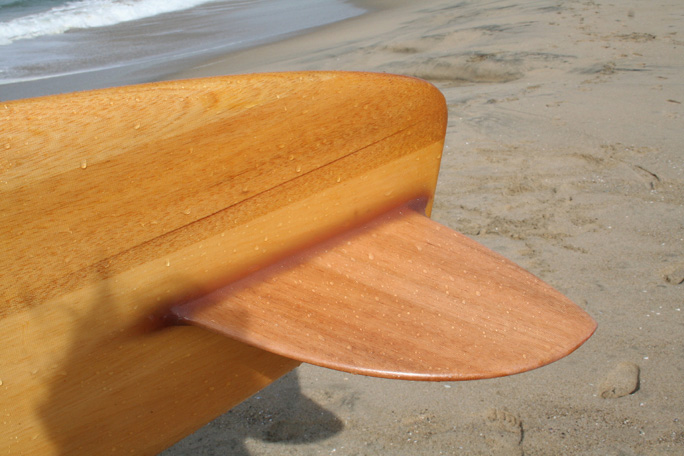 By the end of the 1940s, Southern California surfboard builders were engaged in a quest for better equipment—boards that would be easy to paddle and catch waves on, and be more maneuverable. They were beginning to understand how changes in outlines, bottom contours, rocker and rails could dramatically alter a board’s performance.

As fiberglass and balsa wood became commercially available, surfboard builders quickly adopted them as the new standard in materials. Balsa was easier to shape than redwood and once wrapped in fiberglass, much lighter at 30 - 35 pounds.

Santa Monica-based Joe Quigg turned out a series of such boards in the late ’40s that were intended for the small but growing group of female surfers at nearby Malibu. “It helped the girls to leave the tails wide,” recalls Quigg. “I’d put what I called easy-rider rocker in them. They were real easy to ride. A lot of girls learned how to surf on those boards in just a few months.”

But it was not just the women who appreciated the lighter, better performing boards. Many of the men borrowed them and found that they too enjoyed the way they rode, opening a new chapter in surfing style known as “hot-dogging,” characterized by snappy turns, “walking the board” and noserides that were impossible on the clunky planks and hollow boards of earlier years.

In July 1950 a group of Malibu surfers traveled south to San Diego’s Windansea for a Fourth of July weekend surfing contest—and they took their new “Malibu” boards with them. Recalls Quigg: “This local guy, Art Cunningham, sees our boards, which had rocker, and were curvy, and were yellowish, and he says, ‘Wow, look at those potato chips.’”

Known thereafter as Malibu Chips, the balsa and fiberglass boards were a milestone in board design and a turning point in the evolution of surfing performance.

The Mailibu Chip I made for the guy in Switzerland was for display only with his '47 Chevy woodie.(See the post above)

If you're going to ride it, make a pig. It will surf much better.

Interesting fact. If you take a template from a pig and from a Malibu chip and lay them on top of each other (with one reversed) they are the same.

Thats some fine google work Huck and some nice boards, that hobie looks pretty nice. I didnt expect it to have concave, i still think i will be going for a bit of belly then to flt and a bit of v. I rekon it will go pretty good, although i have been wrong in the past  but thats half the fun.

Nice looking Board Kayu, i often see you rboards over on msw. Top draw.

I have very kindly via sway been given some great help and info via a great swaylocks man to get myself a template, so a big big thanks there. Where else can you get this kind of help and information, with out this site i am not sure i would have ever picked up a blank. Which would have been a great loss to my surfing enjoyment.

Just one last question Anyone got any idea on the rocker?.

...I have very kindly via sway been given some great help and info via a great swaylocks man to get myself a template, so a big big thanks there. Where else can you get this kind of help and information...

Just one last question Anyone got any idea on the rocker?.

You're welcome for the research, I was teaching myself too, as I had no idea what a Malibu Chip was, until you asked.  Sways has some great people, some of whom are in the background, doing a lot of really helpful stuff.  I know because I too have received.

On the rocker - the old boards had very little rocker by today's standards, using what they had available to them at the time.  My suggestion is to go with a more modern rocker, unless you're just making a wall-hanger, or something to drive around with on top of your woody.  You have to figure what works best for the type of waves and surfing you do.

I don't recall what length your board was going to be, but in the 8' range I'd go about 4-5" in the nose, 2-3" in the tail.  Thats a rocker setup I use on a lot of my boards, and it works out great, at least for the so. cal. point break waves I frequent.