At Lancelin [an hour and a bit Kombi drive from 'Hicksy's] .We were in the water around 6.30am.

I surfed it in waist high peaks up and down the beach . Pretty empty , and offshore .... woohoo !

Paddling out , I noticed the difference ! [ having ridden my 9' mal for the last few weeks. ]

But , duckdiving was JOY !! [Could really SINK it under !]

5 lying down [as per Amby's example].


The slightly concave deck , and the decent amount of nose rocker , felt nicer than my 'prawn' , which sometimes bogs the inside nose rail in sucky lefts' takeoffs.

Backhand , it felt really nice off the top ...reminded me of the Nedlands bowl on my wide skateboard ...glidey, fast , highline speed .


It will be interesting to try this as a twin fin . And also as a twin keel .

Yesterday, I mainly wanted to feel out the holding power of the single fin , and the rails , and the difference with the nose rocker.


Later , (unfortunately just as the sideshore Northerly blew in [around 9 / 9.30am ish ?] ), I tried it with these bonzer runner-type side fins , but the waves were by then a bit mushy to really tell .

I can't wait to get it in some bigger waves , and try the two-fin setups , maybe that's what I will do with this board ...work my way from one to five fins , and report back here from time to time.

Hicksy , Lavz and I mainly just surfed for the first hour or more [as you do when you see a fairly empty beach with peaks !!] So , we didn't really get any photos for a while...... 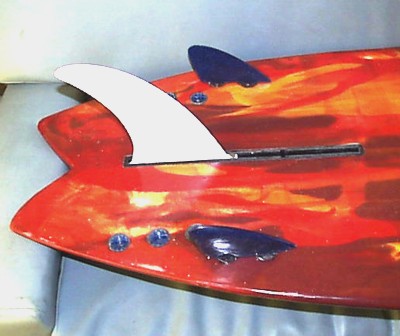 Thanks for the report. I'd be all enthusiastic if I weren't so jealous (got a bad case of "the flats" at the moment).

Look forward to hearing your updates - I'm hoping to build something fairly similar in the not too distant future.

thanks for the REPLY , Doug !

it's always nice when the moment of truth arrives ...paddling out on a board made by our own hands , and finding that it works to our liking eh ?

It will be interesting to see if less or more paddles will need to be taken with this size board once the surf gets shoulder to head high. [I rember Simon saying , with his 5'5 at L.A. that he would basically get pitched with [under] the lip and pull in. He is a better surfer than me , though ...I'd probably get flogged attempting the same thing !]

I'm thinking deeper twinnies or quads than I've used in the past on my "prawn" , too , to hold in the wider tail. It will be interesting to compare them , as my back side plugs are a LOT further back on the "bushfire/ fireball" , than they were on the 'prawn'.

i'm stoked for you!

rode it with this setup today ....

the backwash was making it difficult , but on two lefts , the drive off the bottom [backhand ] AND off the top felt nice .

The rights were not co-operating today , unfortunately , so I got to surf it backhand for an hour or so.

It was nice to give a new fin setup a go , anyway ! [ and to have scarborough to myself again] . Marginal conditions , but hopefully the forecast swell increase and offshore winds may eventuate tomorrow , then I can have another crack at it !

Great reports, Ben. There is NOTHING like riding a board you made with your own hands and the thing WORKS. WAHOOOOOOO! Mike

I rode it in some rights today , for three hours .

Didn't seem to want to slide out at all , which is good.

It was setup with the canard quad setup again this morning ....

Well, I rode it as a single fin today .

My favourite set up so far.

That may just be because I have always enjoyed and had single fins . ( I think the test will be in a month or so , hopefully , when our autumn swells and banks 'should' really be established .....)

i'm stoked for you chipper! single fins are ofcourse the best possible fin setup ever....