Info about this shape

I was looking around the web at shapes and found this "fast back" on the Dewey Weber website. Does anyone have any information on how it rides, what conditions it does well in, and more specific dimensions. The only thing they list on the website is length (6'10"-7"2'). Thanks again.
Damon

Wow, a true pintail designed to ride small waves.
Looks pretty wide for length, so it's limited to small waves.
Cool template, chopping off 3" of tail would qualify it for a double ender.

Funny, when I first looked at the board I thought the nose was the tail and the tail was the nose ( my eyes are goin). It would probably be a fun board either way. Get a template and try it out. An excuse to shape two boards. Mike

The Strato series, they called it, though those were the 'production' stratos, not the real experimental versions of the Strato we got a couple years before that. They came in two flavors, the round-nosed and square tailed 'performer-ish' ones and that pintail variety, though they were a bit more of a drawn out roundtail.

If they are true to the old shape, it's a rounded rail, thinning and getting to be more of a harder downrail as it goes to the tail . The Weber Ski ( a pretty neat board in its day, the G&S Magic was pretty much the same thing) was a later version. They ran () usually ) in the mid 7' range, 7'4" to 7'8" were the most common. Had the miserable Variable WAVE Set fin system, which kinda made life difficult, a Greenough III or IV generally.

Good, quick small wave board, slight belly in the nose that quickly became flat, faint vee in the tail, rocker real flat through the tail but kicked pretty good in the nose, you'd trim to where your front foot was on the decal for speed, a quick half shuffle back to crank it around.

I just finished my first board which is kind of like those... 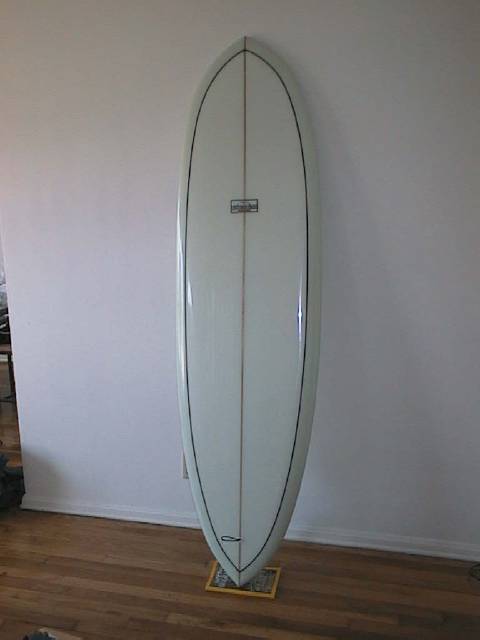