Older surfer - new board ideas for the comeback!!

I am just about to make a comeback to surfing after 8 years out. I live in Cornwall UK, In the late 70s through to the early 90s I used to shape and laminate many boards from short twins upto 7'6" fat boy thrusters and the odd mini mal that where just coming in. I was 150lbs and reasonable surfer back then but with several house renovations and bringing my two girls up iv'e not had enough time to get down the beach and sold my last board 4 years ago. I have been riding body boards with my youngest for the last 2 years but need to get that buzz again. The problem is I am 43 and a hefty 245lbs 110kilos, my height is 5'11".

As I have been out of touch so long with designs and dimensions I wondered what do you readers recommend. Basically I not to fussy what it is but I will need it to work for me and I'm not to bothered about size. It will need the floatation and easy paddling due to the fact I will need to get my fitness back.

I have read on here about nuggets and bonzers, I have riden one of Cheyne Horans keel finned boards that was 5'11 in 1983 that I owned after the euro pro at Fistral Newquay this was egg shaped. My favorite all time board I built was a 6'8" quad in 1983. I still have all my tools and can't wait to get building again.

Hey
Welcome back to the water!
Forget any radical innovations, you just need a mid 7' x 23 x 3.5" thick funboard, witih a wide nose, a wide tail, and lots of volume. Tri fins if you are still athletic, single if you think you might now be a cruiser.
Tri fins need rider input and constant direction changes to keep speed, but they provide for a bigger turning sweet spot.
Singles, as you know, cruise real fast.
Oh....had a roomate a while ago who learned to surf (from scratch) with an 8'6" Gordon & Smith single custom made for his size. He was 275 lbs.
Go with a flatter nose rocker, but lotsa tail rocker. That way, it paddles better, turns easy, your weight keeps the nose from pearling, when you stand up.

Thank you LeeDD just the sort of info I'm after.

What size tail would you recommend?
Fins 12.5" from tail?
I fancy squashed tail.

for some ideas, check out Liddle surfboards.com-7-8 footers with width and thickness/thinness where you need it..

Hey
Squash tails the best, especially for backside snaps.
I'd plan on installing a long 10.5" finbox, post it thru to the deck, then tie the package together with woodies on both sides of the box, extending 3" past both front and back.
Since you are big guy, you can stress out the finbox connections quite easily, with a powerful bottom turn on a head high wave. Glassing on or using short boxes for side bites of around 4.75" would help alleviate the stress on the center box, and allow for bigger turning sweetspot, as well as use of shorter main fin (like 7.5" instead of a single's 10'er).
A 18" wide nose and about 17" tail, with a widepoint like 3" forward of center, would allow for lots of surf size variances, and be a good all around board.
Brewer used to say wide point should be thick point, but I think that has been amended recently to thick point at just behind center, with a thinner nose that you can push down the face of the wave, while the thicker tail picks upwards, allowing you to paddle down the face quicker to catch waves easier.
For surfing in strong offshore winds, a nose should be slightly narrower than the tail, to punch thru the winds, allowing the board's nose to tip downwards.
Don't bother noseriding such a shorty, as it would look jerky at best, and downright ugly at worst.
Better too floaty than not floaty enough. It's only going to be mid 7's, so you should be able to snap turn it even if it is glassed heavy with single 6 bottom, double 6 deck, and extra knee/back foot patch of 6oz. 16 lbs. is fine, if the wave size is over 3'.

Kp has an 7'10" , i have a 7'5" we each currenlty ride( we also have many others in the racks )that are the point break design.basically, we have those type of boards from 6'10" on up so if you need any dimensions, etc, we can help.Good surfing to ya!

An 8' Mccoy nugget single fin or a 7'6'' would be a great choice for your height and weight. I am 6'1'' and close to your weight. I have three nuggets and I love them. If your in the Uk, I think there are some shops that carry them. Check with Mccoy at mccoysurfboards.com. 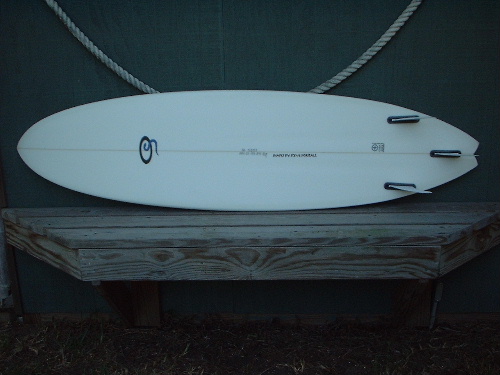 Could you give me some dimensions for nuggets?
What sort of fin do they employ and sizes?
Do you have any pics of the underside of nugget?

The cheater board looks good quite fancy this style.

Thanks to everyone who are giving me ideas. I'd like to say to LeeDD that i'm a great believer in glassing strong boards and your glassing specs are exactly what I used to go with. Better stronger than repairing all the time.

Today I have looked at Nuggets and made an outline plan from ideas given to me.
I think the shape looks about right for converting to templates.

What do you think?
I would like to get a Keel fin if I go down this route, who could supply me with one in the uk?

Hey
I'd advise against a keel fin, either in single, twin, or tri, for any big guys who are strong and like to really turn hard.
The shape is just not efficient, compared to a normal outline fin, and big strong riders easily overpower them both on the bottom turn AND when riding hi on the wall.
Single obviously not workable, as that wide tail would just lever the fin off the water, no matter how much you weigh.
Sure, you could make the keel fin, on the rail, big enough to hold in, but it would have to double the surface area of a regular fin, and cause more than double the water drag.
That tail looks really wide, I'd go with regular 4.75 sidebites and maybe a 7.5 tail fin.