Something's not right with this picture... *PIC*

I surfed my new hollow fish yesterday for the first time...First time on a board under 6', too...And the first time on a board with two, count 'em, two fins... The NOAA forecast called for 8' @ 10 sec, with east winds...Actuality was 8' @ 6 sec...with southeast winds...A whole different show...And SUPER foggy...I waited out the fog, watching unrideable grinders at the toe of the jetty on the bayside...Some sets dredging double up 10' faces...Perfect 15 yard waves that are absolute suicide... After that imagination show, I checked out the Cove, which an hour before was one big closeout...Now a couple guys were out getting shacked on waves with shoulders..I figured now or never, suited up walked way down the beach out of everyone's way to see if this 5'10 would let me paddle 'er or even ride 'er...I slipped through the shorebreak and stayed a bit too far outside for some of the more ridable waves...When the tide changes at the Cove it can get drastic...It did that...6' waves hurling 6' hollow...Not the easy shoulders I was hoping to get, for a first ride on the fish...The board floated great...Not just good for it's size, but great...Like a 7'10"...But dropping in was out of the question on these dredging beasts...I got to the bottom of one before sliding off the tail...This board is SHORT...So after 1/2 hour I went in, got in the van and drove wet back to the Jetty... The surf had cleaned up a bit, and I was determined to get some RIDES...So into the rip I went and was in the line up soon...My first wave was a fluke pop up left that usually isn't there... A solid 6' face...It happened so fast I didn't have time to over analyze the shortness of the board and the length of my legs...I just stroked in easy, popped up smooth and compact, made an easy drop bottom turn, and run for the shoulder/channel, kick out and feel stoked...Mission accomplished... A friend who makes a lot of the boards ridden around here was out, and he came over to check out my board...Previously whenever he saw my hollows there was this unsaid feeling I got...Like, "yeah, but they're a joke, real boards are FOAM"...Yesterday he had a way different look in his eyes when I rolled off the board and he handled it, checking foil, flow dome, flat and vee, all combined with the visual overwhelm that I paddled out on...He was just nodding, like the bulb finally went on... Soon after that, I got a great right, a 5' face backside, that wound down the sandbar fast...The board dropped in feeling longer than it was, and at the trough , exploded fast down the line off the bottom turn, WOW, that was sudden...I did a whole bunch of loose playful turns mid-face and just felt giddy...I thought it would take several sessions to hook into these feelings... I got a few other lesser waves, but I did realize the potential for fun this board represents... I feel kinda strange, next week I turn 48 and I'm riding a 5'10 fish...Something's not right with this picture... http://www.hollowsurfboards.com 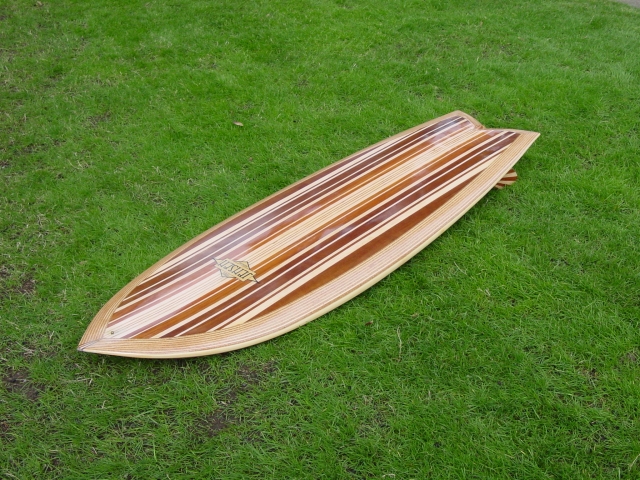 Seems like it's hard to describe a series of events, or an experience, with out the use of those words. Personally I find Mr Jenson's posts (and boards!) inspiring and think Swaylocks would be a worse place with out them. CHeers for the copy of SDC and CD Paul, keep up the good work, keep surfing, building and sharing. Ian Fitz

Paul, as usual a beautiful board, and a good story. Keep 'em coming.

Awesome review Paul. Glad to hear the stoke of a re-born grom. Now just don't throw your back out. I love your use of veneer and composite construction. Definitely, not easy mediums to make flow like you do.

Beautiful board. Hope you got something to eat in Aberdeen on the way home. Love the cove left barrels. http://www.blakestah.com/fins/

Thanks for the post and pic. The excitment and joy came through clearly-thought I was there for a moment. Patrick

Hey You know, that first "LeeD" is not me. Great story Paul. I answered on surfermag also. Keep 'em coming.

Dang! I was selfishly hoping you would hate the board and sell it to me. Just kidding,Paul. Great board and story.