If you want to beat Twinzer ideas around here's the spot.

I owned a Larry Mabile Twinzer fish for a while, it was very fast and loose, so fast you could make it further down the line in small waves than a standard keel fish.

It seemed to carve through turns without acelerating or decelerating, just retaining it's speed.

I have to say this was one aspect I didn't like, I love that drivey feeling of projection out of a bottom turn that I get with Bonzers and keel fins or quads.
I remember on one clean shoulder high day, I got back out of the water and switched it for a Bonzer egg. That was more fun. Horses for courses.

I notice that the lead fins are almost the same size and template and the rears in Greg Griffins 5 fins.

I can't post the pic, but it's on the link below

Rich, thanks for starting this. I'm a quad convert now, so I am very interested in the full 4 fin notion.

I have a twinzer I have not ridden in a while. Maybe it is just the fin placement (little fins forward), but I've been thinking, doesn't this arrangement have some things in common with Herb's super chargers and the C5 thing? So there is more going on than meets the eye?

You're right on with your observations. The lead canard on a twinzer and Herb Spitzer's "Superchargers" so very much of the same thing. Promote laminar flow. Put the main drive fin in a wake so less turbulence is created.

Sizing and placing fins on a twinzer is super important. I would not choose to have two large rail fins. I believe that the small/big arrangement is best for rail application.

The quad is a completely different animal even though it has four fins. The fins are placed very differently than a twinzer with the lead fins place much the same as a truster cluster and the trailers more foward than a truster trailer but well off the rail line. Thus the board has more directional stability but isn't as snappy.

We see massive variations in fins placement with some boards being a hybridization -- quad/twinzer -- somewhere in between the two.

"We see massive variations in fins placement with some boards being a hybridization -- quad/twinzer -- somewhere in between the two."

Im very interested in trying something like a twinzer setup. Ok, so the above is just a twin keel with some SC's whacked on, but it definately paddles faster, and i feel it "releases" better, oh did i say fast? haha. Would like to try a twin fin ( not keel ) version, on a shortboardish/modern fish shape. I notice on twinzers, the lead fins seem to be bigger than superchargers, and also further away ?

Hi Halcyon, Thanks for this thread I hope you don't mind this post of a Twinzer set-up. I find having the conard fins vertical works against the rear fin which makes the board ride stiff. These fins are at 18 degree can't to work with the rear fins which gives the board a looser feel, which is similar to a Blue Hawaii Twinzer set-up. Mahalo, Larry

Larry, I'm glad you posted that and explained that. Thank you and Rich for providing insight on this fin configuration and pics too!

Wil increases the cant in the lead fin also, but not that much, I measured one of his shaped boards. It is nice, if you want to make a Twinzer, to have some idea of how the fins were placed by its inventor. I believe he has worked with Rainbow and you can probably get more up to date info from them. But the standard was the twinzer fin was 1 3/8" from the main fin (as in the size of the "slot", there was 3/8" overlap between the rear of the twinzer and the lead of the main fin, and the twinzer fin was canted slightly more.

Wil told me that the lead fin was there to promote flow attachment on the inside rail fin. A significant other role of the lead fin was to promote a wash on the outside rail fin, which operates at a negative angle of attack - and that this wash acted to minimize the drag on the outside rail fin. He updated the twinzer main fin (but not the canard) to a twist fin in which the base was singly foiled and toed in with standard toe, and the tip was 2 degrees less toed in and doubly foiled.

The Great Spirit didn't make too many people like Wil.

His boards rode like very fast twin fins. Souped up twins. They could grab a high line and hold it very well, trim very fast, a little sketchy if you wanted a deep bottom turn, but turned quickly on cutbacks.

Twinzer lead fin:
Toe-in: parallel to main fin
Cant: 2-3 degrees MORE than main fin.
Distance from rear of board to rear of fin: 13"
Fin base: 2 3/4"
Fin depth: 2 3/4"
Fin has a raked ellipse shape
Perpendicular distance from base of main fin to base of twinzer lead fin: 1 3/8"
Overlap from twinzer to main fin, measured parallel to the stringer: 3/8"
Twinzer is mounted WITHOUT FIN ROPE, so that the fin makes a sharp edge with the deck. Wil felt this was important on the twinzer lead, but not on the main fin. He mounted them in Q-cell plus resin, and there is a lot of ding repair work remounting them (the ding repair guys usually use fin rope).

This is interesting stuff. I always look at the thing about a lead fin or wing "cleaning up" flow to a wing or foil behind with skepticism though. The color guys on F1 broadcasts--not the actual aerodynamicists--say things like that. If you have an overall amount of area, I can't see how you reduce the work of getting through a fluid overall by moving one amount of resistance to another place a couple of inches (or feet, in the case of F1 cars) forward or aft, but hell I dunno.

I like that wash/attachment thing. It seems to me if lift is an overall redirection of flow off a foil, the back side flow has to stay attached to promote the lift wash off the trailing edge.

I absolutely love mine, if this board snaps I'll have it copied. 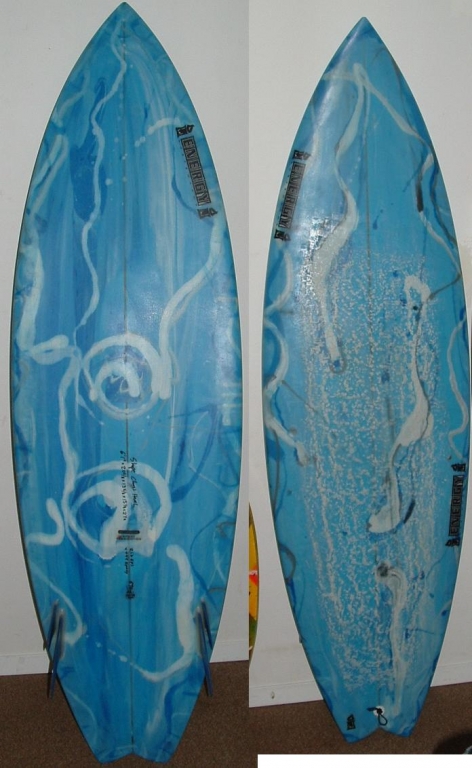 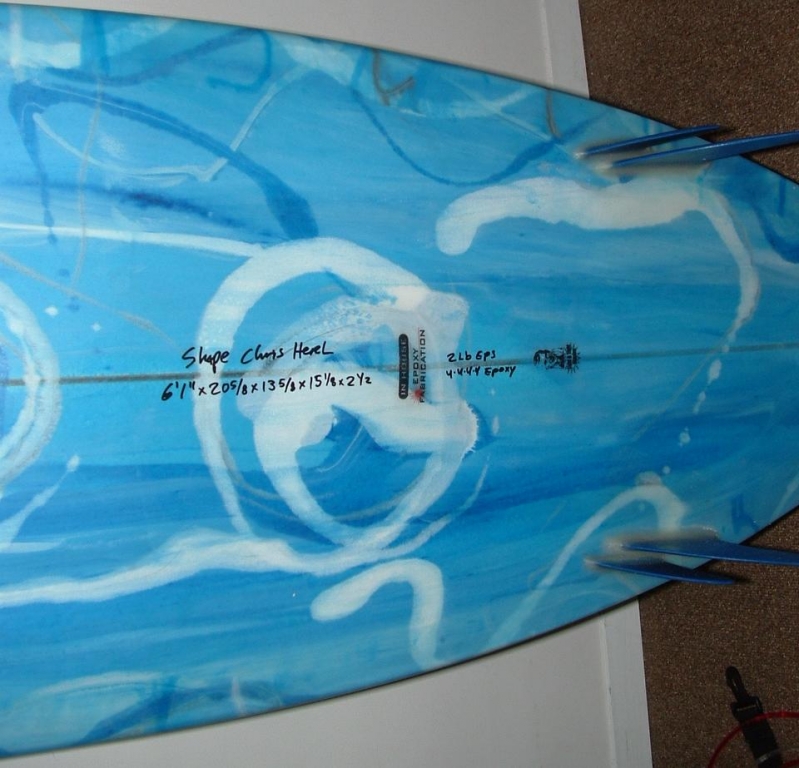 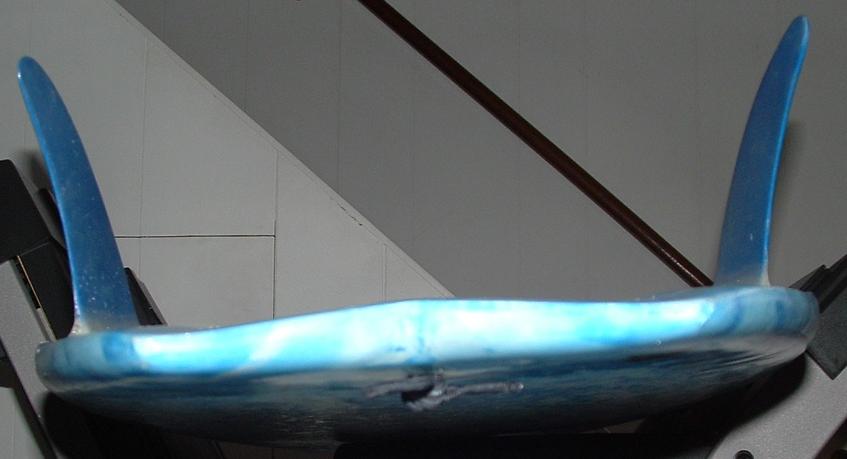 There's one! Is that one you did, Blt? Have you any ride reports? That's more the thing I was talking about with the multi-element deal--you'd have to have significant interaction there!

The twinzer thing is an option I wanted on mine, but my fin clusters came back from my glasser much more spaced out than we'd talked about--I guess he had a change of mind on it and gave me much more of a McKee setup than the close-spacement I'd had in mind.

Any of the fin gurus have some intel about how spacing the fin cluster on a twinzer wider or tighter affects the ride?