Home
Submitted by txsurfbob Tue, 2017-02-14 14:15
I just picked up a beautiful vintage 70's 7' 9" Surfboards Hawaii gun shaped by Mike Slingerland. Its pre leash plug and has the original Rainbow fin, not drilled for leash. It has a tapered stringer. On the stringer is the number 5625 with an "S" below that. I found it in an antique store in Weatherford, Texas. How it ended up there, I have no clue. To the left of the Surfboards Hawaii laminate it says "Charlie Don't Surf" and on the right side has a stick figure of a viet cong with a circle and slash over it. They look to be hand painted on but very professionally. I'm trying to find out some history on this board as it is pretty unique with the Vietnam War stuff on the deck. If anyone know Mike Slingerland, sure would appreciate it if they would ask him if he remembers this board. I know he has shaped thousands of boards and its a long shot. Thanks. 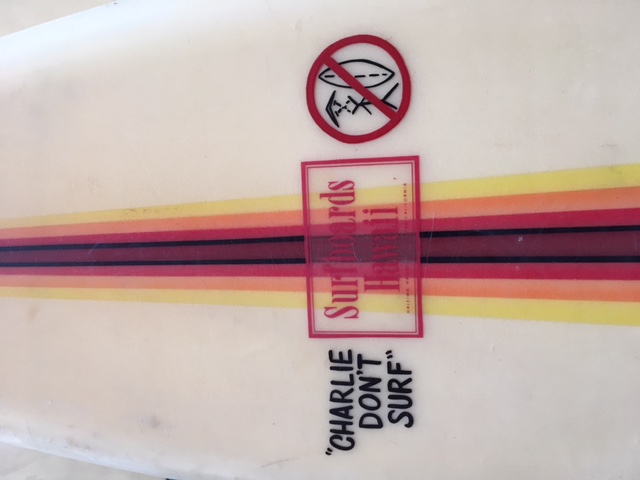 Permalink Submitted by LAL00O00Wed Nov 01, 2017 09:11pm
got any more pics showing the outline and also any names or dimensions?

Permalink Submitted by LAL00O00Wed Nov 01, 2017 09:11pm
http://stokednboard.surfingheritage.org/pdf/Surfboards_Hawaii.pdf This link has help me identify many boards. Maybe itll help you

Permalink Submitted by artzTue Nov 14, 2017 12:11pm
You might be able to get in touch with Mike by contacting JP at Surfy Surfy. Mike is still shaping Boards up at the Moonlight Glassing Factory in San Marcos CA. You can find Surfy Surfy on Face Book. “The Charlie don’t Surf” comes from the movie Apocalypse Now. Movie came out in 1979 so that should put a date on the Board.