I've been enjoying shaping widepoint back longboards lately, and rather than getting tired of them, I just keep liking them more.

Anyways, for this newest board I wanted to try something a little smaller for chunky beachbreak manuverability, but with a truer pig sensibility - low rocker, belly throughout, no hard edged rails, no nose concavey stuff.

I had an 8'9Y blank from USBlanks, and was playing around with my pig template on it for an afternoon or two while I visualized it. I mentioned it to Bill Thrailkill, as I was thinking alot about square tail dimensions for a chunky beachbreak pig, and he suggested 8'4 x 22  with a 7 inch square tail. His recommendations were spot on!  I love this board! I couldnt quite make the template lines work for a true 22" width, but aiming for that helped pare me down from the 23" hips my template would have created. I popped my nose a little wider than the original 16" nose in the template, and the lines let me get to 17.5 in the nose while still keeping a pretty substantial hip curve. Rocker is about 3.25 front and back. I measure this by continuing the true rocker curve out to my ruler, rather than measuring the  little flippy up nose I made in the last 1/2" of the board.

While I was at it, I tried out my first wood tailblock, fabric inlay, and resin pinline well. My feeling in these early boards (this is number 11)  is that I'd rather get all my mistakes out early in all phases of construction and learn as much as I can.

For the tailblock  I used two pieces of 1/4" Walnut capping a 3/4" strip of ply that accompanied my grandfather's tablesaw when I inherited it.

The nose inlay I used some cotton with a cowboy print in honor of Dale Velzy and his pig concept that has brought me so much joy. I put a 1/4" resin pinline concealing the edge of the fabric. As my skills improve 1/4" will be embarrasingly wide, but for now it is what it is.

I glassed the board with two layers of 6 on the deck and one layer of 6 on the bottom, with an extra fin patch and extra deck patch. I grew up without money for boards and I like my stuff to last. I prefer cut laps to free laps. The small bit of exra taping time saves me a ton of time later; I'm sure my free laps are unskilled and messy and an expert would not have this issue. For me, no contest.

I finished the board yesterday and got it out this morning. I love it! The board is super responsive from the tail, paddles and catches waves well, and excels in that classic style of take off, quick bottom turn to a high line, step ahead of the hips and ride out the line.

I was struck by Bill Thrailkill's advice to keep the true rolled bottom throughout. Despite being only an 8'4 and me being 6'1 and right around 200lbs, the board let me walk forward easily and was quite solid and predictable. That convex belly plus 50/50 rail action and it's effect of holding the board's tail down when I went forward was dramatic and noticeable compared to my previous board, a much larger 9'0 with nose concave and hard edged and boxed rails in the tail. Fascinating to read the concepts then feel them work.

Anyways, the board goes, and this was in garbage LA summer beachbreak as the wind was hitting it. I had one small peak to work with and it was enough to feel out the board before it was family time. Bill, thanks as always for the advice! This one is likely to be my daily driver for a bit! 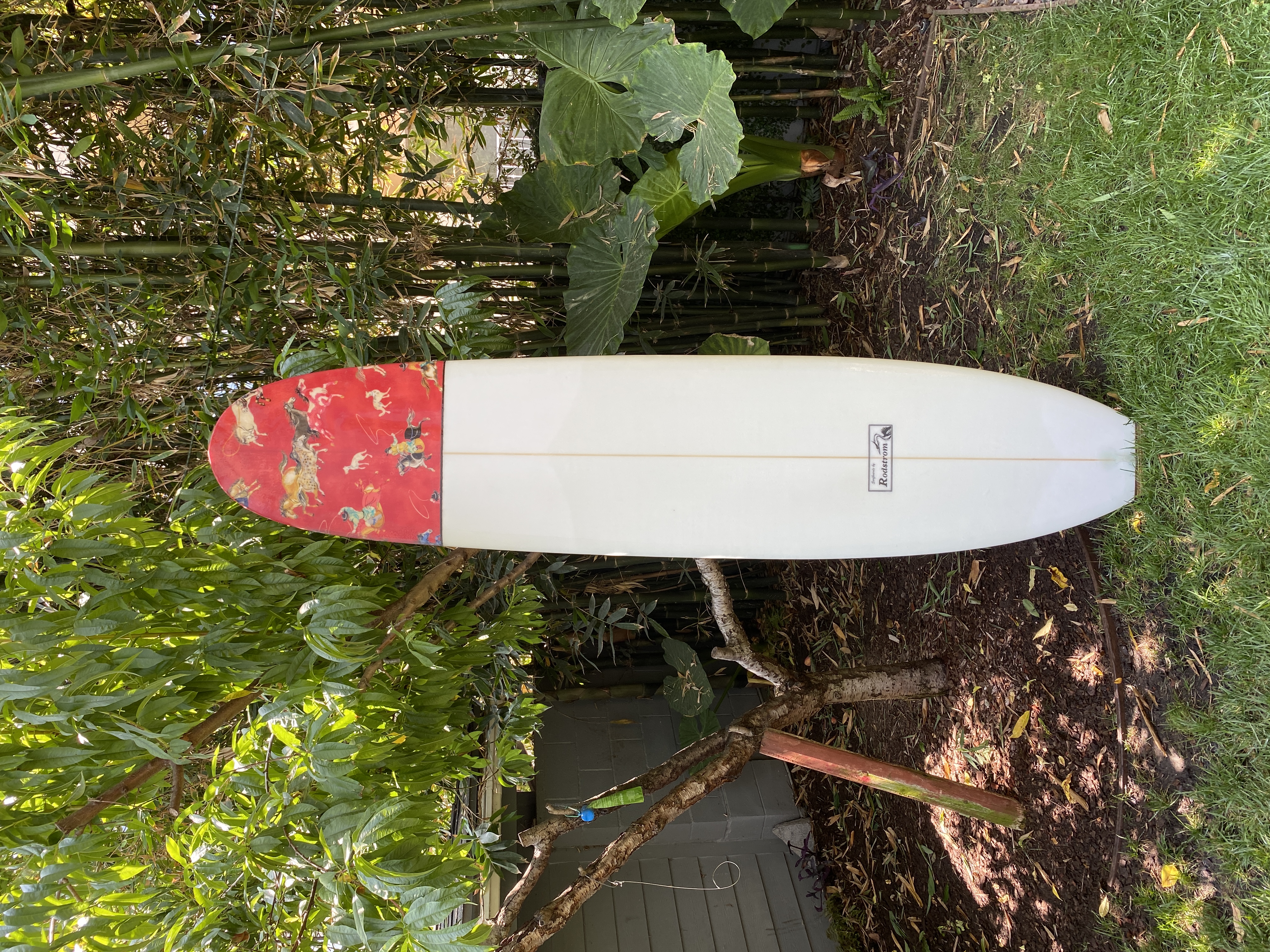 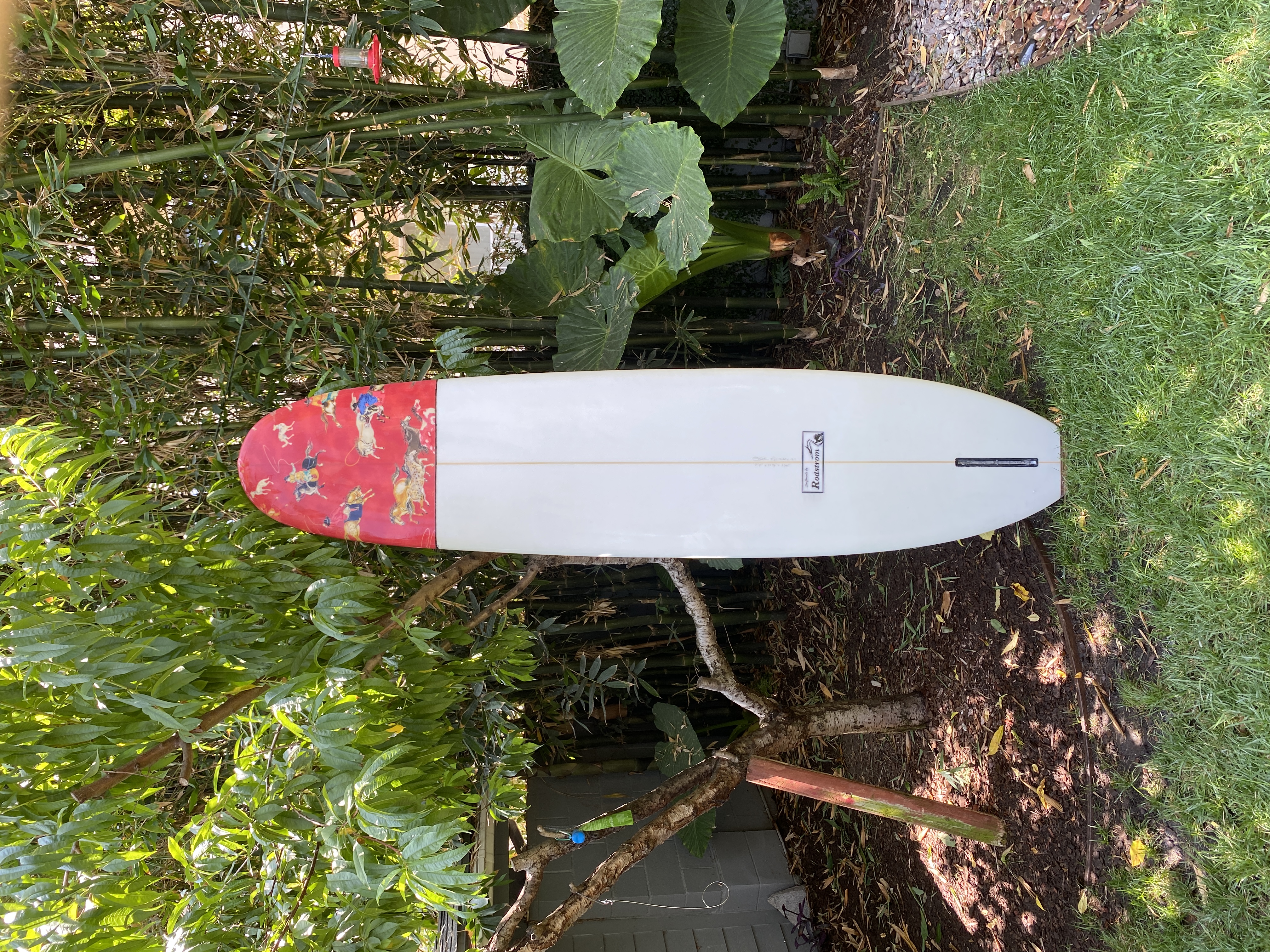 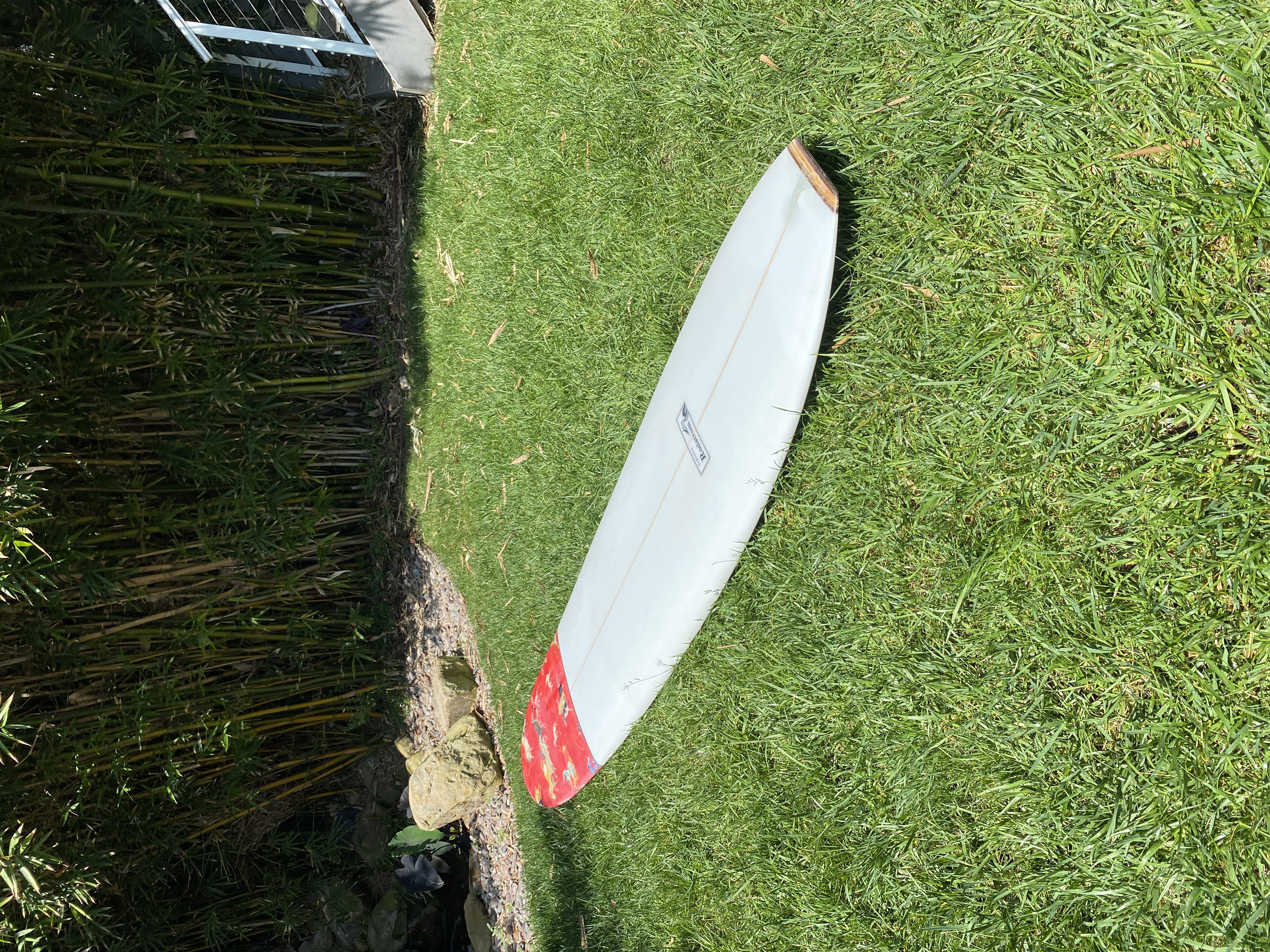 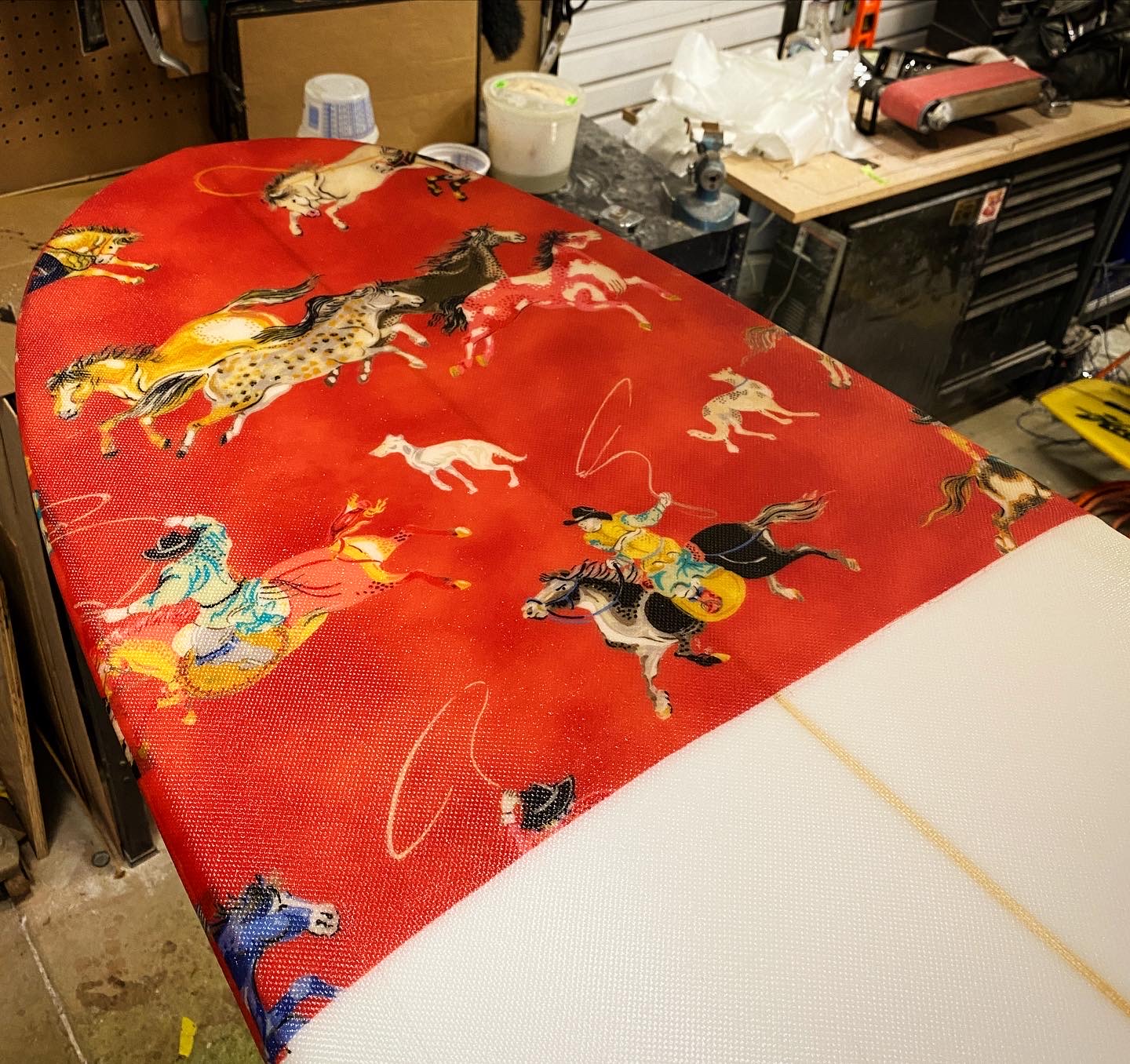 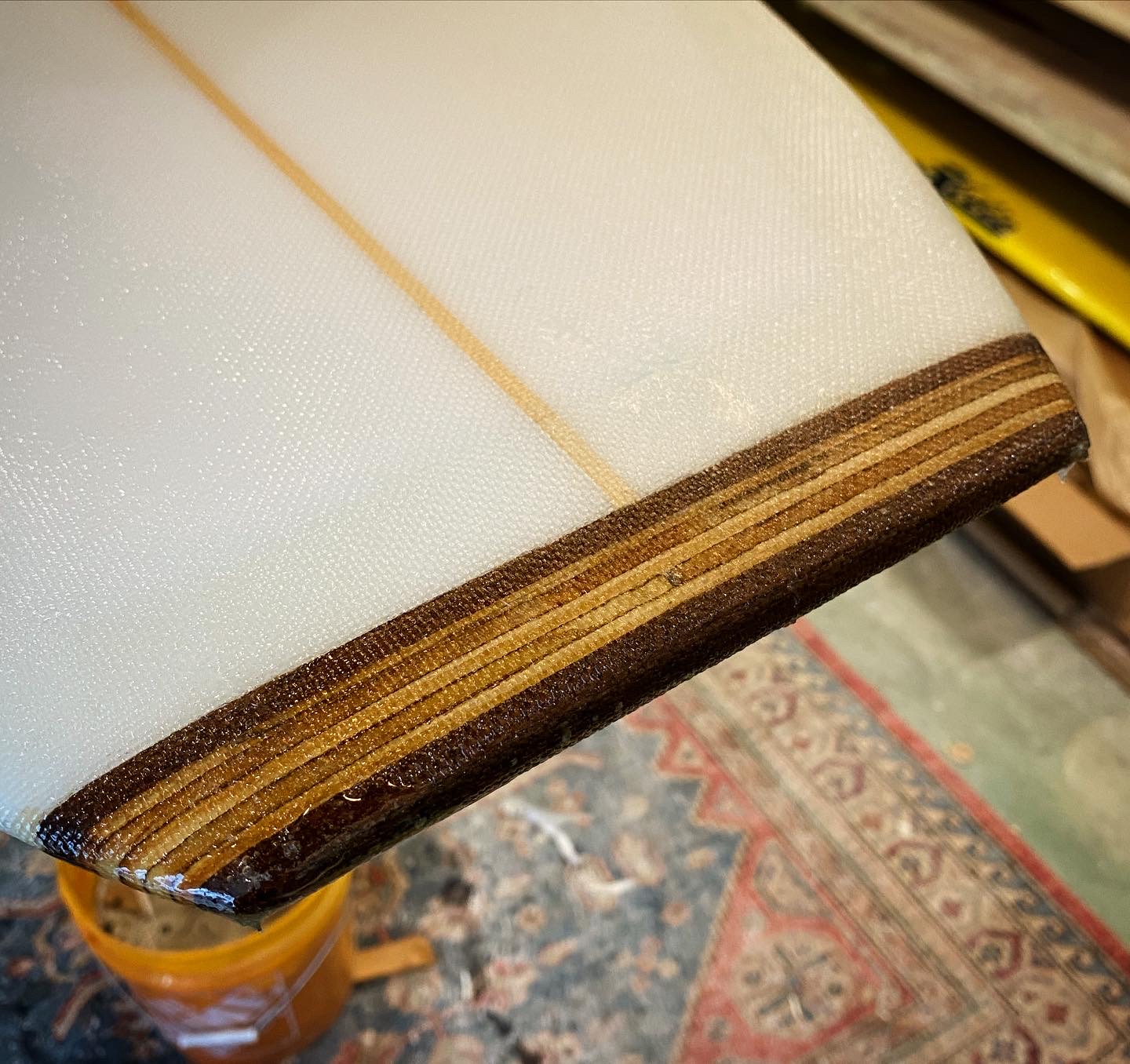 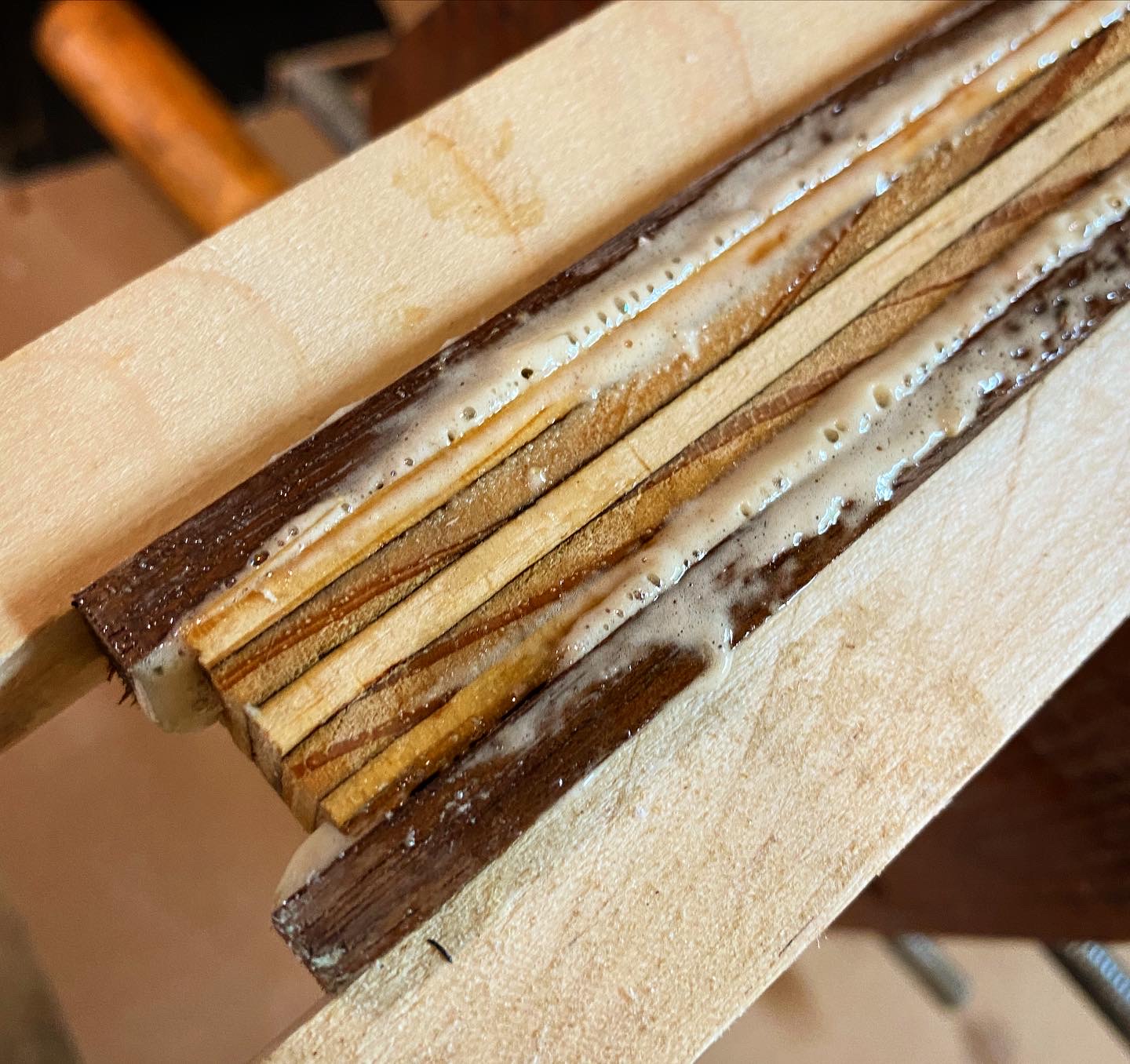 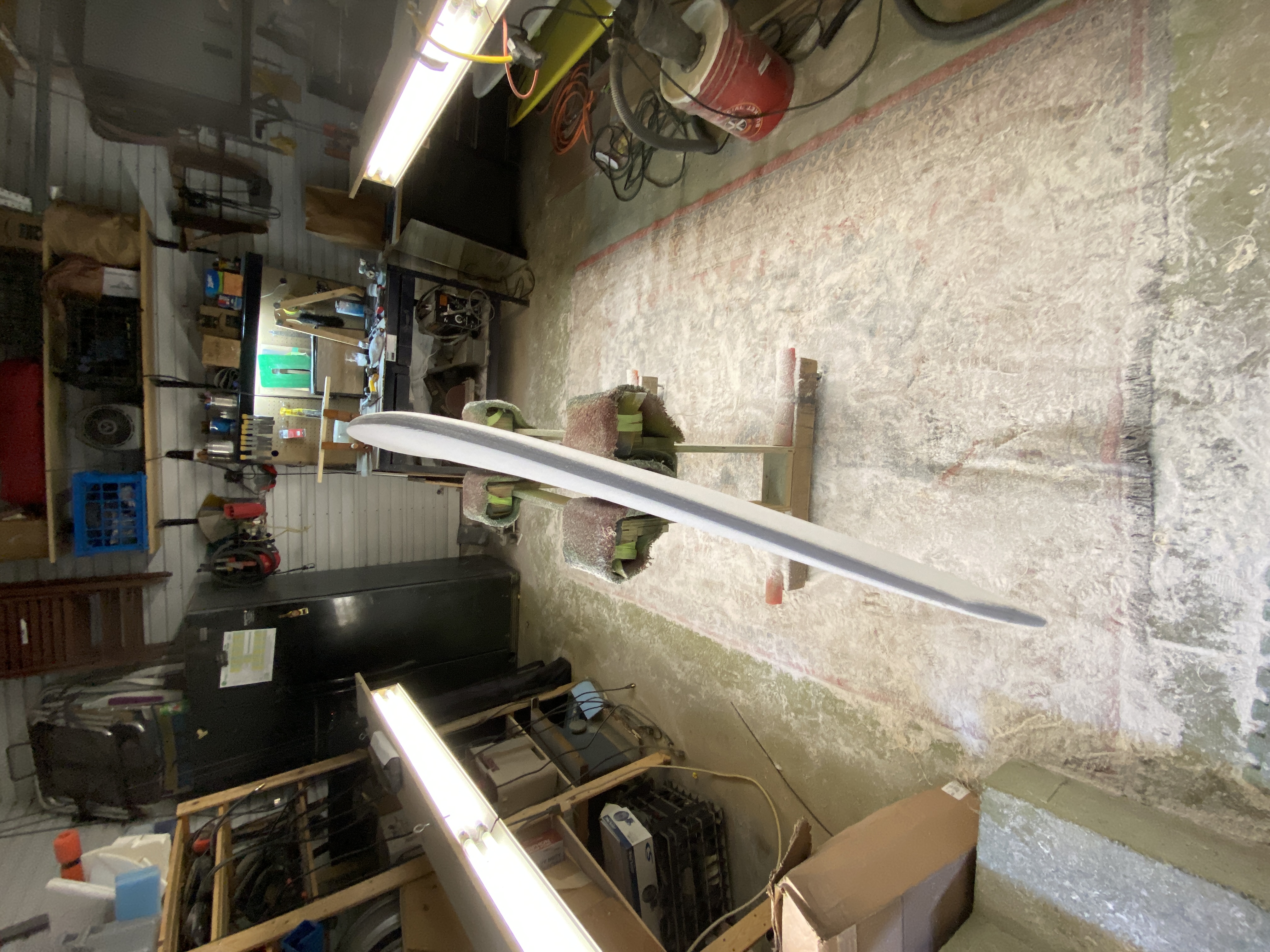 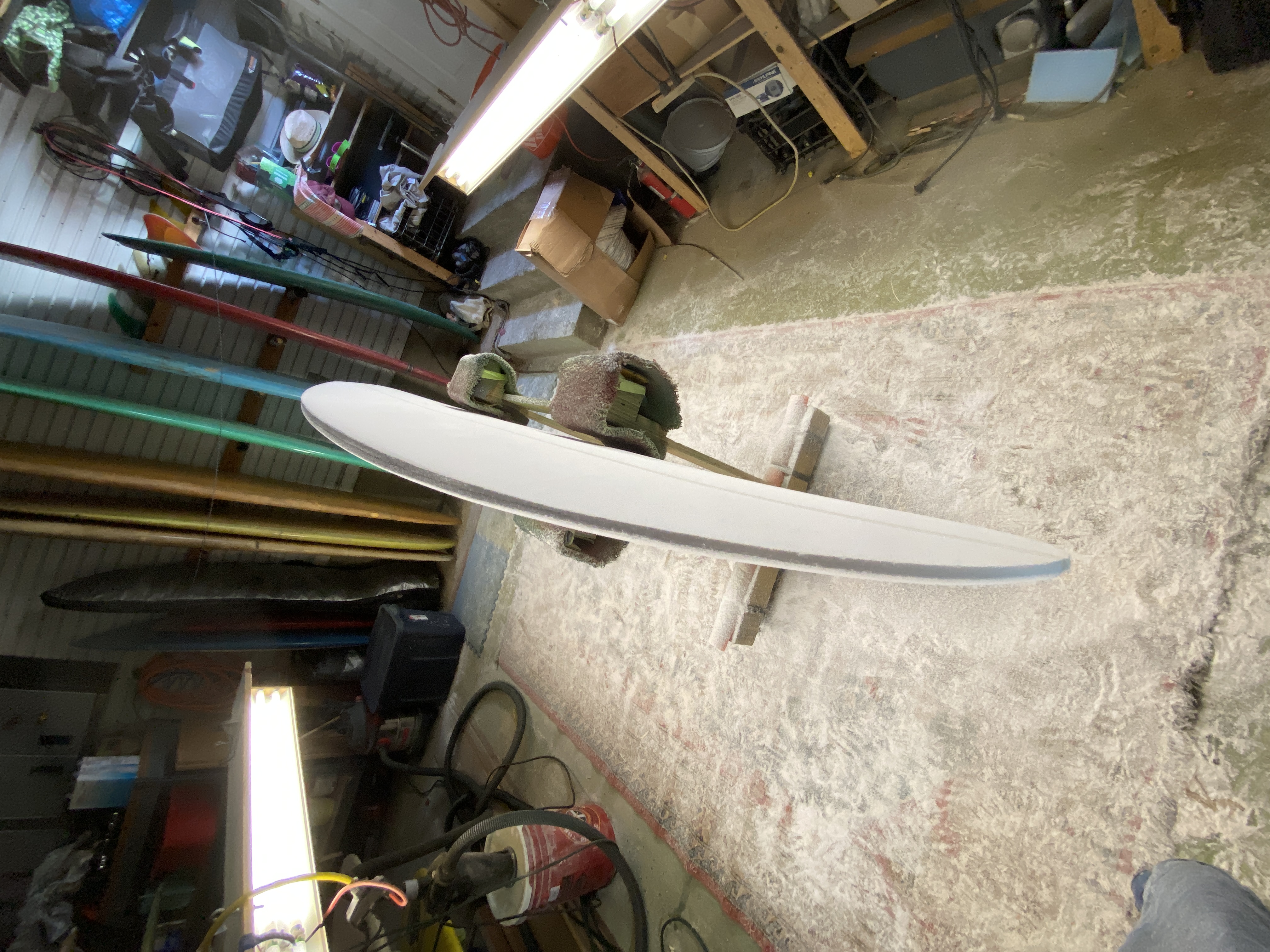 I read the different methods for tailblocks and inlays here on Sways, and chose to put my tailblock on after shaping before glassing. My glassing skills are not skilled enough to feather in glassing for the after glassing method. For me I wanted the glassing as an opportunity to mask my transition between the foam and wood. I think either method works and for other beginners I'd recommend using the method that scares you less and which uses more of your strengths.

I cut off my tail and shaped my block to closely match it on a belt sander, then attached using gorilla glue and fine tuned.

For the fabric inlay I was a little worried. I use UV cure resin and couldnt find instruction on that. So, for the inlay I cut my cloth to the shape like a deck or tail patch, cut my fiberglass cloth for glassing, then rolled them back to do my inlay and lams together.

I mixed a low amount of mekp in my resin for the inlay as I was afraid I wouldnt get UV through the fabric well enough to cure properly. Then I painted that batch of resin directly on the foam under where the inlay was going. (I'd marked it on the stringer in pencil)

I laid the inlay into that wet resin layer, got it placed how I wanted it, then poured the small bit of extra resin on the top and spread it in too - like all the writeups say, the inlay fabric soaks up a lot of resin before it's saturated, so I figured why not.

Then I rolled out my 6oz over it and glassed as normal with my UV resin. It appears to have worked.

Yes, you did a good job.  Shape and glass.  The tail lock before or after is usually dictated by whether or not the shaper has an "in house" glasser.  Himself or someone who works for him in the shop.  A lot of shapers wait until after, then glue the block and shape to fit.  Then his in-house glasser will glass the tail lock. It's an extra step and interrupts the process.   The idea is that there is less possibility for damage to the blank.  Because I have used a professional glass shop in years gone by; I put mine on before glass.  Do it enough and you can get good at it.  Lowel

I'm hoping to do a few more tailblocks relatively quickly to get used to gluing wood to foam and having things in place quickly. I visited my uncle in Humboldt this spring, and he gave me a 4x6x9'6 beam of old growth fine grain redwood that I'd like to slice into several stringers and glue up eventually in a few boards. I figure tailblocks and wood D fins are a nice baby step to start with. Hopefully by the time I can shape something worthy of the wood I'll also be able to glue up the blank with it too!

Once again a VERY nice job.

Velzy's Pig was so much easier to surf than most other boards of the era; especially in average surf. A big step forward.

I am not sure of it, but I have heard Velzy was the first guy to hang toes over the nose. At least on the mainland.

You will have heap o' fun on that stick.

Thanks Unclegrumpy I appreciate it - it's funny how addicting shaping is.

Just curious if the same thing might apply to shorter length boards ~6-8'?